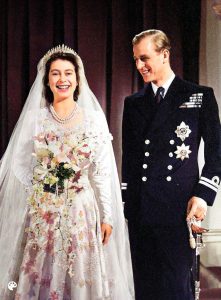 Princess Elizabeth and Philip, Duke of Edinburgh on their wedding day, 20 November 1947 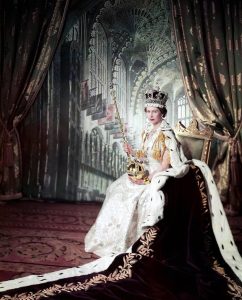 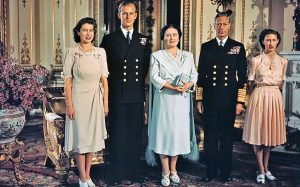 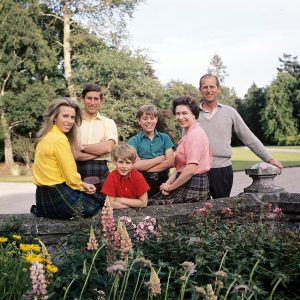 Queen Elizabeth II and the Duke of Edinburgh, with their children at Balmoral Castle in 1972 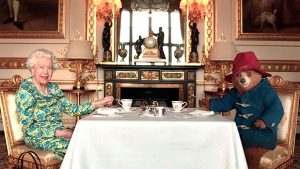 The Queen and her friend, Paddington Bear, having tea and marmalade sandwiches in 2022 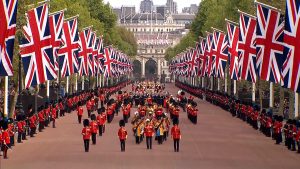 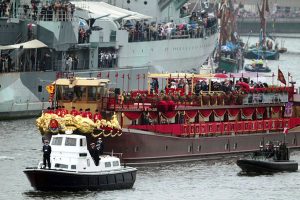 The Royal Parade on the River Thames, for the Diamond Jubilee, 2012

After ascending the throne at just twenty-five, Her Majesty Queen Elizabeth II gave a lifetime of service providing a bedrock of stability for the monarchy as the world shifted around her.

She was born on 21 April 1926, and died peacefully at her home at Balmoral Castle, Scotland on 8 September 2022, aged ninety-six. She was succeeded by her eldest son, now King Charles III, and in an address to the nation the next day, he honoured the memory of his mother:

Queen Elizabeth’s was a life well lived; a promise with destiny kept and she is mourned most deeply in her passing. As the Queen herself did with such unswerving devotion, I too now solemnly pledge myself, throughout the remaining time God grants me, to uphold the constitutional principles at the heart of our nation. And wherever you may live in the United Kingdom, or in the Realms and territories across the world, and whatever may be your background or beliefs, I shall endeavour to serve you with loyalty, respect and love, as I have throughout my life. 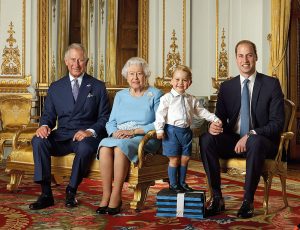 Queen Elizabeth II in 2015, with the direct line of succession—Prince Charles, the Prince of Wales; Prince George; and Prince William, the Duke of Cambridge

He paid tribute to his wife, Camilla, who becomes the Queen Consort, and to Prince William, who now inherits Charles’s title of Duke of Cornwall, he added:

Today, I am proud to create him Prince of Wales, ‘Tywysog Cymru’, the country whose title I have been so greatly privileged to bear during so much of my life and duty. With Catherine beside him, our new Prince and Princess of Wales will, I know, continue to inspire and lead our national conversations, helping to bring the marginal to the centre ground where vital help can be given.

Upon hearing of the Sovereign’s passing, The Hon. Anthony Albanese, Prime Minister of Australia, said:

With the passing of Queen Elizabeth the Second, an historic reign and a long life devoted to duty, family, faith and service has come to an end. It is a day of profound sadness and grief for the royal family who have lost a beloved mother, grandmother and great-grandmother. Australian hearts go out to the people of the United Kingdom who mourn today, knowing they will feel they have lost part of what makes their nation whole. It is a time of mourning for the people in Britain, across the Commonwealth, and indeed around the world.

The Commonwealth of Nations is a political association of fifty-six member states, the vast majority of which are former territories of the British Empire. King Charles III is now the Head of State of fifteen Commonwealth Realms, while thirty-six other members are republics and 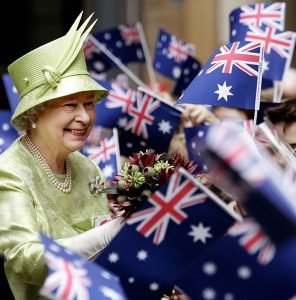 The Queen after the Commonwealth Day service in Sydney, March 2006;

five others have different monarchs.

Until her death, Queen Elizabeth II was Head of State of Papua New Guinea, where she was known as ‘Missis Kwin’ and ‘Mama bilong bik famili’ in Tok Pisin. She was represented by the Governor-General, who is nominated by the country’s parliament, and had a close connection with Papua New Guinea, making three royal visits during her long reign of over seventy years.

After the Commonwealth Games in New Zealand, the Queen visited Papua New Guinea with her husband, the Duke of Edinburgh, and daughter Princess Anne with her husband Capt. Mark Phillips and Lord Louis Mountbatten. During this time, the royal party toured Rabaul in New Britain, and Goroka, where the royal party drove around the showground in an open vehicle. People came from as far as Mount Hagen, 200 miles further into the mountains, to put on the biggest display of their finery and their war dances that the Highlands have seen. The famous Asaro Mudmen in clay masks were there, the Moss Men wore ropes of weeds, the Lufa Men had their towering headgear and thousands of others donned colourful skins and leathers.

They later flew to Lae, where the Queen laid a commemorative wreath at the cemetery, and then to the capital, Port Moresby, where they were greeted by a 21-gun salute. 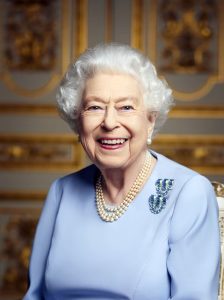 The Queen on her Platinum Jubilee, 2022

Queen Elizabeth and Prince Philip returned for the Silver Jubilee in 1977 when she toured Port Moresby, where she was presented with a headhunted trophy, complete with heads, at a ‘people’s welcome’ at a sports stadium after she had presented a new Queen’s Colour to the Pacific Islands Regiment. She walked briefly among traditional dancers before attending a state luncheon. The next day the royal party flew to the provincial centres of Popondetta and Alotau, in eastern Papua.

The Queen and the Duke visited Port Moresby again and also Mt Hagen in 1982, after the XII Commonwealth Games in Brisbane. They arrived in Port Moresby, where more than 100,000 people in traditional dress greeted the couple, before an official welcome from Prime Minister Michael Somare, followed by a state reception. In an arrival speech, the queen congratulated the country on the progress it had made since her last visit:

It reflects great credit on the leaders and the people of Papua New Guinea, who have accepted the challenge of creating a nation and bringing it thus far into the modern day and age after so many centuries of isolation. God be with you till we meet again.

When Prince Charles journeyed to Papua New Guinea in 2012 for the Queen’s Diamond Jubilee Celebrations, he spoke to crowds in Port Moresby about his mother’s reign and her special relationship with the country: 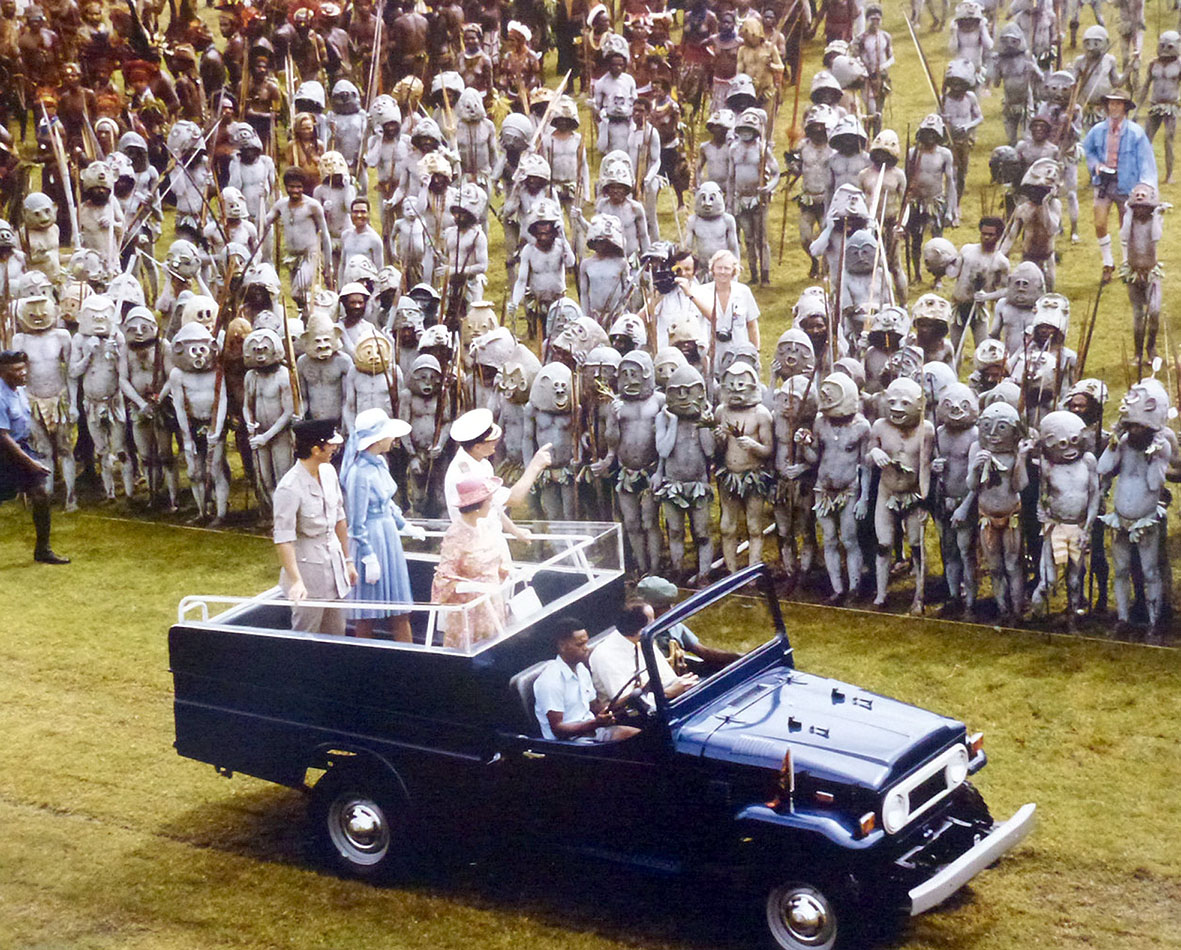 Capt. Mark Phillips, Princess Anne, Queen Elizabeth II and Prince Philip waving to Asaro Mudmen at Goroka Showground from a jeep during the royal tour in 1974 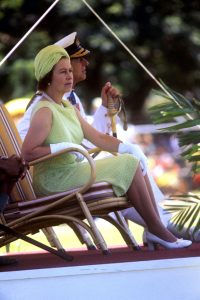 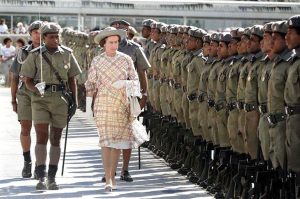 The Queen inspecting the guard in Alotau, 1977 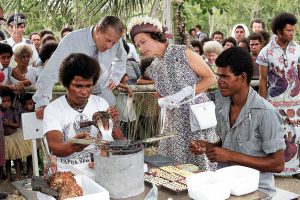 The Queen and Duke examining pearls from Saribu Island, 1977 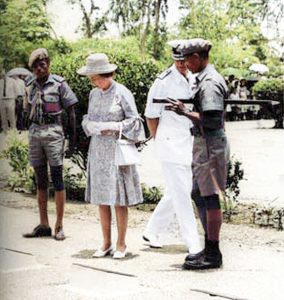 The royal couple laying a wreath at Lae Cemetery, 1974

This is a great day and a magnificent spectacle. We are gathered here to celebrate the Queen’s sixty years of service to others. I know how honoured Her Majesty is to be your Queen, a title borne by her with immense pride and renewed by the people of this great country upon Independence in 1975.

Though she did not get involved in government matters in Papua New Guinea, Her Majesty continued to play an important symbolic role, and PNG Prime Minister James Marape stated, upon her death:

Papua New Guineans from the valley and coasts rose up this morning to the news that our Queen has been taken to rest by God. She was the anchor of our Commonwealth and in PNG we fondly call her ‘Mama Queen’ because she was the matriarch of our country as much as she was to her family and her Sovereign realms. God bless her Soul as she lays in rest, and may God also bless King Charles III. Her Majesty’s people in PNG share the grief with King and family.

After a period of public mourning, Queen Elizabeth II’s State Funeral took place at Westminster Abbey in London on 19 September 2022. This was attended by her family, members of Europe’s royal families, world leaders, including Australia and Papua New Guinea, and representatives of charity organisations, among many others. Her coffin was borne by soldiers from the Queen’s Company, 1st Battalion Grenadier Guards. 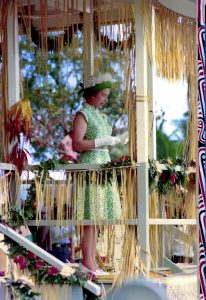 Later, Her Majesty was laid to rest in the King George VI Memorial Chapel at Windsor Castle, alongside her beloved husband, Prince Philip, the Duke of Edinburgh, who died last year. 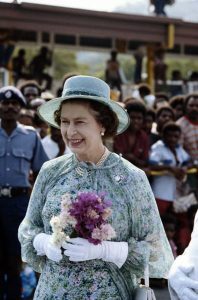 Queen Elizabeth II on her arrival at Port Moresby, 1982 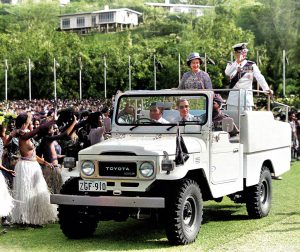 Queen Elizabeth II and Prince Philip, Duke of Edinburgh, at the Sir Hubert Murray Stadium, Port Moresby, during their royal visit in 1982 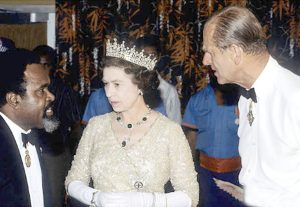 The Queen and the Duke of Edinburgh with Prime Minister Michael Somare, at a state reception, Port Moresby, 1982 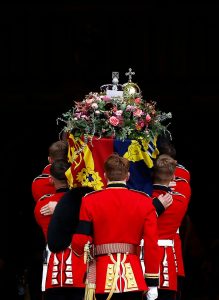 Pallbearers at the funeral