After a number of delays, with time to reflect on why my flight the previous day had been turned around en route, I finally found myself travelling high above the highlands of Papua New Guinea. From my seat in the sky I could see mountain tops peaking through soft clouds and clusters of small village huts dotted throughout the jungle below. This was my first trip to Goroka, a location that had been on my bucket list for a while, and now, thanks to my involvement in a project with UNICEF PNG, I found myself about to land. Exciting!

The fresh produce market was a field of colourful umbrellas that seemed to extend for miles, protecting the vendors from the scorching sun and the rains when they came. I just love exploring markets so I was itching to jump out of the car and dive into the colour around me, but I was here for work and already a day late, so we headed straight to the office to meet the ground team. The fresh air and cooler temperatures immediately embraced me as I disembarked, and I took in a deep breath, instantly invigorated by the higher altitude. Exiting the airport gates, I was surprised to discover that we were driving through the centre of Goroka town, literally! Here, the airport meets the city centre; locals busily go about their daily business and the streets are lined with an array of market stalls selling everything from baskets to bilums and of course the ubiquitous buai!

I was about to meet the TTU (Touching The Untouchables) team who were working in partnership with UNICEF and European Union (EU) to implement the Klinpela Komuniti Projek, a pilot Water, Sanitation and Hygiene (WaSH) project aimed at improving the standard of living for women, men and children through improved hygiene and sanitation practices.

I had heard a little about WaSH before my involvement with UNICEF, however, it would be my first real introduction to the initiative as I stepped foot into my role as a photographer and scoped out locations and talent for a series of videos our team was producing. The targeted community in this case were those living in rural areas on the outskirts of Goroka. As a documenter and explorer, I am endlessly excited about heading into unknown territories and collecting stories, however, there was an element to this brief that I wasn’t initially too excited about: photographing people’s toilets! First of all, I thought that people might feel ashamed or embarrassed to show me their toilets. 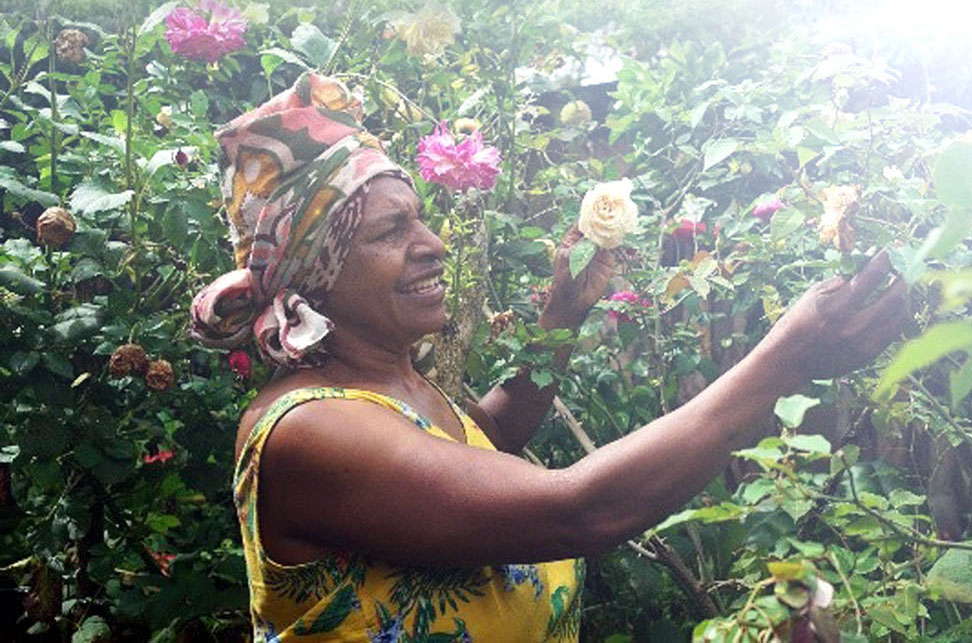 Iva Iso smells the roses in her garden 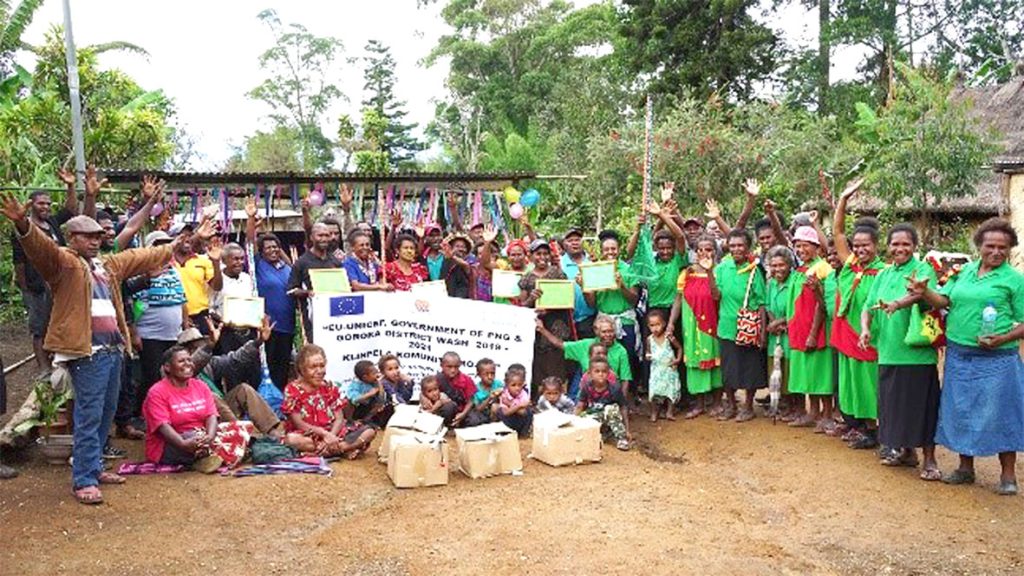 Secondly, I wasn’t completely compelled by the idea of getting up-close and taking detailed shots of places where people excrete their waste. I have to admit, it wasn’t exactly what I had imagined doing on my first trip to a bucket-list destination!

I was to be proven wrong on all accounts, reminding me that my preconceptions echoed a life of privilege, where access to clean, safe water and modern septic systems was just something I took for granted. I was very happy to discover that far from being embarrassed to show me their toilets, the local residents took great pride in displaying what was the realisation of a major milestone within their communities. They had worked together to achieve ODF (Open Defaecation Free) certification through the implementation of VIP toilets (Ventilation Improved Pit), the installation of tippy taps or other water sources nearby with which to clean hands easily and effectively, and a range of other hygienic practices that have delivered positive outcomes.

The effects of poor sanitation and hygiene can have a crippling impact on virtually every aspect of life—nutrition, health, growth and development, the economy and also upon one’s sense of dignity and self-empowerment, contributing to an omnipresent cycle of poverty and deprivation.

I very quickly came to understand why every person I met in the village invited me with a big smile on their face to check out their lovely loos! Inspecting each VIP toilet became a real delight. Each family had designed their toilet houses themselves, often adding personal touches to adorn and embellish their outhouses.

Decorative bamboo walls, flower pots and even a vintage-styled outhouse with old number plates on the walls! I was super-impressed by the colourful, welcoming, clean outhouses and guess what? There were no smells! The VIP system produces a continuous airflow through the ventilation pipe. The airflow vents away odours, assists waste breakdown by drying action, and acts as a very effective fly control mechanism. 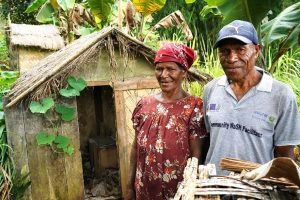 A couple from Sami and their new toilet

I have travelled through a number of developing countries around the globe, and I have experienced my fair share of smelly pit and squat toilets. I can without hesitation say that these pit toilets in Goroka were the most impressive and cleanest I’ve ever seen! I would stretch that impression to charming. And when nature called, I had zero hesitation in asking to use one. In a number of the villages I visited I learned that it was the women who were responsible for leading the drive in their communities to improve hygiene and sanitation practices.

In Kabiufa village I was told a story about a team of eight elderly women who took the initiative to dig out the pits for thirty-three toilets in their community. In Komegu, the story was similar, where women took charge of digging out the pits for the toilets, and the children were put in charge of digging the holes for rubbish pits and making the tippy taps. Both these communities received their ODF certification during my visit, with one woman from Komegu speaking passionately at the certification ceremony about the direct impact these changes have made on the people living in the village.

‘Before the program,’ Rose Ken said, ‘the village was filled with rubbish; kids and mothers were sick with diarrhoea, but now everything is much cleaner and people are healthier.’ 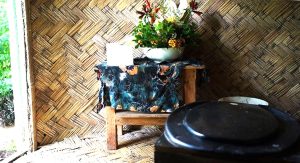 Kay Kay Ezave was nominated the winner of the Kabiufa village ‘Best VIP Toilet’ for her innovations in creating a double-pit toilet that was separated by a wall, with one side each for males and females. She also used an old sink placed on the ground to collect grey water from her handwashing station to allow the water to drain away nicely and prevent it from creating a muddy mess.

As part of achieving ODF status, families are encouraged to implement the ten steps for health and hygiene, which include: 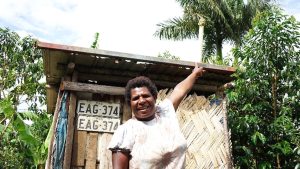 Rebecca Sari points to her ventilator

My favourite part was to inspect the beautification throughout the villages. Tidy pathways lined with well-trimmed trees and bushes; flower beds blooming with fragrant and brightly coloured flowers, showing off the best of Goroka’s florals; and backyards with bountiful nutritional garden produce and fruit trees, replete with fruit easily plucked from their branches and offered to me to take home or to eat right there on the spot. Happy villages, with friendly, funny, thriving people unashamed to put their warm outgoing character on display, and proud to put in the hard work to better the lives of their community.

After a week on the ground it was time to head back to Port Moresby and back to a home that has all the modern facilities to which I’ve always had access. With me I took the experience of the engaging and unpretentious Goroka people who reminded me of the simple things in life for which we should be grateful—an adequate supply of clean, safe water for drinking, cleaning and washing in as well as a clean flushing toilet.

When I think back now on my first trip to Goroka, I see the many smiling faces that welcomed me without reserve into their villages and of the people who invited me to sit inside their newly-constructed outhouses with such pride that those smiles spread wide across their faces. It was an experience that demonstrated the power and impact guidance and leadership can have on a whole community; sometimes all you need to do is pick up that shovel and start digging.

Editor’s Note: This story was originally published in PNG Air Magazine whose editor has kindly agreed to its re-publication in PNG Kundu.