In 1937, English nurse Constance Fairhall, known to her colleagues as ‘Paul’, started a hospital for tuberculosis and leprosy on an island in Port Moresby harbour called Hanudamava, better known as Gemo. 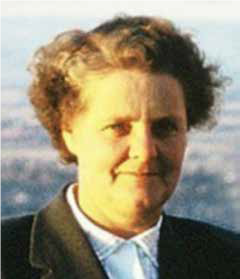 In 1934, the London Missionary Society (LMS) had appointed Paul to work in Papua. She held clinics in the group of villages known as Hanuabada, close to Port Moresby. Paul observed a high incidence of tuberculosis and leprosy. Due to weakness and deformity, people with these diseases were unable to join in community work such as gardening, fishing and building projects, so they were left at home minding the children. Paul realised that caring in isolation was needed. The barren island in the harbour was suitable.

Representatives of government and mission negotiated with the twenty-nine landowners hoping they would agree to sell. Instead, to Paul’s amazement, the people replied: ‘If the hospitals are to be for us we will give the island unconditionally for fifty years’. Thirty-seven years later, the same authorities of church and government returned the island to the owners, though it took the community some time to sort out just who were the owners!

In the 1930s administration of the Territory was simple. By visiting Government House, Paul got agreement from Lieutenant-Governor Sir Hubert Murray, and he sent his carpenters to build the hospital. There was a complication when the two buildings were built side-by-side. So Paul went back to Government House. These are the words from her book, Where Two Tides Meet:

I was summoned into the presence of His Excellency. Uncurling his long legs, and looking at me from beneath his drooping eyelids, with sleepy eyes that yet see so much, Sir Hubert Murray said, ‘I hear you are not satisfied.’ I explained my dilemma, ‘What do you want, another hospital?’ I walked down HE’s beautiful drive singing!

I have it on good authority that tea was served on visits to Government House and milk, in Territory style, was taken from the condensed milk tin, with toothpicks in two holes! 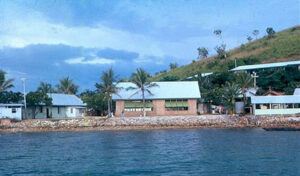 There were two wards for tuberculosis at the wharf end and one, for leprosy, a few hundred yards away. There was risk of patients with the two diseases living close, but it was a step in better care.

The rocky, almost treeless, hummock of 128 acres was about a mile and a half long, and three miles around its shore. In December 1936, Paul described it thus:

The Island is very beautiful in some ways. For almost eight months of the year the wind blows in from the sea, which helps in this climate. If we turn round we face the mountains, and sometimes in the hot wet season the wind blows straight across from them. The water around the island is lovely and calm for fishing, and so clear and clean that the villagers have long held the belief that if you bathe in the water after being ill, you receive back your strength. Sometimes the captain of a passing trading canoe will order his men to bathe there that they might be strong for the voyage. A pool of Siloam. It augers well for the future.

The only flat land on Gemo was at the end where tidal changes created a pebble spit pointing towards the nearby mainland hills and Napa Napa Bay. The other side of the island faced Port Moresby and Paga Hill across three miles of sea. Hanuabada and a number of other villages hug the shore within the harbour. There was no road around the thirty miles. All transport was by sea.

The island had a unique life during thirty-seven years. Not only did it serve the people of Hanuabada, but patients from all over Papua New Guinea were treated there. The general hospital and medical school of Port Moresby brought students to learn, and streams of visitors, at times the bane of our life, but giving a better understanding of tuberculosis and leprosy.

The staff lived on the island with families growing up in this environment, educated at the same school as patients; the lifestyle that evolved was a microcosm of what was happening in Papua and New Guinea over the years. Students of Gemo school went on to higher education and university and some played leading roles in the formation of the nation of Papua New Guinea that was born on 16 September 1975, just a year after Gemo closed.

Paul’s hospital was a combined project between LMS and the Administration. On 5 October 1937, an assortment of small craft sailed from Hanuabada to Gemo and Paul, and her small team, settled in to the daunting task ahead. The early days are chronicled in her book, Where Two Tides Meet. The tides meet in the spit of land where the first wards were built. It was Paul’s hope ‘that the tide of suffering and superstition would meet the tide of healing and love’.

Paul’s drive, impulsiveness, pioneering spirit and adventurous faith led the small community of patients, relatives and staff through the years from 1937 to 1941. Fear of separation from the community, and the realisation that they might not recover were uppermost in many patients’ minds. With no specific treatments, hygiene and a healthy diet played a big part. 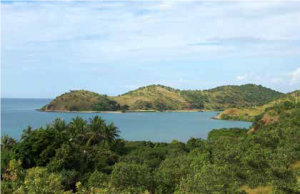 The waters around the island were rich in fish and shellfish. Basic rations were provided, but so, too, was a fishing line and even those too ill to walk, could dangle a line from the verandah, or drop it through the holes in the floor, conveniently cut at intervals for sweeping and washing. There could be no boasting about the size of the catch when it had to come through a small hole!

Dressings were removed and burned on the shore and sores bathed in the sea. Toilets and showers were cubicles at the seaward end of the wards. The Administration doctor from Port Moresby visited periodically. There was school, handcraft activities, making things that could be used in the hospital, sports, games, music, prayers and Bible study, and despite the suffering, disabilities and death there was a spirit of happiness. Gemo earned the name Happy Island and the name stuck through good times and bad.

By December 1941 the Japanese had invaded New Guinea and were making inroads into Papua. The Owen Stanley Range that forms the ridge between Papua in the south and New Guinea in the north were proving a formidable barrier. A war was being waged between foreign forces and the local people were caught in the midst. Villagers were evacuated for safety. Papuans learned to eat rice as their staple diet. ‘Raisi mo ianina lalo a hesikiu’ is still a popular song and means ‘I am tired of eating only rice’.

Gemo was vulnerable and had to be closed. Patients and staff went home, which meant the inevitable spread of the diseases. A few leprosy patients remained in a shack on the hill. Australian and Allied forces used Gemo as a base hospital. Paul spent time in Australia as an army nurse but her one aim was to return to Gemo which, I believe, is now involved in the LNG harbour terminal.

Constance Fairhall had three small books published by the London Missionary Society during her time in Papua. Copies may be in the PNGAA Collection. They are: Where Two Tides Meet, Island of Happiness, and Some Shape of Beauty.