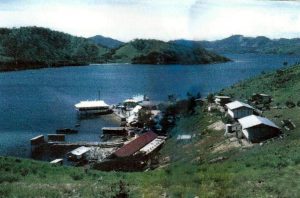 In July 1946, Sister Constance ‘Paul’ Fairhall returned to Papua and was able to round up patients, old and new, and with some original staff, return to Gemo. It had grown from three to seven wards with tin sheds serving as dispensary, theatre, store and X-Ray room, without a machine! The hospital was still a mission-government joint venture but on more defined lines. Paul brought a second sister, Rachel Leighton, from Tasmania. Paul’s experience of the country led to her relieving on mission stations while missionaries were on leave. Rachel was soon at the helm of Gemo, where she remained for fourteen years. She learned Motu and started training the medical orderlies. They were examined by the health department and given Administration Servant grading. Their numbers increased. Some came as a patient or accompanying a patient. Some had served as carriers or aides in the war. They took on additional roles such as clerk, storeman, carpenter and mixed skills. They married, reared families, and moulded Gemo into a remarkable community.

By the time Gemo closed in 1974 the twelve men still on the staff had a total of 200 years’ service. They were the backbone of the community. Paul’s second book on the years from 1946 to 1950 was called Island of Happiness. In 1956 film producer Maslyn Williams, while making a feature film on PNG, made a short film on Gemo called Happy Island. It is still around today.

The ancient army refrigerator minus handle, trays and chimney top consumed kerosene all day but remained warm. Finally, we stood it on its head, slapped it and said ‘words’ to it and now it works. The stove does too, with its bottom held in place by wire. Rachel’s first bucket shower dropped a downpour on her head. She has a grand sense of humour though last night, on her way to the small house out the back, a flying fox swooped on her instead of his intended pawpaw [which] was unnerving!

The health services were more organised. Gemo was supervised by European Medical Assistants (EMAs) and doctors. From the 1950s Dr Stan Wigley was the tuberculosis specialist and Dr Douglas Russell the leprologist. Drugs, dressings and rations were supplied.  A launch did return trips three times a week. It was the beginning of forms, reports, audits and inventories. Rachel was called matron. In subsequent years the staff never addressed future sisters thus. I arrived on Gemo a few weeks after Rachel left in 1960. I learned not to question an action if I was told ‘Matron did it this way.’  On her first leave, Rachel recruited secretary Jennie Beighton from Melbourne.

In the postwar years people drifted from villages to the city seeking work and the bright lights. Infectious diseases were spreading. The Gemo population grew; records show between 300 and 400. They lived in reasonable harmony united by illness. Gemo was a microcosm, reflecting the diversity of PNG. Paul once recorded about forty different languages on the island.

A unique part of the team was the labour squad of long-term prisoners from Port Moresby gaol, with a policeman in charge. He had a gun with one bullet for emergencies, which he left with one of the prisoners when off duty. They were accommodated and fed. They had a good lifestyle and did the heavier work. Some prisoners on completing their sentences were employed in the hospital. The policeman and his family were so much at home that his leave was spent on the island. He and his wife fostered children, as was sometimes needed when a mother was sick or died, or a lone child admitted.

Other sisters were recruited to assist Rachel when Paul was elsewhere. Anne Cole, an English sister, had not been there long when a boatload of new patients arrived at Gemo from the Gulf District escorted by an unwashed and bearded young man, who Anne did not think much of, but she used to say he cleaned up remarkably well and introduced himself as the Rev. Herbert Brown, missionary in charge of the Moru District.1 They married and worked together in the Gulf for many years and their remarkable story is told in the book, Bert Brown of Papua.2

Avis Martin from England arrived in 1947 and spent a year on Gemo before being moved to Kapuna in the Gulf where she became involved in the development of Maternal and Child Health nurse training for the next twenty years. Another tale worth recording.

Sister Gwladys Clatworthy, worked with Rachel in 1949. Rachel went on leave and returned in a fashionable suit, hat and gloves. Not the sort of clothes for Gemo but just right for Gwladys to go to Sydney the next day on leave. Life changed for Gwladys on that leave and she returned to Papua as Mrs Frank (the Reverend) Butler.  They were district missionaries at Metoreia, the mission at Hanuabada, for twenty years.

In 1950 three LMS recruits arrived and were introduced on Gemo before being appointed elsewhere. Rachel decided Joan Phillips was right for Gemo and the other two went elsewhere.  Over the next twenty-three years Joan was involved in leprosy and tuberculosis, but her main contribution was the development of an associated leprosy and tuberculosis clinic at the Orokolo Health Centre in the Gulf, where many Gemo patients came from.

Lenna Wadsley was a friend of Rachel’s from Hobart. In 1954 she visited Gemo, and loved Papua so much she stayed and worked at the Port Moresby General Hospital at Ela Beach. She spent weekends on Gemo. On Saturday afternoons Rachel would set her to work in the kitchen baking for the following week’s visitor teas. Her eckles cakes were in great demand. About 1957 Jennie went on leave and Lenna was given time off from her job to relieve in the Gemo office. In 1961 she was back relieving Jennie when I was on Gemo.

In 1949 the first Samoan sisters joined the team, and over the next fifteen years carried on the Samoan link started by Auana and Vaaiga who, near retirement, offered to help Paul in 1937. By the sixties, nurse training was established in Papua. Government policy decreed that Samoan nurses would only be accepted if they had New Zealand or equivalent certificates in addition to their Samoan training. So, this valuable contribution to Gemo staff was gradually phased out.

In the 1950s new drugs improved the treatment of both diseases. In the 1960s physiotherapy and reconstructive surgery helped leprosy disabilities.  Specialist staff with physiotherapy and laboratory skills were added, and a builder to rebuild the old hospital. This was the era of short-term overseas volunteers who brought new life to Gemo.

New drugs, surgery and a better understanding of infectious diseases reduced the need for isolation, and management of both diseases was absorbed into general health services. In 1974 Gemo, and similar institutions, were phased out. I was the last Gemo sister. Some of the staff were ready for retirement and a few moved on to hospital or village aid post work. 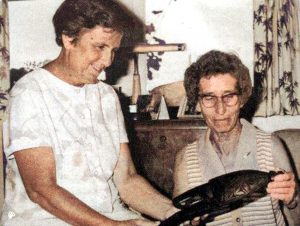 Joan Phillips and Constance Fairhall in 1971, when they left Papua after a total of sixty years service

Editor’s Correction: The photo in PNG Kundu, June 2020, page 24, was incorrectly attributed as Constance Fairhall. It was a photo of Avis Martin, another LMS sister.