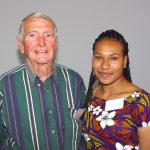 In December 2018 we hosted two University students from the PNG Highlands here in Benalla in North East Victoria. These were Gita Korimbo from EHP, and Vivian Kiyo from Porgera. They had both been awarded Leigh Grant Vial Memorial Scholarships in 2014 for their final school years at Goroka Grammar (see Dec. 2019 Una Voce, pages 15 and 40).

During their visit they mentioned their respective village schools were short of supplies, especially story books and readers in English.

With the help of friends, we collected some 45 suitable pre-loved books, and in April sent them to Sogopegu, Gita’s village near Bena; which coincidentally was near the place that Leigh Vial died in a plane crash, in April 1943, while guiding a US Air Force plane, dropping supplies to an Australian Commando Patrol. 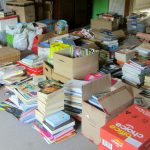 Last June I was in Goroka for the Scholarship awards and was invited to visit Sogopegu. The village welcome and thanks were overwhelming. The welcome was from warriors, young and old in traditional costume, and a long avenue of 250 young school children all very smart in their school uniforms. At the far end of the avenue was a dais of local dignitaries, including the Inspector of Elementary Schools, and the Inspector of Primary Schools for the Eastern Highlands Province. Lots of speeches and gifts, all watched by scores of villagers, sitting on the grass under their colourful sun-umbrellas – all in gratitude for a gift of 45 second-hand children’s books.

On my return home to Benalla with pictures from the village, I suggested to the Friends of Benalla Library that we ask the community for suitable children’s books for elementary and primary village schools. 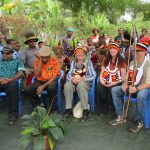 The response from Benalla and surrounds has been wonderful. The three collection points (Benalla Library, Benalla U3A and the office of Steph Ryan MP) overflowed in no time, with children’s books from the library, grandparents’ cupboards, the four local primary schools, and the four opportunity shops. Between August and mid-November we received several thousand books, and we had to pause collecting any extra.

One year seven student from Cathedral College, Wangaratta collected over 400 books and has some great ideas re further support in the form of computers/notepads and setting up email “pen pals”.

Our objective is to help introduce English early in village student’s school years, so that when they reach high school, where teaching is all in English, they are not at a disadvantage. 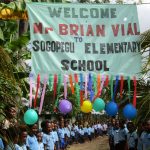 In the towns in PNG English is commonly used, but in the villages most conversations are in pidgin or the local dialect. All teacher training includes English, but they have few resources to read from, or teach in English.

Of the 35 boxes dispatched so far, most have been in cartons of some 90 to 100 books to be given directly to a village school.

Collecting books turns out to be easy, and having multiple contacts in several Highland areas helps with distribution to suitable villages. The hardest part is finding an affordable transport solution. This January, we were able to send 20 cartons in a charity container from Brisbane, which was a wonderful help. Special thanks must go to Renee (Project Yumi), Georgie (LinFox) and Carmel (StarTrack) for rescuing us when most of the transport industry was still on holiday. But we have plenty more books waiting to be sent, so any suggestions from readers would be welcome. Contact me via Yana, PNGAA Victorian Regional Coordinator; coordinator@pngaa.net 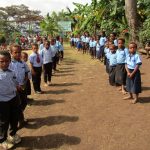 From my two tourist and six scholarship visits to PNG since 2010, I can only agree with the ABC Correspondent describing it as a land of smiles. I have found a people very favourably disposed to Australians, and hoping for opportunities to work together.

I have also been heartened by the interest and support this program has received from the Benalla community. It is regrettable that Australia seems to have forgotten the long and close relationship our two countries shared in war and peace, not so long ago.