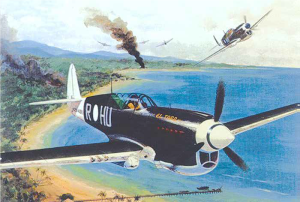 18 April 1944 was the day that General MacArthur’s liberation force took Aitape and Hollandia, the largest amphibious operation of the South Pacific War. Within 42 hours of the landing, No. 62 Works Wing of the Royal Australian Air Force had Tadji Airfield ready for the Australian Kittyhawks of 78 Fighter Wing to land. The airstrip was a soggy mess—Flight Sergeant Arch Simpson RAAF tells the story.

‘We set off from Cape Gloucester in West New Britain on the long hop to Tadji Airstrip knowing that there was, as yet, nowhere for us to land—no properly prepared strip, only an area that had previously been a small enemy airstrip.

On the plus side there had been a previous softening up of the place by naval bombardment and air strikes, and we were reassured by the fact that our assault troops, ground support and strip building units had gone ashore and were rebuilding the strip.

Even as we took to the air, additional landing barges were at the beachhead unloading all the necessary supplies, including Marsden matting, to set up a brand new, functional operational base.

So away we went with blind faith.

RAAF ground forces began work on the airstrip at Tadji only a few hours after its capture. When we got to the point of no return on our westward flight—not enough remaining fuel for us to safely get back to friendly territory—we contacted the landing party, and they informed us ‘Come on in, we will have the strip ready by the time you get here.’

On we went, to arrive over our destination where this rather rough looking area of what looked like a road under construction awaited our arrival.

Billie and I were ordered to maintain a patrol while the others landed, for there was still only a narrow perimeter around the strip in our hands. 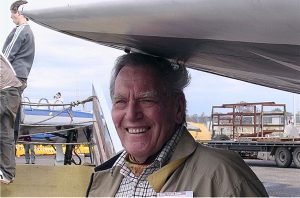 But then, goodness, one of those landing suddenly flipped over onto his back without going far along the strip in his landing run.

What had happened was the strip was right on the coast and only a couple of feet above sea level, and bomb and naval shell craters from the previous softening up were deep enough to penetrate the water table and allow them to fill with water.

The strip builders of the RAAF’s Airfield Construction Unit could only fix these with loose tramped earth and sand and hope for the best.

Unfortunately, wheels coming across one of these wet, loose-filled craters sank and bogged and over went the aeroplane.

Of course, with those of us still in the air running short on fuel, and the strip being only wide enough for one at a time, wreckages had to be unceremoniously bulldozed out of the way. 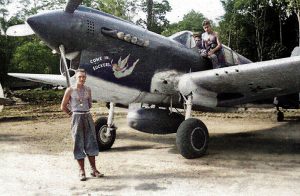 As Billie and I circled, covering the others as they landed, watching, and noting that those who did land right way up had to get some sort of help off the strip. We made plans as to how we would attempt to stay right way up, especially as an audience had gathered to watch the excitement.

By this time the strip looked like a muddy construction site, with deep wheel marks from those who had landed and from the tractors and bulldozers that had gone to their rescue.

I reckoned one of our standard turning approaches, tail high, ‘see a little of where you were going’ wheeler landings might be a bit risky so harked back to early training days and what were called precautionary landings.

The idea was to get the speed right back with everything hanging out—lots of drag with full flap, gills, wheels, open canopy, low and slow in a nose high attitude, with a fair bit of power. 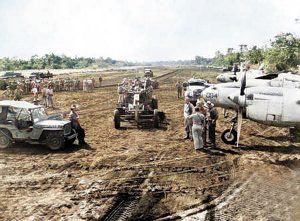 A Gallion grader moves to repair the airstrip

In that attitude and with power the prop is taking a bit of the aircraft’s weight, and giving extra airflow over the wing centre section and control surfaces, and the aircraft is more or less in tail down landing angle anyhow, while on approach.

I felt uncomfortable because I could not see a thing straight ahead with that bloody great nose up high in the air, but I could see some trees on either side, so kept going. I felt the wheels, all three of them make contact, and straightway poured lots of power into the poor old girl, with the stick hard back in my belly, to give elevator help in keeping the tail down.

My faithful bird sloshed along for a short distance, but the part-buried wheels soon prevented us going any further. The tractors came to get us out of the way, while Billie had his successful turn at landing.

My good mate, Jim Harvey, was one of the unlucky ones to turn wrong side up, and a little of his blood was spilt when he bumped his head. Your head is pretty close to the ground in an upside down Kittyhawk.

But for his troubles he was entitled to an American award—a Purple Heart. This medal was awarded to any serviceman who spilt blood on the field of battle.’

In recent years Tadji has become an important site for the recovery of aircraft wrecks some of which have been rebuilt up to flying standards.

The frame of the Gallion grader in the picture was still near Pro village when I last saw it in 1989. The International Diesel engine from it was used by Catholic lay missionary Peter Hughes to run the main bench of the St Anna sawmill in 1951.

The engine caused him much trouble as he had to start it with a tiny petrol engine attached to the side and then switch over to diesel.

He had a nickname for it. ‘Satan.’

Peter was killed tragically some years later when a piece of timber came off the bench striking him in the neck.

He survived for six hours with Dr Judy Fitt of Raihu Hospital looking after him but, just as we were putting him in to a Gibbs Sepik Norseman aircraft to go to Wewak, he passed away. The small community was in deep sorrow for a very long time.

His wife Dorothy and four lovely young children accompanied his body to Wewak Hospital and continued on to Geelong, Victoria, never returning to Aitape.

Peter Hughes was an amazing builder, a gifted mechanic and dedicated missionary.