Australia has given Papua New Guinea more than 100,000 records of plant and animal specimens collected since the1950s in what’s been described as a “really rich” source of data. The gift from the Canberra-based Australian National Herbarium will help the PNG Government 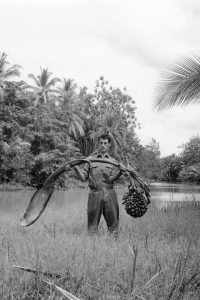 manage conservation and tourism, especially along the popular Kokoda Track. Australian researchers have been fascinated by the flora and fauna of New Guinea since the middle of last century but until recently most of their work was recorded on handwritten or typed notes taped to the specimen and kept in Canberra.  Today, the herbarium has started digitising its PNG collection adding thousands of records to its digital database. The curator Brendan Lepschi, quoted in the Sydney Morning Herald, says the aim in digitising the collection is to make it available for conservation agencies. “It’s a really rich source of data. It’s invaluable.  But you can’t recreate it, and you can’t go recollect this stuff, a lot of it is historical” he said. To date, Australia’s gift to PNG includes 11,778 insect records, 13,269 animal records (amphibians, reptiles, mammals, birds) and 79,774 plants. Lepschi says it’s information the PNG Conservation and Environment Protection Authority is pleased to receive.  “The authority wants to protect the region’s biodiversity as it faces increasing foot traffic particularly in popular tourist areas such as the Kokoda Track and the Owen Stanley Range”  says Mr Lepschi.