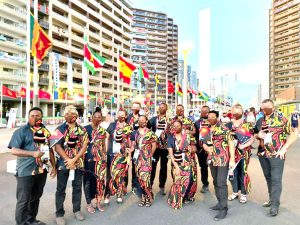 Members of the PNG Olympic Team

The Olympic Games are the epitome of sporting competitions. They bring together the world, through love of sport. The Olympic motto of ‘Faster, Higher & Stronger’ captures the determination of athletes from around the world as they strive to achieve their dreams in front of a global audience. Ever since their first Olympics in 1976, Papua New Guinean athletes have joined their counterparts in pursuit of Olympic glory, and on its way to the 2000 Sydney Olympic Games, PNG was fortunate to have been part of the Olympic Torch Relay, which visited Papua New Guinea in May 2000.

At those first games in Montreal, six male athletes competed in three sports—boxing, athletics and shooting. But, at the recent Tokyo Olympics in 2021, Papua 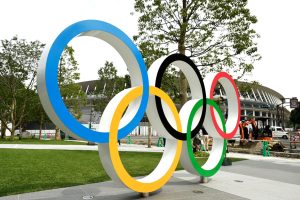 The Olympic Rings at Tokyo

New Guinea was represented by four men and four women in the sports of weight lifting (Dika Toua & Morea Baru), boxing (John Ume), swimming (Judith Meauri & Ryan Maskelyn), athletics (Rellie Kaputin) and sailing (Rose-Lee & Teariki Numa). One of the superior performances was by second-time Olympian, Judith Meauri, who competed in the 50-metre freestyle event with over eighty swimmers taking part over ten heats. Her swim of 27.56 seconds beat the time she set in the 2012 London Olympics of 27.84, and she won heat four in the event.

Speaking after the race, Meauri said she was very happy with the race and that she was excited to compete, but felt she had faced the race calmly and achieved everything she had set out to do. 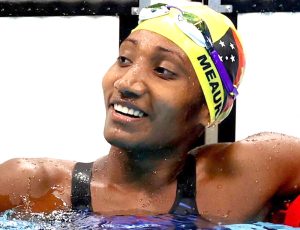 ‘This was the best race I have ever swum in an actual meet and I am happy with the time. This is only the second competition I’ve competed in, since the start of the pandemic.’

The 50-metre freestyle is the most competed event on the swimming program, as over 150 athletes swam in the men’s and women’s events.

PNG Chef de Mission, Tamzin Wardley, stated that every country competing at the Olympics is invited to send two swimmers to the Games, and most swim in this event, making it possibly the most global event at the Olympics. ‘Sitting in the stands, cheering Judith on, we were literally surrounded by the world.’

The fastest time for the event went to seven-medal winner, Australian Emma 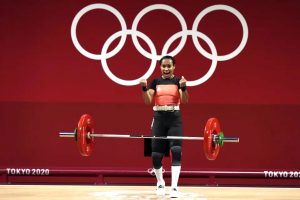 Dika Toua at Tokyo, the first woman to compete in weight lifting at the 2000 Games

McKeon, who set an Olympic Record of 24.02 seconds in the second-last heat, and went on to win the Gold Medal with another record of 23.81 seconds.

Although yet to win an Olympic medal, Papua New Guinean Olympians have shown that the nation is capable of competing at the highest level. 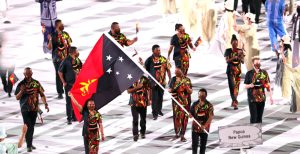 The Opening Ceremony at the Tokyo Olympics, 23 July 2021