In 1953 I started my apprenticeship as a fitter, at the University of NSW, School of Metallurgy. Here I met Jimmy Monteith, who had lived and worked on the Bulolo Gold Fields from the 1930s until the war broke out. His stories fascinated me so, when the government advertised in January 1961 for people to go to Rabaul in the Territory of Papua and New Guinea (TPNG) to be trained as teachers, I couldn’t resist—and in mid-May at 10.00 pm on a Thursday night, I found myself going on my first plane ride, starting a new chapter in my life.

A week of orientation began on Monday, 15 May. Now we learnt what we had let ourselves in for and what was expected of us—until now nothing had been explained about what we were to learn, how long it would take and what would happen at the end of the course. This may seem strange to some, but all sixty of us were in the same boat and had set out on a life’s adventure without much detail. We were told that we were on the second ‘E’ course and that the first sixty recruits had left Rabaul a week before we had arrived, and they were now taking up their schools in all the fifteen districts of TPNG.

Orientation week included visits to Pila Pila, Nordup and Matupit Primary T Schools. There were lectures on survival in the tropics and what we were allowed to do and what not to do, if we wished to stay in TPNG. We were allotted to our lecture groups and issued with our textbooks. We learnt that we would study fifteen subjects and cover most of the standard NSW Teachers College course of two years in six months.

A week later lectures began in earnest and subjects included English, Maths, History, Music, School Administration, Infant Method and Education Principles. We were also in for a shock as each lecturer gave us assignments—this meant we were busy day and night trying to complete them all. After several months we all jacked up and said that it was impossible to complete all the work properly in the time available. We received a reprieve on some deadlines. All this work meant we didn’t have much spare time for rest and relaxation.

The college was in the grounds of the Malaguna Technical College and consisted of an office block, two lecture rooms, a mess hall, and eight dormitories set four each side of a common access path. We had six dormitories, the seventh was for the local technical college students and one was a recreation building. Each person had a bed, a small table and chair and a wardrobe. Our spaces were divided by partitions and a curtain instead of a door provided some privacy. The toilets and showers were in another block behind the dormitories.

The grounds also had a large sports oval and a hall where movies were shown for the technical students and us. We paid two shillings each week for the hire cost so the locals could see them for free.

The Three Stooges was the favourite of the native audience. Our salary during our time in the college was £858 per annum rising to £1,241 on graduation. If I remember correctly, we paid £7 a week for our mess and laundry.

Nine weeks into the course we were to have our first attempt at teaching. My school was to be Raburua Primary T School. However, on the Saturday afternoon before we started, a riot broke out in the Rabaul Markets. I had been snorkelling at Nordup that afternoon with a chap from the Methodist Mission across the road from the college; on our return we found all hell had broken loose, with mobs of natives racing up and down the road near the college, throwing rocks and armed with all sorts of weapons. 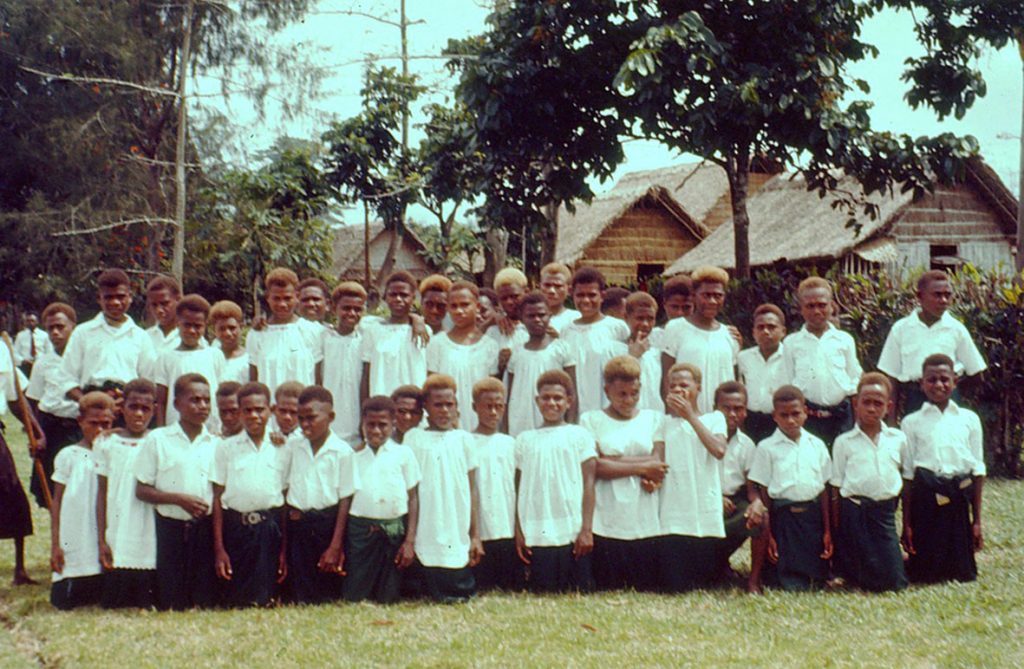 It seemed that a man from the Sepik District had assaulted a Tolai woman in the markets that morning and the local Tolais wanted revenge. They demanded that, either all Sepiks be removed from New Britain, or they would blow up the Shell fuel storage depot on the harbour foreshore. Several people were killed in the melee including one from the area where Raburua Primary T was located. It was a week before the disturbance settled. No Europeans were threatened; in fact, if we walked near a warring mob, they would stop and let us pass before resuming the fight.

Because of the death, teaching practice was delayed until the next Wednesday, when things had settled down a bit. During that first week, we had about twelve pupils, instead of the thirty to a class that was normal. The second week saw full attendance resume and the week ended with the villagers putting on a feast of thank you. I don’t think one could have had a better introduction to what we could expect in some of the more primitive areas after our graduation.

It was a nerve-wracking experience coming back from demonstration lessons at Pila Pila School in the local bus. While the college had two, near new, twelve-seater Commer buses, the local buses where quite old and in poor condition. The return journey involved coming down the very steep Tunnel Hill road which ran about two kilometres down to the harbour.

The driver used to engage low gear for the descent but, from the way the gearstick shuddered, I expected it to jump out of gear at any second and for us to go careering down the hill into the harbour.

My final practice school was called Talwat and it was located on the water’s edge at the foot of the South Daughter Volcano at the entrance to Simpson Harbour. The road to Talwat was the roughest we had experienced and the ride there was torture each morning and night with six of us crammed into the back of a covered, short-wheelbase Land Rover. However, the children were fun to teach and we had a very successful two weeks after which the villagers put on a sing-sing to thank us.

Our last three weeks in Rabaul were full on, with revision followed by a week of examinations. We had fifteen in all, three each day. It was an exhausting experience. One examination that some of us found quite hard was to play ‘Good King Wenceslas’ on a recorder, which we had all been asked to buy and learn to play. Have you ever heard the wailing of sixty recorders each afternoon trying to play this tune in ‘F flat’? The exams were followed by a week of shopping and packing for our postings, which were announced mid-week. I was going to the Madang District, one of the two I had nominated.

Monday, 13 November was reserved for our graduation ceremony and dinner, to which we had invited all the local Rabaul dignitaries and Sir Donald Cleland, the Administrator of TPNG. We entertained them with our choir singing which we had been practising from day one. We sang ‘Cielito Lindo’, ‘Going Home’ and ‘Gaudeamus Igitur’. We had omitted to invite the parliamentary member for New Britain for some reason or other, but he turned up with his wife on the night, and there was much rushing around by the student committee to fit them in at the last minute. This was a fun night and the caterer to the college turned on a good feed, which had not always been the case during our six months in residence.

Early Tuesday morning found us at the airport waiting our departure for pastures new and a new way of life. Our DC3 to Madang was a cargo plane and we had to sit along either side of the plane with our cargo stacked down the centre of the cabin. It was an experience in itself, as the door between us and our pilots was open, and we had a running commentary of our flight, as we were overloaded and running late.