The time has come to say ’au revoir’ to our President, Andrea Williams who, by the terms of PNGAA’s Constitution, is required to step down from the position she has so competently occupied these past five and a half years. 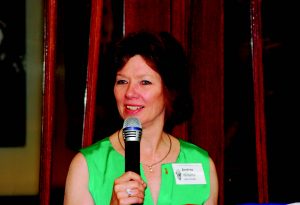 While retaining her position as the Editor of Una Voce, she accepted the role of acting President following the resignation of Dennis Doyle in December 2011 and at the biennial Management Committee elections of 2013 was confirmed in that position when, at the same time, she stood down as Editor after serving in that position for nine years.  In farewelling Andrea, we are not really saying ‘Goodbye’ as Andrea will continue on as an integral part of PNGAA’s Management Team as a member of the Management Committee.

Andrea’s legacy as President of the Papua New Guinea Association of Australia will long be remembered – each year has seen an exciting new development or initiative which has cumulatively strengthened the role of the Association in its efforts to be a catalyst in growing the relationship between Australia and Papua New Guinea in these changing times.   Faced with an ageing and declining membership she proceeded to gradually change the dynamics of the Association in order to make it more relevant to 21st century Australia and Papua New Guinea.  In this respect, the journey is still on-going as we saw the switch, in June 2015, to a full colour, A4, revamped, Una Voce Journal.  Then came the introduction and increasing use of ‘Facebook’ social media to facilitate daily interaction amongst members, combined with a continuing, but still incomplete, development of a more modern and relevant PNGAA website.

Her administrative nous, leadership and organising abilities together with an innate ability to relate in a meaningful, respectful and knowledgeable manner to all levels of society both within Australia and PNG, stood her and the Association in good stead.  We saw early in her Presidency the role she played with others in the development of the Rabaul and Montevideo Maru Society, culminating, in July 2012, in the dedication of that wonderful Memorial to those lost on the Montevideo Maru which now proudly stands in the grounds of the Australian War Memorial, Canberra. The centenary of ANZAC saw the bold and successful venture of the 2014 PNGAA Symposium which was linked to the commemoration of Australia’s first battle of WW1, the battle of Bita Paka.

Other highlights of her Presidency include:

ü  The revival, reinvigoration and promotion of PNGAA’s concept for an Australian Community Centre for Pacific Nations (ACCPN) as a means of utilising and preserving the heritage values of the old ASOPA site on Middle Head.

ü  The support and fostering of Kiap Recognition activities which led to the production of the DVD ‘Kiap: The Stories Behind the Medal’ and latterly, the development of a proposal for ‘The PNG Kiap Scholarship’ scheme to promote mutual understanding between Australia and Papua New Guinea.

ü  The integration of the Rabaul and Montevideo Maru Society with the PNGAA following the  former’s winding-up in 2013.

In summation, PNGAA has indeed been fortunate to have experienced the inspired and dedicated leadership of Andrea Williams in the positions she has held to date and the Association owes her a massive debt.

Andrea, we salute you!

UV: With thanks to Ross Johnson and Paul Munro for their words.