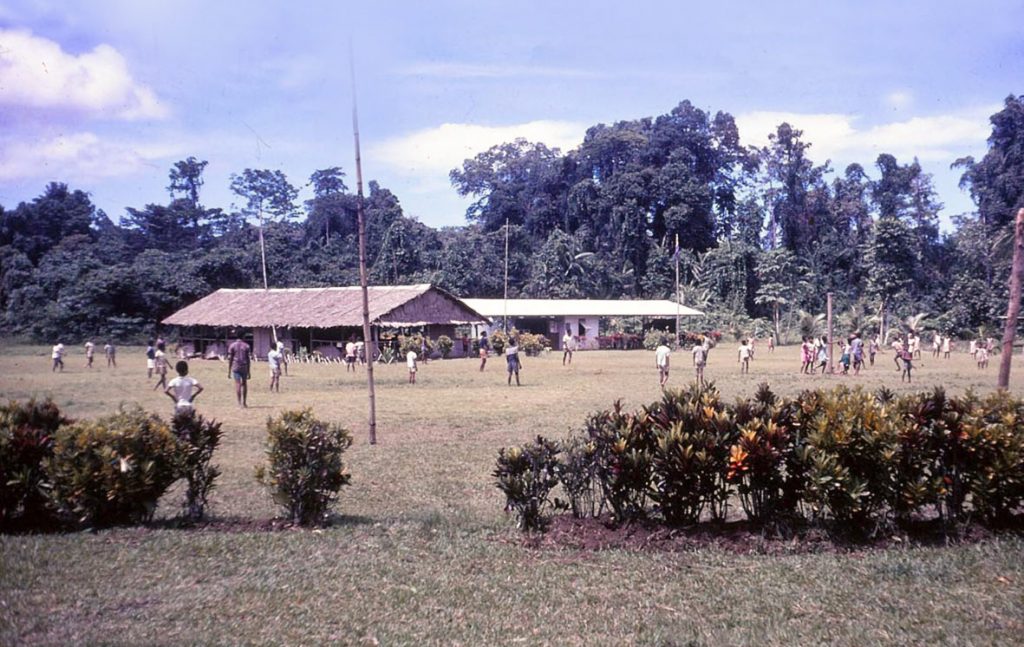 Acting as the local vet was another responsibility I had at Murua. With the support of Joy and her nursing experience, we managed to keep our donkeys, horses, cattle and pigs in good health.

The pigs were in fairly poor nick when we arrived. Their staple diet was pumpkins, of which there was no shortage on the station, supplemented with a little sweet potato that was bought from the locals from time to time, but clearly this didn’t provide sufficient nutrition. We introduced some rice to their diet as well as fencing a few small paddocks so that the pigs had access to Peuraria javanica, the leguminous cover crop that grew all over the station and was used mainly to suppress weed growth in the rubber plantings. 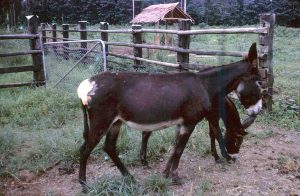 Skin infections thrived in the wet environment. At one point a donkey had a badly infected sore the size of a dinner plate on its rump. With nothing else available to us we applied liberal amounts of an antibiotic cream that we found in the office. We then put a dressing over it—not expecting it to stay on for very long at all—and hoped for the best. Amazingly, the injured donkey proved to be far more co-operative than usual over the next few days and allowed us to catch her and change the dressing which, just as surprisingly, stayed on. Within a week she was almost totally healed.

Maintenance tasks on the station extended beyond the buildings and livestock. A range of machinery always seemed to be requiring some attention. As was the case with house repairs, help from Kerema was normally a fairly forlorn hope. Every now and again a Transport Department mechanic would find their way up the river, but mostly I had to apply my basic bush mechanic skills to the problem—and mostly I managed to get things working again. The LandCruiser, tractor, motorbike and water pump at the river all responded to my attention at various times. Success with outboard motors was, however, more elusive. 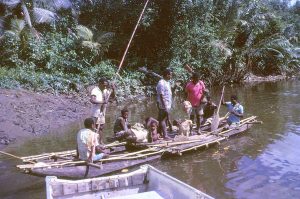 While Murua had a good airstrip, there were no scheduled regular flights. Planes would call in on a needs basis or if the Kerema airstrip was closed, usually due to inclement weather. We therefore had to ensure that the strip was kept well maintained and that regular reports on its condition were provided to the Department of Civil Aviation (DCA). Every now and then the strip would be flooded and we had to close it and put cone-shaped markers in a cross to warn any approaching aircraft that they could not land. Keeping the markers in position was an interesting challenge in rising floodwaters; they simply floated away. On my first attempt at retrieving errant markers I wondered why the local staff just looked on from higher ground; on questioning them they alerted me to the fact that it was not uncommon in floods for crocodiles to float in from the nearby swamps!

On one occasion we had to accommodate a plane load of people overnight when the Kerema airstrip was closed. We had been at Murua for barely a month so were not all that well-equipped to cater for unexpected visitors when the plane dropped in late in the afternoon. 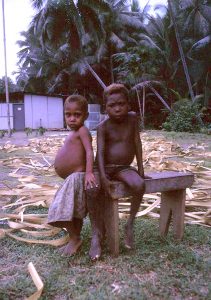 I had been on the plane too, returning from a day trip to Ihu, so bypassing ‘town’ meant that I had not been able to stock up on the basics on my way home. Shortly after we welcomed the pilot and a couple with two children into our house, we had another visitor – a missionary who had been lost in the jungle for a few days while walking out of Kuka Kuka country in the hills behind Murua.

While we were a bit light on for some of the comforts of life (beds, for example) we had plenty of floor space and some creative culinary skills on Joy’s part saw us all survive the night without incident and our visitors headed off on the plane the next morning.

We once hosted a visit by the Territory Administrator and the Executive Council and entourage. All went fairly smoothly until near the end of the event when some of the visiting party, sitting on the tray on the back of the station Toyota LandCruiser (their only motorised alternative was the tractor-drawn trailer), were taken in the wrong direction by the driver. They were reunited with the rest of the group a short while later—after all, there wasn’t a lot of scope to get lost at Murua if you stuck to the very limited road network—but the Gulf District Commissioner (DC) accompanying the group was not particularly amused! 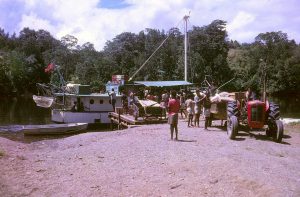 Later, we geared up for a visit by the ‘lapun [old] Development Bank Board of Directors’ (as seen through my twenty-four-year old eyes and recorded in my diary of the time). Pivotal to the planned visit was a trip up the Murua River in our huge dugout canoe. The river was tidal so I don’t recall what we were to have done if the tide was out. Near the rubber factory of one of the settlers, steps were cut into the bank so that the visitors could have easier access to see first-hand how the bank’s funds were being used; interesting to think how many directors we may have lost had we had a good downpour of rain, an almost daily occurrence in the Gulf.

Our carpenters made seats for the back of both the LandCruiser and the trailer to be towed by the tractor; no such refinements for the Administrator and his entourage a couple of months earlier! Come the day before the much-anticipated visit and, surprise, surprise, we had the mother of all downpours and the station was flooded. The visitors were planning on flying in, but the airstrip remained waterlogged and we had no option but to close it and advise that it would be some days before it could be reopened. 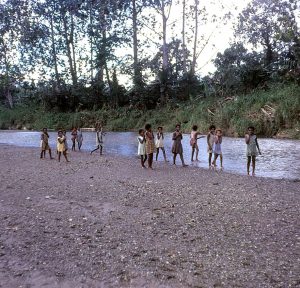 Undaunted, arrangements were made for the visitors to come by boat from Kerema. We just had to make sure that whatever water craft were used were not stranded on the mud flats at Kerema at low tide. The visitors would also have to come prepared to wade out to their transport, as we always did, unless we could arrange to tie up at the wharf a bit further down the harbour.

What we didn’t know until I overheard a conversation, while awaiting my turn on the radio ‘sked’ (schedule) on the morning of the planned visit, was that the people in Moresby had been told that the Malalaua airstrip, which was to be the first leg of their visit to the Gulf that day, had been closed. They therefore decided to cancel the whole trip. In actual fact, Malalaua was not closed at all and the ADC (Assistant District Commissioner) there was not at all happy as he had about 300 people waiting to meet the Development Bank delegation.

At least he was told about the cancelled trip, albeit rather late in the piece, whereas the only reason we at Murua knew about it at all was the conversation I overheard on the radio.

Too bad about the lunch that Joy had gone to a lot of trouble to prepare for the visitors. Getting food together for visitors always presented a bit of a challenge at Murua. Our main supplies came in on the monthly ‘K’ boat from Moresby, so you had to plan well ahead when you sent your order in to ‘Steamies’. In between times we had to rely on the small store in Kerema; however, fresh supplies arriving there were swooped on by those living nearby and by the time we got into town the cupboard was invariably fairly bare. 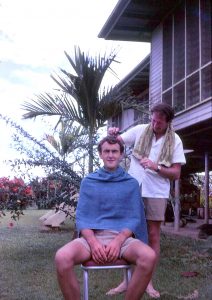 While I learned a lot at Murua, and hopefully made a useful contribution, from very early in our time there I started casting the net around for a job at a place where Joy and I could both work. In early July a replacement for me arrived at Murua. I had no idea what DASF had in mind for me although a move to Ihu was rumoured. It was to be another seven weeks before I received any formal notification from DASF—I was indeed to transfer to Ihu so packing started. Just days later, I was offered a role as a Rural Officer with the Development Bank, based in Port Moresby, so I immediately applied for a secondment from DASF.

I heard nothing of my application for some time so went ahead and made arrangements to move ourselves to Port Moresby. Late in the day before our departure from Murua, a telegram was received from DASF Headquarters advising that my secondment had not yet been finalised and that I was not to leave my posting ‘under any circumstances’.

I had already handed over to my replacement, our cargo had just been loaded onto the boat bound for Moresby and I was keen to start my new role. The HQ directive was therefore duly ignored and so began a wonderfully rewarding seven years with the PNG Development Bank that opened up opportunities for us both that certainly would not have presented themselves at Murua. This new direction will be the subject of the next instalment of my story.