The morning of 12 February 1970 saw Joy and me winging our way from Brisbane to Port Moresby, a three-hour trip that had us scheduled to touch down at midday. We arrived pretty much on time, notwithstanding three attempts at landing because of the cyclonic winds that almost forced the pilot to retreat to Cairns.

At this stage, all we knew was that DASF was transferring me to the Gulf District—but where? The first bit of information I gleaned from my visit to HQ at Konedobu was that we were going to Murua. 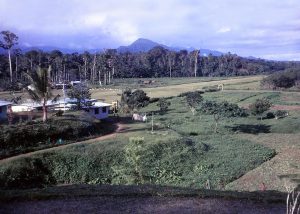 The next day we were at the Steamships store in town opening an account so that we could get goods sent on the ‘K’ boat that went to Murua once a month as well as buying a few basics to keep us going in the meantime. We could, after all, stock up more fully at Kerema … couldn’t we? We were soon to find the answer … if you were not in Kerema when the boat arrived from Moresby you missed out!

We found there was a flight going to Murua that afternoon so at 4.40 we were on our way, arriving about an hour later. There was no time to see too much of the house on that first day—just enough to find that there was a lot of cleaning to do and that even the most basic of furniture was missing. And so ended Friday the 13th of February 1970. 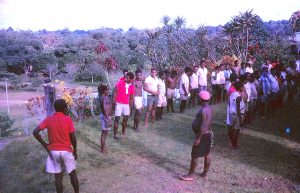 Farmer trainees being allocated tasks for the day

Murua was an agricultural training station some eight km as the crow flies north east of Kerema, the Gulf District Headquarters. Across the Murua River from the station was a small land settlement scheme of about forty blocks that produced rubber. There was no road access from the coast and no regular plane service so it was generally a boat trip across Kerema Bay and up one of the many inlets along that coast. This trip took about three-quarters of an hour by dinghy but could take twice that time in the big canoe that was needed to carry drums of fuel and other large items—44-gallon drums of fuel fitted across the canoe.

The normal arrival point was the wharf at Matupe from where it was about a five-minute drive on a well-formed road that had been built up through the low-lying tropical jungle.

Development of Murua station started in 1959 when DASF personnel tackled the virgin forest with nothing more than axes and machetes. Later, a chain saw speeded up progress somewhat. Nevertheless, it was hot, sweaty, painstaking work in an environment of consistently high humidity.

Eleven years on, significant progress had been made: a good, solid airstrip running up the middle of the station; housing for staff across a range of departments; dormitory-style accommodation and kitchen/dining facilities for the farmer trainees; generator-powered electricity; rubber buying and storage facilities; a small store run by a club that had been set up by local staff to cater for the basic needs of people on the station as well as those living on the nearby rubber settlement blocks; and a small office. 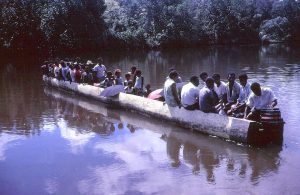 A couple of cleared and fenced paddocks were home to three donkeys, two horses and a few cattle. A set of yards had been built in one of the paddocks. Across the river, next to the rubber blocks, was a primary school that catered for the children of both block owners and station workers.

Staff consisted of the DASF office clerk, three agricultural assistants, two carpenters, a tractor driver, car (Toyota LandCruiser) driver, the power boy (who was responsible for starting up the station generator each morning and evening and looking after its general maintenance) and a policeman. 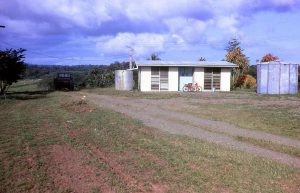 A variety of crops had been planted. These were of both an experimental nature, to help determine what may be worthwhile pursuing on a commercial basis by the local landholders, as well as providing a training ground for farmer trainees who spent about twelve months on the station learning the different aspects of crop husbandry, particularly rubber. In addition to fairly substantial plantings of rubber of varying ages, there was Robusta coffee, nutmeg, vanilla, an oil palm plot and quite a few custard apple trees scattered around the place. 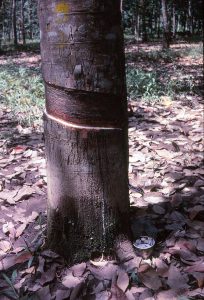 Tapped rubber tree—note spout and cup to catch the latex

A considerable area of the blocks had already been planted to rubber trees and much of it was already in production. The settlers ‘tapped’ the latex each morning, allowing the white sap to flow into aluminium cups attached to the tree. Later, the latex was collected and taken to the small processing factory that each settler had on their block where it was put in trays with formic acid to coagulate it. The settlers processed their rubber to the Ribbed Smoked Sheet (RSS) stage, the coagulated latex being rolled into fairly thin sheets and smoked before being brought across to the station where DASF staff graded, weighed and bought it before packing it into 100 lb bales, which were then shipped on the monthly ‘K’ boat to Steamships in Moresby.

My work as a Rural Development Officer (RDO) at Murua was pretty varied. In the absence of any other government departments being represented by an expatriate on the station, in addition to looking after the DASF staff I had to provide day-to-day support to the local officers working for Public Works, Education, Transport, Police and the Electricity Commission. I also had responsibility for the rural development work of a small team of DASF people stationed at Ihu, a little way up the Vailala River about fifty km around the coast west of Kerema, and made regular trips there by plane from Kerema. 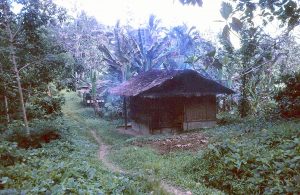 A large part of my time was spent attending to the needs of the settlers on the nearby rubber blocks. Apart from assisting them with expansion of their plantings using seedlings from our rubber nursery, we had to ensure that all aspects of maintenance were attended to, that tapping of the older trees was done properly and consistently and that curing and smoking of the latex was done properly.

My exposure to rural credit in PNG started when I was posted to Murua. Development of the smallholder rubber blocks from virgin bush through to production would not have been possible without funding from the PNG Development Bank and, as was the case throughout the country, the effective disbursement of funds and subsequent repayment of loans relied very heavily on the local didiman, acting as the bank’s agent. 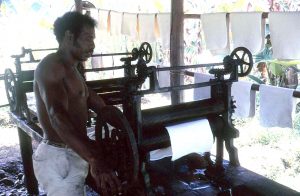 Under the loans, settlers were paid a living allowance until their rubber production could support them. Drawing on the loan funds, we also organised the purchase of building materials for dwellings, rubber factories and smoke houses as well as tools and rubber processing equipment. The local officers’ Staff Club, under the guidance of the didiman in charge at the time, had set up a small store on the station to service the basic needs of people living on and around it. Tools and equipment such as tapping knives, latex cups, coagulation trays, formic acid and rubber rollers as well as cover crop seed were ordered through the club from Burns Philp and Steamships in Port Moresby and shipped out on the monthly ‘K’ boat. Seedlings from the station rubber nursery were supplied to the settlers as they developed their blocks. 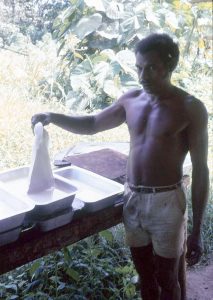 Regular individual Block Reports were completed for the bank, recording progress against the development plan, production details, income and expenditure. Budgets were reviewed regularly and amended as necessary with the approval of the bank. Apart from disbursing loan funds, DASF was also responsible for ensuring lease rental payments were up to date, collecting loan repayments and communicating to settlers if any action was being considered by the bank. I was also the paymaster for all government employees on the station and at the school across the river. Money for the pays as well as buying the rubber was advanced to us by Treasury in Kerema and brought up to Murua in a calico bag … no, a locked calico bag! That was the only security on the trip up the river but it seemed to work all right! Once at Murua we had a proper safe in our office.

From time to time it was necessary to mediate in disputes between settlers, including when they sometimes came to blows. While there was a local policeman on the station, he was rarely the first point of call in these matters; realistically, a lone Chimbu policeman mediating between two groups of people from the Gulf was hardly likely to work. 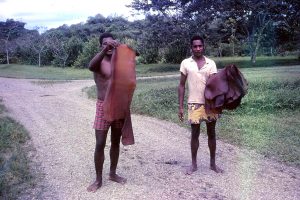 Settlers with rubber sheets for sale at the DASF station

Other tasks included arranging maintenance on all station housing, always a challenge given that PWD in Kerema rarely seemed to have much in the way of materials. The months it took to get our own house in a reasonably liveable condition was a good indication of the challenges faced—out of sight, out of mind seemed to be very much the way things were here. We suspected very strongly that a leaking roof was causing our electricity to short out but were having great difficulty getting anyone to share our view or even to look at it; eventually someone did come up and we were vindicated when they removed a sheet of Masonite from the lounge room ceiling, and the fellow was absolutely drenched by the water that had been trapped up there—with electric wiring sitting in it. 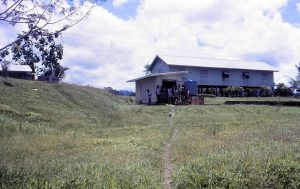 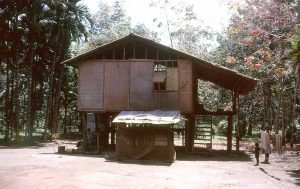 A fairly substantial settler’s house on the rubber resettlement scheme 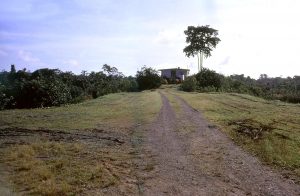 Our header tank, the only source of running water for the house, only held water for a very short time. Again, PWD couldn’t help so we resorted to trying to plug the holes with whatever we could lay our hands on and, eventually, the problem seemed to be largely solved; at least we managed to slow the loss of water so that we could have a proper shower without one of us having to man the hand pump under the house to keep water supplied to the header tank. 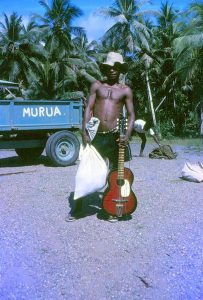 Getting gas to flow through to the kitchen stove was a more intractable problem, but the solution lay hidden under a pile of rubbish. An old wood-burning stove that had long since passed its use-by date in one of the local officer’s houses was found in one of the station sheds so we put the pieces together, did a few running repairs and set it up on the concrete pad under our high-set house. It served the purpose reasonably well for the remainder of our time at Murua. The one thing we had to be careful of was to finish our cooking well before darkness fell, before the hordes of huge mosquitoes that flourished in the tropical conditions carried us off.