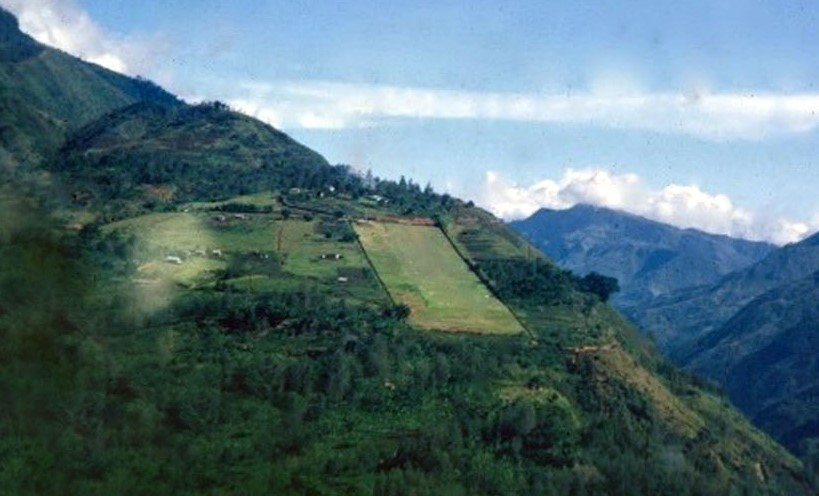 The roar of the engine was intense. I was escorting a patient in pain from Kundiawa District Hospital in Chimbu to Goroka General Hospital, and the pilot was trying to gain height to cross the range. The clouds were closing in and we were tilting from side to side to see how high we were from the ground. We passed small villages, seemingly at eye level. We made it over—just!

Omkalai airstrip (servicing Gumine) just south of Kundiawa was the most impressive strip to land on—a 13º slope on the side of a mountain where the pilot had to throw his plane up the strip, almost stall, then rev the engine up at the top onto a flat patch to stop the plane running backwards down the strip. Taking off again was even more impressive: a quick acceleration down the strip, airborne, then a rapid, steep left turn immediately after take-off down into the Wahgi valley. Stomach churning and exhilarating.

These were just a few of the many trips I made in my year of 1969 and many were scary. There were frequent tales of crashed light aircraft, especially those flying up valleys where they just ran out of air. I survived due to the expertise of our young Aussie Qantas pilots.

What was I doing here? I was twenty-two-years old, a fourth-year medical student from Guy’s Hospital in London, who thought a year volunteering with Voluntary Service Overseas was a good thing to do.

The Dean frowned, said ‘Yes’, but added ‘… do not encourage the others!’ So, on Christmas Day, 1968, I was off to Australia then Papua New Guinea. 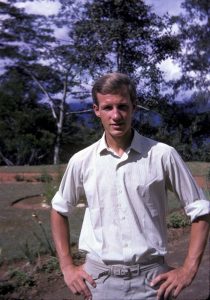 I was seconded to Kundiawa District Hospital for the first six months, working for Dr Jay Morton and the forceful Dr Dorothy Millar, daughter of the formidable Andre Millar, who helped found the Lae Botanic Gardens. We also had the great West Papuan, Dr Adolf Saweri, who had just finished working on kuru in the Eastern Highlands. There was a good bunch of Australian sisters, especially Joyce—who taught me so much about obstetrics. The dokta bois and dokta meris were excellent. They had in-house training and were devoted to their work.

We provided basic care treating the diseases of the poor village communities—bronchopneumonia, gastroenteritis and malnutrition, with care for the tuberculosis and leprosy patients. Heart disease was unknown and people with cancers and liver failure took their chances with customary treatment.

It was an eye opener for a lad from England, but I soon adapted. I was given a house next to the hospital with an interesting collection of nocturnal cockroaches. I volunteered to be on call every night except for the nights when I wanted a few beers. It was not arduous since admissions virtually ceased at sunset, as people waited for sunrise to set off to the haus sik.

Some ampicillin was available, but chloram-phenicol was amazingly effective for serious illness. It was banned in most countries because of 1:10,000 cases of bone marrow failure, but we used it very occasionally with startlingly good results and many lives saved. There were a few broken bones, usually from falling out of a ute.

Once or twice we had battleground injuries—normally an arrow into a leg or arm. In those days disagreements were staged affairs with one group arraigned on one side of the valley, and an opposing group across on the other. They would holler and shout insults across the valley and young bloods would rush forwards to fire an arrow or throw a spear. Most people could see them coming and dodge. After a while people would tire and go home —duty done. If someone was struck by a spear or arrow they would come to haus sik to have them dug out.

My duties were consistent but not strenuous. Occasionally, I was called to give an anaesthetic to a patient with a broken arm or an abscess. Giving them an injection to put them to sleep was fine, but the open ether that I dribbled onto a gauze mask was troublesome. Soon I was feeling drowsy myself and had to be careful to modify the anaesthetic and not get too close to avoid my own total anaesthesia! 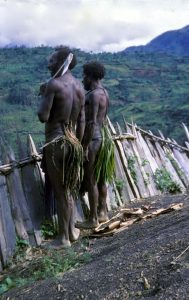 I loved going to the leprosy wards where there were ten or so chronic leprosy patients. They were usually there for severe ulceration of their numb feet. First, we had to cut off old, dead, hard skin to allow the wound to heal and then put the foot in plaster for it to heal over the next four weeks. The patients were always cheerful and friendly though we hardly had a word in common.

One of the scariest things for a mother was to sit with her child with croup in the steam room. Croup is a very unpleasant viral inflammation of the larynx in two- to three-year-olds, and the children often become quite distressed. Steam has an amazing effect on the airways and soothes the breathing. The gardener would light a fire under a 44-gallon drum until the water was boiling. The steam was led down a pipe into the steam room and the mothers would have to sit inside with their child in total darkness for twenty-four hours. They were very stoical.

Life was always interesting. I was sent up to Gembogl for two weeks to provide cover for the small hospital. I was in charge and everything rested on my decisions. However, my main memory was of the immense coldness at night. At over 7,000 ft the temperature plummeted at sunset, and I remember having a quick supper and being in bed by 7.30 pm to keep warm.

Another time I was sent up to Wabag to provide cover for the holiday of the ambulance man recruited from England. It was fascinating to see the skills that the government sought in order to run the health service. I hope the Wabag people put up with my inadequate presence. My main memory was flying up from Mt Hagen in a DC3, sitting on seats against the fuselage with luggage piled in the middle. We seemed to be flying at about 200-300 feet constantly heading uphill—a bit of a shock.

We had fun going on outings. There were deep caves north of Kundiawa with incredible stalactites and narrow passageways. The walks around Kundiawa and the mighty Wahgi River were always interesting to see, and we climbed up part of Mt Wilhelm. The market was entertaining with buxom young women showing off their furs and bracelets, and of course being topless with a pulpul (woven fur skirt). 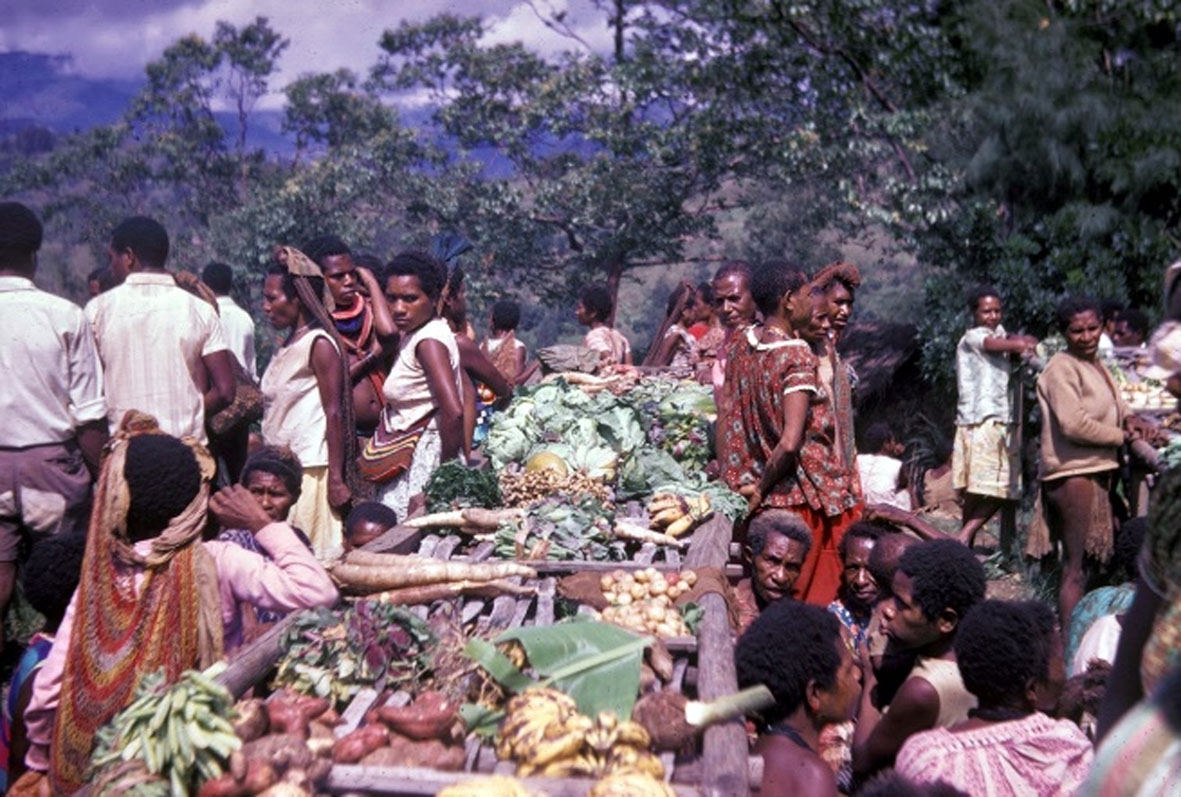 Always a wonderful array of vegetables at Kundiawa market

The women were extremely competent at maintaining their modesty with their pulpul flopping from side to side but always in place.

The men proudly wore their as gras (leaves covering their buttocks), newly cut before coming to town. Some had  a small bamboo tally that they wore like a necklace which showed a bamboo stick for each pig they owned. A few had bank balances that came down to the umbilicus: a truly great man!

As in many cultures, rows occurred over pigs, land and then women. The women worked in the gardens incredibly hard and often carried a large bilum (net bag) strung from their foreheads full of sweet potatoes, and another with firewood and maybe a third with an infant. Kundiawa was cool and wet and the barely-dressed women coped with the cold with bravery.

I did a couple of patrols, first to Bomai in the south of Chimbu, and then to the Jimi Valley in the Western Highlands with a researcher (another story next time).

For my second six months I was sent to the Angau Memorial Hospital in Lae. There were six Australian doctors and five Papua New Guinean junior doctors. I was allocated to work on the children’s ward. Life here was different. There was the bustle of a westernised town, comfortable quarters and very smartly dressed and attentive nurses. Dr Sutherland, the paediatrician, was kindly and a good teacher and we made a good pair.

After a year I returned to Guy’s Hospital for my final year and to qualify as a doctor. People often said to me that I must have seen a lot of diseases and learned a lot. More difficult to describe, however, was learning how a poor country was struggling to create an effective health service. I learnt about poverty, not just in money but in possessions and food. I was immensely impressed by the good mood of the people who lived in the villages and the struggle they had in improving their lives and the lives of their children.

I learned of simple strategies to treat the conditions that could be treated and not to worry about those which had no treatment due to resource limitation.

I cannot now, after fifty years, remember what I left behind or if anyone learnt from me. I like to think that by sharing their experience I helped people to make their lives better. My experience of working in PNG as a young medical student certainly enriched my life.