Compiled in 1964 by JK McCarthy, Director of Native Affairs, Konedobu, Papua, the following information records the establishment of government stations in New Guinea until the early 1960s. 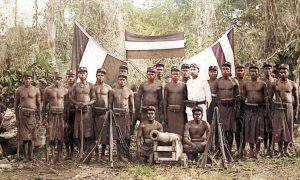 1890s: Herbertshohe established as main station in Bismarck Archipelago. The business and administrative centre moved to Stephansort in 1891. The colony was divided into Eastern (Herbertshohe) and Western (Friedrich-Wilhelmshafen) Court Districts. The headquarters was moved to Madang in 1895. The German Government took over from New Guinea Company in 1899, and transferred the capital to Herbertshohe (Kokopo). 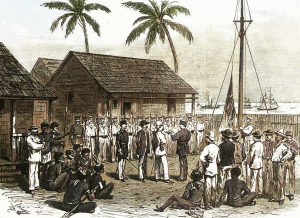 1900s: District of Nusa and station at Kavieng established, Finschhafen Station was re-established and Salamaua established as base for Huon Gulf Expedition. A police post was established at Toma along with stations at Namatanai, Kieta, Eitape and Bula. Police post established at Morobe and, in 1909, District Office transferred from Herbertshohe to Rabaul.

1910s: Central Government and Supreme Court transferred to Rabaul in 1910. Stations established at Manus, Angoram, Angrisshafen, Gasmata, Wewak and Lae, which had lapsed in 1914, was re-established.

1920s: Stations were established at Buka Passage, Buin, Marienberg and Ambunti. Districts of Rabaul, Talasea and Gasmata amalgamated with headquarters at Kokopo, Kavieng and Namatanai Districts were amalgamated. 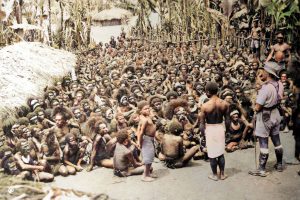 1930s: ADO stationed at goldfields area at Wau, and Marienberg Station moved to Angoram. Station established at Kainantu in 1932 and a permanent base camp established at Otibanda and advance post at Finintegu. Base camps were also established at Kundiawa, Goromei and Bena Bena, with new posts at Tungu and Wakunai. Lae became a Sub-District Office in 1937 and stations were later established at Maprik, Gormis (Mt Hagen), Mai Mai and Bogia, with a base camp at Yapunda (Sepik).

The transfer of New Guinea Headquarters from Rabaul to Lae was commencing at the time of the occupation of Rabaul by the Japanese.

1940s: Goroka Station replaced Bena Bena in 1946, Minj, which was a base camp only until 1948–49, Wabag was taken over from the army, Kaiapit and Finschhafen were re-established and Mumeng established. Stations were established at Lumi, Pomio, Yangoru, Dreikikir, Telefomin. Henganofi, Wantoat and Wapenamanda. 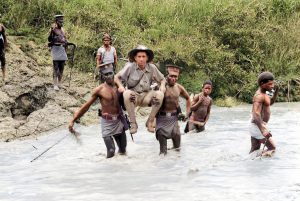 Patrol Officer Leigh Vial being carried by police across a river, 1939 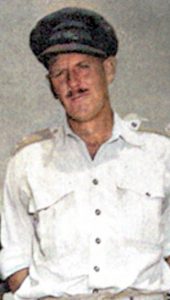 John Keith McCarthy, CBE (1905–76), became a patrol officer in the Territory of New Guinea in 1927 and, at the start of World War II, he was an Assistant District Officer at Talasea. He helped evacuate civilians from Rabaul after the Japanese attack, and commanded local coastwatchers and ANGAU scouts, becoming Military Resident Commissioner of Sarawak.
Following the war, he was appointed District Officer, before being promoted to District Commissioner of Madang in 1949, later holding the same role in Rabaul.
In 1951 he was appointed to the Legislative Council, and in 1955 he became Executive Officer of the Department of the Administrator, and was briefly Acting Administrator of Nauru in 1957. In 1960 he was appointed Director of Native Affairs and, following the 1964 elections, he became an official member of the new House of Assembly. He was awarded a CBE in the 1965 Queen’s Birthday Honours, and retired from the civil service in 1967, returning to Australia in 1971.