Arriving in Port Moresby in 1954 after three months at the Australian School of Pacific Administration (ASOPA), I began my career in the Department of Education of the Territory of Papua and New Guinea (TPNG). After a period in the headquarters of the Department during which the Director WC Groves resigned and, among other duties, I taught English to Papua New Guineans and expatriates in the public service, I was assigned a temporary posting, filling in for someone absent for three-months’ leave after 21 months’ service.

The posting was to Samarai, in the Milne Bay District, as a temporary Area Education Officer.

Samarai is an island one can walk around in about a half an hour. It had a long history as a copra and trading-centre, so it was quite an attractive post in which to spend time. Milne Bay had been a major war zone in World War II, and the district included the fabled Trobriand Islands of Malinowski fame, the Ferguson Islands, Misima, Dogura, the headquarters of the Anglican Mission, Kwato, where the Abel family had established a mission over two generations, and various other Catholic and Protestant outposts. It even had a nearby island with a small beach where some surfing was possible.

The three months were full of interest. It included my first acquaintance with Misima, a two-day boat trip from Samarai, and the furthest east of PNG’s islands. An emergency trip came immediately after a serious cyclone that neatly took away half its vegetation, including all the trees, leaving a clear demarcation line between that half and the other more intact, more populated half. The trip was to check that John Lee, who ran the Misima School and the school had survived. He had, and incidentally, looked after me, and provided a lesson in how to survive alone in a remote place. Sadly, in later years, he died in an aircraft that crashed into a mountain in the Milne Bay area.

The boat trip out and back was story-book tropics: The crew caught large fish with a line over the back of the Chinampa and later cleaned and grilled them for dinner. Few things could be better than an evening with the boat tied up to a coconut plantation’s small jetty, enticing smells from the copra oven, balmy tropical evening air, crew members quietly singing well-known islands songs accompanied by guitar music.

Later in that posting period I went around the Trobriand Islands, a place so much reported by anthropologist Malinowski that, with forewarning ahead from one of my former students of the Port Moresby classes, Lepani Wadeson, was notable for the warm welcome and generous islands hospitality. Pity I did not like yams much!

The Samarai time was most enjoyable. Nevertheless, the position was too senior for me to be a real posting. It was inevitable that I would be moved. I was. 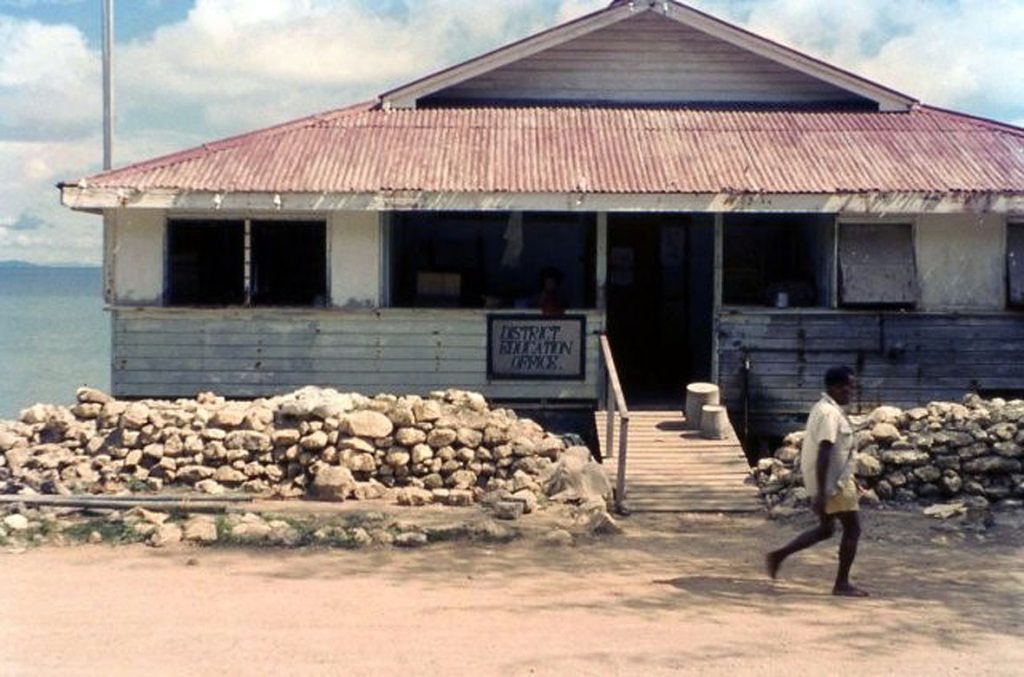 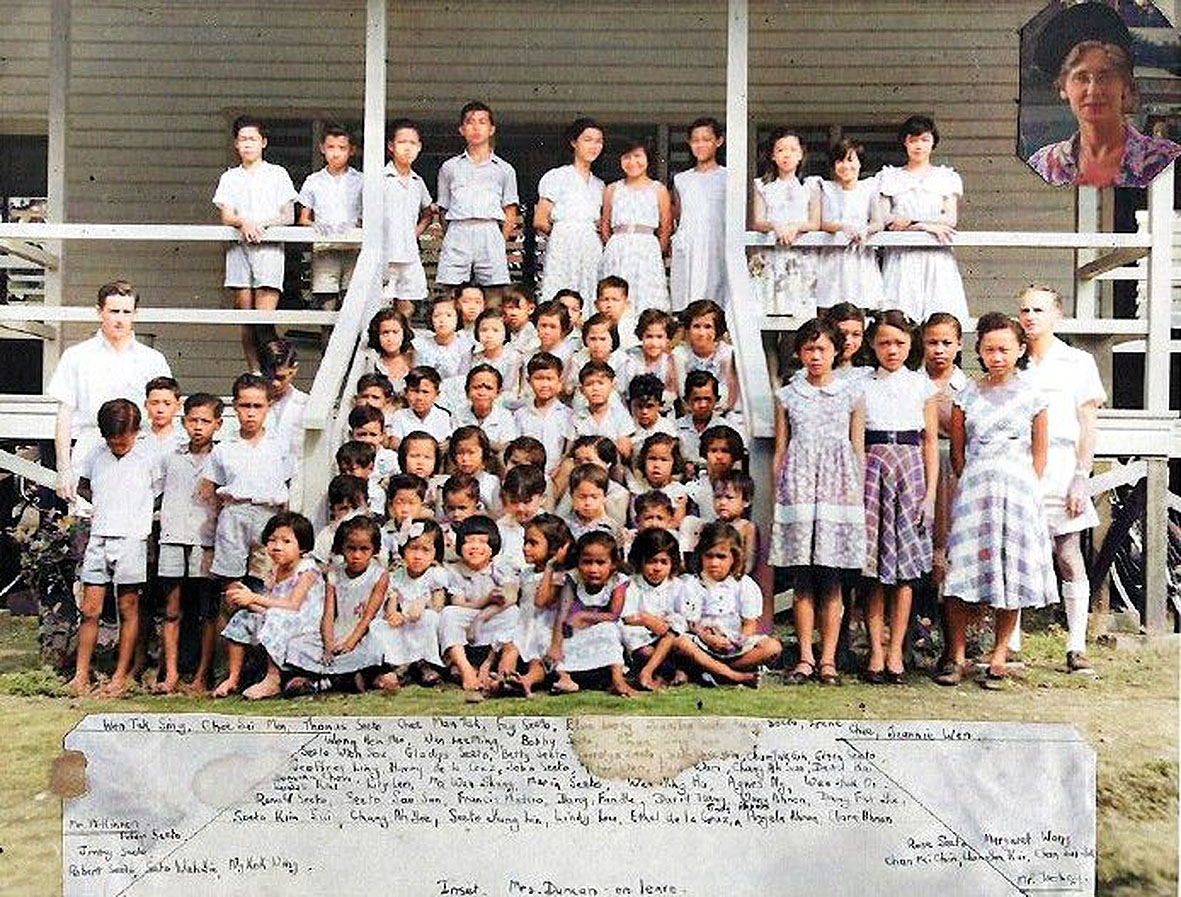 Ken McKinnon and Jeff Tuohey with their students at Lae, PNG, 1955

The instruction was to go to Lae as Head of the Elementary B School (a euphemism for the Chinese School) in Lae. In later times the separation of schools into ethnic groups would have been called apartheid; in those days it had simply been the tradition in PNG, based as much on differences in culture and background, together with the wishes of the parents, as any ideological reason.

The appointment was not one that I sought. I had come to PNG to work with indigenous children, but I could not argue, and it was an interesting challenge. Before this posting came my way, I had been vocal in Education HQ about this separation of types of schools. Its retention was at least an outmoded racial concept. I thought the reality would be hard yakka, with the students needing intensive work to overcome the handicap of having their schooling in English as a second language It turned out to be an unexpectedly great experience, playing. an important part in my own growth.

Partly this was because of the kids, partly because of the kindness of the community and the parents’ circumstances. Most of the people in the community were immigrants or descendants who had first arrived from southern China as coolies, pre-war, imported to work on the copra plantations. Many had been interned or ill-treated by the Japanese during the war.

The post-war administration allowed them and their children to stay in TPNG but without any clarity about citizenship. They were in no-man’s land. Like immigrant groups around the world, they were deeply involved in making the best of their circumstances, using their energy and commercial talents in building businesses. Indeed, by then, Chinatowns had become permanent sections of the main towns of TPNG.

Jeff Tuohey and I, the two Australians on the staff, had enough enthusiasm to become involved with the community and community projects. Perhaps the best accomplishment for that year, a small contribution to breaking down the racial prejudices of the time, came at the end of the year when we successfully engineered amalgamation of the Elementary A Schools for white students and Elementary B Schools for non-white non-indigenous students.

Significant professional insights into how students learn and how much fun can be had in the process, even with young children, came from this experience. School started at eight in the morning, using the normal western curriculum until 2:00 pm, after which an aged Chinese teacher, hired by the parents, took over for another two hours teaching Chinese language and a Kuomintang (anti-Communist) version of Chinese history and culture.

I was always fascinated by that afternoon session. It was a cacophony, with students of all ages congregated in the one group, all reading comics or doing anything but attending to the teacher, while reciting loudly, but not in unison, the words he was saying or had written on the blackboard in Chinese characters. They answered his questions with little semblance of, or attempts by him to achieve, order. Amazingly, the kids learned and remembered what he was teaching.

An outstanding, but unorthodox Australian teacher, Mrs Ford, who had been my predecessor, had filled the students with unlikely stuff like Lamb’s Tales from Shakespeare and other similar books. These feisty kids were apt to produce remonstrating phrases from a wide range of English literature. For instance, when I asked a student to desist from noisy, over-eager chat, he asked good-naturedly what I would do if he did not. ‘I will take steps,’ I replied. ‘How many, sir, thirty-nine?’ a clear reference to John Buchan’s famous novel. Similarly, when I rehearsed a new arithmetic process, someone said ‘You taught us that the other day, sir.’ I explained that it was necessary to recapitulate to ensure new material was really learned.

‘White kids might need that; we are Chinese; we are trained from birth to remember,’ was the good-natured, rather scornful response.

They were a joy. The social position of their parents was still definitely inferior, so they were extraordinarily pleased with our educational and community contributions. Jeff Tuohey and I tried hard to follow Mrs Ford’s example, with a great deal of extra time spent on music, plays, public speaking, western history and customs, sporting events at school and involvement in the community.

One community example was a request to advise on wedding etiquette. Invitees to this Chinese wedding included the District Commissioner and other senior white guests and customers. It was to be a big wedding. You could say that it went off with a bang. Plane-loads of pigs and chickens were flown in from Wau, speeches (ghosted by us) met the standards of any Australian social wedding. And the traditional fireworks display, worth hundreds of dollars, which had been draped over the extra-large old plane trees in front of the school, made an impressively noisy spectacle.

In the Chinese way, small children were omnipresent as parents did not seem to discipline them at all before the age of about eight. When I tried to organise the behaviour of the older children, by stressing the importance of serving their parents before eating themselves, and the need to keep quiet during the speeches, they responded that they knew how to behave. They did, serving respectfully, cleaning up without being asked, and listening intently. They knew what to do and did it without supervision.

Another example of the welcoming spirit came from the community youths with whom I played basketball. When they found that I could not afford a vehicle, they hacked a wartime jeep from the multitude left entangled in the jungle after the war and repaired it sufficiently for me to use, free. Similarly, near the end of the 1955 year, when they learned that Mavis (my first wife) and I planned to marry early next year with a quiet event in February, they thought it must be a consequence of poverty. As they believed in spectacular weddings, they were moved to take over the arrangements, contemplating inviting everyone at their expense.

Wiser heads prevailed, but nevertheless, on the morning of the wedding a sizeable delegation arrived in a utility loaded with presents Most teachers have experienced the pleasure of former students introducing themselves with appreciative comment about their school days. To have such a sustained warm glow from the comments of both former students and parents years later was a huge reward.

We went on leave after the wedding not knowing where headquarters would post me after our return later in 1956.

Editor’s Note: Emeritus Professor KR McKinnon has generously provided PNGAA with a digital copy of his memoir, Brushes with History, from which this story has been abstracted.