Many PNGAA members would like to give new life to personal or family archival papers. Here is how to do it!

I persuaded my 90 year old motherin- law, Marjorie, not to throw out a bundle of letters sent 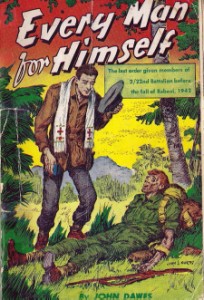 to her by her husband, George, from PNG from 1943 to 1944 when he was serving in the AIF 9th Field Ambulance. After Marjorie died in 2011, I glanced through the letters and letter-cards which were in various stages of decay. What first attracted my interest was descriptions of events and the day-to-day drudgery in army camps in Sydney and Rigo, near Port Moresby.

Harry West encouraged me to preserve and develop them. He pointed out that the letters  were social history and would be of interest to the Australian War Museum (AWM), where they are now preserved, each in a plastic jacket, in chronological order.

Encouraged by the AWM’s Curator of Private Records, I converted the contents of the bundle into a single Microsoft Word document so they can be searched for names, places, officers, regimental numbers, movies and the like, making them much more accessible.

Using a voice recognition package, Dragon Naturally Speaking, I dictated each letter. The package is readily mastered and it is more than of 90 percent accurate.

Once I had transcribed all the letters I added photos, family and historical or regimental details to complete the resource. It is now available to a wider group than ever expected
and may eventually be published as an IBook on ITunes, using a free download application for Mac called I Author.

I wanted to make a legible copy of a book, Every Man for Himself by John Dawes and Ken
Scully which is out of print. It tells the story of the escape of some of Lark Force from Rabaul in 1942 and Father Ted Harris of Mal Mal.

Andrea Williams lent me a copy of the book which was a newsprint paperback probably more
than 40 years old. I used an Optical Character Recognition (OCR) package, OmniPage Ultimate 18, to copy it by scanning two pages on a Hewlett Packard 3 in 1 printer. After proofreading, I edited the scanned material and converted it. The accuracy of the recognition was extraordinarily high.

I then used the package to convert the result into an editable document that allows for conversion to an e-book. Once I have the family’s approval, I hope PNGAA will publish details of where to find the electronic version of the book.

I was surprised at how easy it was to convert the book and how quickly and cheaply it was completed. You can probably get this done commercially quite cheaply but I doubt that I would have ever got around to it. The do it yourself approach has the advantage of allowing you to study the material carefully and put it into useful order.

Dragon Naturally Speaking cost about $120 and OmniPage Ultimate 18 cost $150, both with a discount.