A continuing story of transfers, travels and the testing times of an Agricultural Extension Officer in Papua New Guinea. 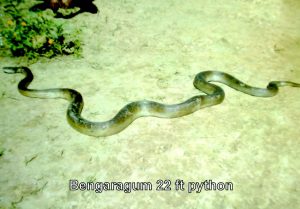 5 January 1960. I flew into Maprik, from my previous posting at Aitape, and took up duty as the Officer in Charge of BAINYIK Agricultural Station. The three-mile drive out to Bainyik was beautifully described by Jeanette Westley (nee Mears) in her book My Walk into Paradise.

“The road leading into Bainyik was the most incredible sight I had witnessed to date. All along the edge on both sides of the road were the most amazing trees I had ever seen and their branches met in the middle to form an enveloping canopy.  It was like driving through a tunnel, which was made by nature.  We stopped at a river crossing so I could see Bainyik from a distance.  These trees were planted by the Germans when they invaded New Guinea and were known as Rain Trees.  Their botanical name is ‘Samanea Saman’.  They can spread over 125 feet and have a glorious umbrella-shaped canopy.  Growing under the trees were the most beautiful tree orchids.  When this road was travelled at night, the trees would light up with fireflies and it just looked like fairyland.  This truly was a grand and romantic entry to Bainyik.”

So many of us were truly blessed to be able to see and experience New Guinea in these earlier days.

Like all of the challenges at each of my postings over the past four years, Bainyik was no exception.  There was a native staff of seventy – agricultural fieldworkers, village trainees and labourers – supervised by a staff of four expatriates including a mechanic.  The mechanic’s wife was employed as a clerical assistant and was paid seven shillings and sixpence per hour!

The station was a busy one. Rice, peanuts, low-land coffee, cacao and corn were the economic crops being encouraged at village level, and experimental crops like sisal and rubber with kapok trees being trialed for coffee shade were all in the mix. Rural Progress Societies, cooperative- like organisations of producers, were well-established within the sub-district and part of our monitoring responsibilities. These organisations funded and supported the ownership of light trucks and trailers, coffee-processing machinery, and other infrastructure.

Station staff were assembled at 0700 hrs when a bell was rung.  Station duties, field extension visits to the villages, and patrol programs were detailed.

Substantial machinery was attached to the Station: a John Deere thrasher, a Cecoco rice huller, a McCormick International AW6 tractor, Ferguson 135 and 165 tractors, a Caterpillar D4 bulldozer, and a coffee pulper together with necessary farming accessories like ploughs, harrows etc.  We were well-equipped to introduce the ‘locals’ to more sophisticated farming!

Interesting to note that a coffee rehabilitation program was launched late 2016 under the auspices of the PNG Coffee Industry Corporation and directed towards some one thousand coffee producers.

Produce was shipped through PAGWI on the Sepik River and, depending on weather, this was a somewhat hazardous journey of a couple of hours or more. Now it is a forty-minute drive. The Department of Plant Industry had established an experimental station at YAMBI between Bainyik and PAGWI to conduct rice trials.  This project was handed over to the Division of Extension in 1960 and was managed from Bainyik.

Every day could be different with regular visits by senior Administration officials and overseas specialists not necessarily directly connected to the line of duty.  On one occasion, I was asked to drive into Maprik to meet Dr. Maurice Willis. Maurice was notable for the medical work he had done for the Red Cross in the Congo.  I relate a paragraph from a letter I wrote home at that time:

“One of the local headmen, a village official, asked in Pidgin “Would I take himself and a sick man to Maprik?”.  I said, “OK where is the sick man?”.  Around the back of the Land Rover appeared a native gentleman, on a stretcher, followed by one of his one talks (wantoks) carrying a broken spear. After a few questions and a look at the ‘sick’ man I wondered why he was still breathing.  The spear had entered just below his breast missing his lung by a fraction, and appeared out of his back below the shoulder, sorry, it went the other way and then broke off.  The spear his one talk was holding was the remaining section.  It all started over a female!!  As yet he hasn’t died.  It is the sort of everyday incident one could dramatize down South, but I will have forgotten it tomorrow”

Maurice and his offsider, Jim Warren, were both attached to the School of Tropical Medicine at Sydney University and were conducting a study of Leptospirosis.  This involved the catching of village rats for eventual kidney dissection and taking blood samples from village pigs. I had been asked to take Maurice, Jim, and Harry Standfast on patrol to carry out the various operations.  Harry Standfast was the Malarial Control Officer stationed at Maprik.

28 January 1960.  The patrol left Bainyik 1000 hrs for BENGARAGUM a village near WINGEI,  arriving 1400 hrs. We set up camp, called the village people together, and explained the reason for our visit. The rat traps were demonstrated and we asked those who were willing to bring their pigs next day so that blood samples could be taken.

Maurice had brought with him a CSIRO preparation of rat bait guaranteed to be unfailing.  That evening the traps were set and with great anticipation we waited for the villagers to bring in a ‘harvest’ of rats.  As the evening wore on no rats!  The locals watched with amusement, exclaiming that the white man’s bait was no gut tru and they substituted it with fresh coconut meat.  Almost instantly we had rats a plenty, which were dispersed into a 44-gallon drum to go back to Maprik the next day with Harry Standfast.

I had some trepidation as to the blood-letting operation considering the importance of pigs in the cultural life of the people; however, all went smoothly, the pigs suffering no ill effects and the villagers and researchers were happy.

Later in the day we sat down with the villages to hear some of their stories.  One of these stories involved a very large python.  The python had swallowed the story-teller’s brother.  Inside the snake his brother was very distressed and at wits end as to how to escape.  He remembered that his cassowary bone knife was in his armband.  With a struggle, he was able to cut open the snake’s stomach and slide out.

We listened with feigned awe and great respect and I said, “No gat, sitori bilong you gammon tasol” (No, your story is not true).  He said he would go and get the snake as evidence.  Shortly after he turned up with a twenty-two foot python and proudly pointed out a large scar on its underside! “Yu savi masta” he said.  Well, seeing is believing although he was unable to find his brother to support his story. I asked him if the snake was for sale – what a story – as I had a vision of it being a prize exhibit at the forthcoming Wewak Show at which I had been asked to prepare an agricultural display.  The purchase was negotiated and dipping into my patrol allowance was happily concluded for five pounds.  The python, willingly, was coiled into an empty patrol box. Jim enquired as to where it was to be kept.  Under the rest-house where it is cool was my response.  Jim was not happy at the prospect of sleeping above a twenty-two foot python even if it was safe in a steel box. The python never made it to Wewak and was returned to its owner the next day due to an unprecedented event that night. INSERT SNAKE IMAGE

The patrol had been issued with a new radio transceiver and a few minutes before 11pm I said to Maurice, “I will try out the new radio”.  I connected the battery and switched it on and moved the tuning dial to hear a voice announcing the 11pm ABC News from Townsville, “Lieutenant Hugh Montgomery was killed today in an Army aircraft accident at Wingello in New South Wales”.  Oblivious to what was said next I turned to Maurice and said, “That is my brother; he has only been married six weeks”.  Maurice asked me if I was sure.  I had no doubts.  Maurice offered to drive me back to Bainyik. Next morning with the benefit of two-way radio, air traffic communication, and through the compassionate officers of the Administration and Steamships Trading Company, I arrived late that night in Sydney to be with my family. 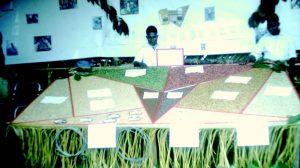 Life got back to near normal on my return from Sydney with patrols and day-visits to villages to inspect and advise on their cash crop developments.  Agricultural trainees under the guidance of European staff or Fieldworkers accompanied these activities.  Rice threshing and milling, packing and shipping peanuts, machinery operation, and maintenance and administrative duties were all part of the mix.  This was a great experience in multi-skilling by all concerned.   Disappointingly the locally-produced rice that was sent into Maprik for prisoners’ rations was rejected by them.  They preferred Australian rice!  In my last story (Didiman’s Diary #6) reference was made to ‘start-up’ work at Lumi and Nuku.  Follow-up visits continued, flying to both locations out of Maprik.

Bob Bunting was the Assistant District Officer (ADO).  Bob and his son were both keen golfers.  Bob had supervised the building of his European-type residence in Maprik replacing his former native-material house.  The lounge room ended up a little out of level.  It had been said that it was designed this way as a ‘putting green’.  The golf course, like so many in those early days, was the airstrip with the greens strategically placed over its length.  There has always been at least one aeroplane story to tell at each posting. I was returning to Maprik from Wewak in a Missionary Aviation Fellowship (MAF) Cessna 172.  Arriving in the vicinity of Maprik, the airstrip was clouded in. The pilot, an experienced ‘older’ gentleman, decided to circle above the cloud looking for a ‘hole’.  This appeared and we literally dropped through to the grass airstrip below which was wet, very wet.  On the approach the pilot told me that as soon as we touched down, to open my door wide. Air brakes no less!   We slid past the Maprik Hotel which was at the end of the ‘strip pulling up with little grass to spare.

Up to this point in time I anticipated I would see out the rest of my twenty-one-month term on Bainyik Station. I had been encouraging my parents and a friend to visit over the Christmas period.  A new ‘M’ type (married quarters) had been constructed and I had been looking forward to establishing lawns and garden in a lovely location shaded by kapok trees.  Not to be, with a message from HQ ‘prepare for immediate transfer to KEREMA, Gulf District, Papua’.

1 October 1960. Formalities were completed and I departed Bainyik via Port Moresby and BAIMURU for KEREMA.