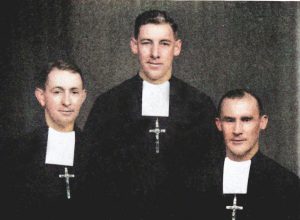 Brothers Augustine, Ervan and Donatus
before their departure for the North Solomons

It is now almost eighty years since three Australian Marist teaching brothers were killed by the Japanese during World War II. While it is not possible to pinpoint their place of death, it seems most likely they died on Sohano Island, the former prewar district headquarters in the Buka Passage.

By 1941 Brother Augustine was principal at the Marist Brothers school at Mosman in New South Wales when the Bishop of Northern Solomons, an American Marist named Thomas Wade, asked for Australian Marist Brothers to come and build education services in Bougainville.

It was clear there was a war looming but Brother Augustine and two other Marist teaching brothers, Brother Donatus and Brother Ervan, volunteered. The three of them began preparations for travel to Bougainville and teaching roles at Chabai catechetical training school. 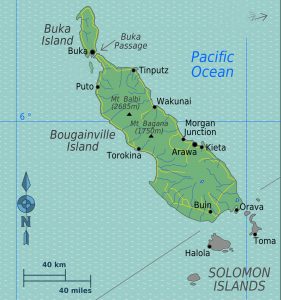 In July 1941 they arrived at Tulagi in the neighbouring Solomon Islands. There the three brothers received a telegram informing them of a change in plans; Brother Ervan was to travel to Marau Sound at the eastern end of Guadalcanal Island where he would switch places with another Marist brother, Brother John, who would then go to Bougainville. Brother John had already been teaching for some time in the Pacific, so the thinking was Augustine, Donatus and Chabai would benefit from his experience.

Chabai was a catechetical training school with around 100 students in residence. The curriculum covered maths, English, religion and practical subjects such as carpentry. The school was self-sufficient, with livestock and large gardens producing rice and all the staple foods of the Pacific. Students and teachers also spent time fishing. Augustine, Donatus and John were settling into their work. Leo Lising, who was a student then, is quoted as saying ‘… they were very happy days’.

The district office was about twelve kilometres away on Sohano Island in the Buka Passage. As the war came closer the Australian Government withdrew and a small contingent of Australian soldiers occupied Sohano. The soldiers warned the brothers to close the school, send the students home and take off themselves. Japanese aeroplanes first bombed shipping in the Buka Passage and the district administration offices on Sohano on 23 January 1942. Then, only a few months after the brothers arrived, the Japanese commenced their occupation of Bougainville.

At first the brothers and students went into the bush to hide from the Japanese. They posted lookouts so they knew what was going on and could not be caught unawares. Bishop Wade came to see them in February and told them hiding was useless, that they should return to the school to wait and see what would happen. The Bishop was worried about the missionaries’ fate if left to the Japanese, but he was equally concerned about the tenets of missionary work.

The inevitable occurred in May 1942 when the Japanese came to Chabai. They called the brothers out of the bush and ordered them to ring the bell. The Japanese told the assembly there was a war and there would be a major battle for Bougainville. They then ordered the school closed and all the students were to leave the school immediately. The brothers were then placed on parole by the Japanese, ordered to stay on and not leave the mission school.

The Japanese continued to visit Chabai regularly and also required the brothers to report regularly to military police (Kempeitai) on Sohano Island, where they had set up their headquarters in the old district administration area.

Throughout their occupation the Japanese soldiers thoroughly looted the school at Chabai. On 14 August, seven days after the American landings on Guadalcanal in the neighbouring Solomon Islands, the Japanese finally took the brothers to Sohano Island.

It is possible the Japanese suspected the brothers were in radio contact with the allies. For some time, local villagers reported seeing the brothers alive on Sohano, but after this the story of what happened gets vague and contradictory. Some people said they were taken to Rabaul.

At the end of the war the Australian Minister for External Affairs wrote to the Marist Brothers informing them that on 19 August 1942 Brother Augustine, Brother Donatus and Brother John had been placed on a Japanese navy cruiser. They said the cruiser put to sea and there was then no clue of what may have happened. The three brothers were declared dead as of the date 20 August 1942.

The Marist Brothers passed this information on to the families of the three men and they came to believe the brothers had been on the Montevideo Maru, the infamous ship en route to Japan when tragically sunk by an American submarine. They had never been on the list of those lost in the Montevideo Maru and in post-war Bougainville. Other stories started to emerge.

Laurie Chan had a trade store at Porton Plantation, very near Chabai. He was interviewed for the Marist Newsletter in 1992 and had been a student at Chabai, and friend to the brothers: He said Australian soldiers had also urged him to evacuate however he couldn’t as his wife was ready to have a baby. Laurie and his wife were taken into custody by the Japanese and he was forced to work for them thereafter as an interpreter. He says the Japanese suspected the brothers were coastwatchers and they were eventually arrested and loaded on to a landing craft. The landing craft took them across to Sohano Island.

Laurie says the brothers were kept there for some months as they were interrogated. This possibility is supported by other accounts from Bougainville. An Australian soldier who served in Buka at the end of the war was a former student of Brother John when he was teaching at Marist Brothers Mosman. This soldier heard stories from local people living at nearby Tarlena Mission Station that sometimes when they were fishing they saw the brothers walking on the beach and they would wave to each other.

Laurie Chan said one day a Japanese officer said to him ‘the brothers will go home to Australia’. He understood this to mean the brothers were to be killed. He said over months it had become obvious that the three Marist Brothers had no information to give. Sometime soon after it seems most likely they were executed on Sohano Island. Laurie said the bodies were not buried, possibly to be found later, but burnt on the beach. This version of events places the deaths sometime in October or November 1942. In his book, The Martyrs of New Guinea, Theo Aerts states the brothers were executed on Sohano in November 1942.

Coastwatcher Jack Read reported Augustine, Donatus and John were taken to Sohano, interrogated and held there for a time before they were taken to Gagan village on Buka Island. However, Read had not seen this himself and must have been reporting stories that confused them with three French-speaking Marist priests. 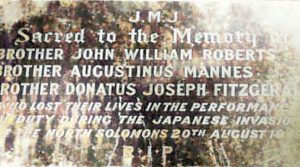 Hugh Laracy says in his book, Marists and Melanesians, that another five Buka-based missionaries were gathered at Hahela and then taken to Sohano around the same time as the brothers. In December 1942 three French Marists were taken by the Japanese to Gagan village. Of the three Australian brothers Laracy simply says they were taken from Chabai and never seen again.

Whatever happened, the brothers were lost—most likely because the Japanese thought the brothers were relaying intelligence on Japanese movements to the allies; so they were interrogated and then killed. Any truth after that was confused as stories were conflated and truth lost in the fog of war.

Brother Augustine, Brother Donatus and Brother John are commemorated on a memorial at Mittagong in 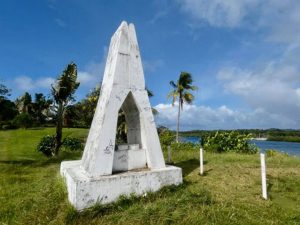 The Japanese Memorial on Sohano Island

NSW. There used to be a memorial at St Joseph’s High School at Rigu in Bougainville but that was destroyed during the Bougainville crisis. Ironically, there is a large memorial to the Japanese on Sohano while the generation of the three brothers have now all died, never really knowing what happened.

Frederick Gerard Mannes was my maternal great-uncle. He was a cousin of my maternal grandfather. We grew up never having heard his name and it was only in 2003, when I was in Australia for a holiday from my job in Madang, that I heard just a little of his story and saw the sadness my family still carried through his loss.