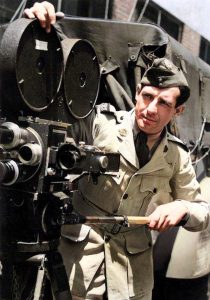 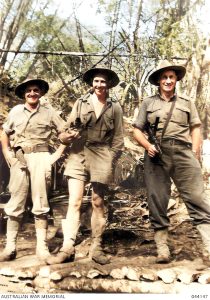 Nearly 80 years after his death, Damien Peter Parer remains one of Australia’s most well-known combat cameramen

He was born on 1 August 1912 at Malvern in Melbourne but was educated largely in Bathurst, New South Wales, at St Stanislaus College. Upon leaving school, after completing his photographic apprenticeship, he moved to Sydney to work with the director, Charles Chauvel, and filmed the Australian classic Forty Thousand Horsemen.

When the Second World War began, Parer was appointed as official movie photographer to the AIF. He filmed the action in the Middle East, Greece, Syria and Tobruk, before covering the fighting in the Western desert. By mid-1942 Parer was in New Guinea ready to cover the fighting against the Japanese.

During this phase of the war, he filmed some of his most famous sequences, some at Salamaua and, most notably, those used in Kokoda Front Line, an award-winning documentary made by Parer and film-maker, Ken G Hall. It was filmed on location in New Guinea in 1942, and shows Australian troops along the Kokoda Trail, the fighting 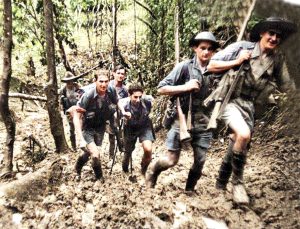 Members of D Company, 39th Battalion, returning to their camp

conditions in the jungle, and the help of indigenous carriers to remove wounded soldiers from the front line. This film was shown at cinemas throughout Australia.

Other important newsreels and documentaries contained Parer’s footage—these included Men of Timor (1942), Moresby Under the Blitz (1942), The Road to Kokoda (1942), Assault on Salamaua (1943) and The Bismarck Convoy Smashed (1943). Most Australians became familiar with his work and through it learnt of their countrymen’s ordeals and exploits.

In late 1942 Parer travelled to Timor to film Australians of the 2/2nd Independent Company, who were fighting a guerrilla campaign on the island. He then returned to New Guinea where he flew on a series of hair-raising Beaufighter operations against Japanese shipping in the Bismarck Sea. After that he moved to the Salamaua area where he filmed, among other actions, the well-known assault on Timbered Knoll. 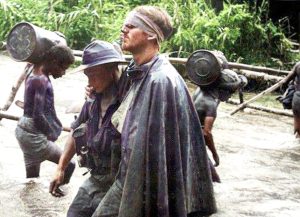 Australian soldier assisting a wounded mate across a creek

over New Guinea. On 23 March 1944, during a period of leave, he married Elizabeth Marie Cotter in Sydney, after which he returned to action, leaving the war in New Guinea behind to accompany the United States Marines.

He filmed them first on Guam and then, on 17 September 1944, during the battle on the island of Peleliu, fought between the United States and the Japanese—keen to get shots of the faces of advancing soldiers—Parer was walking backwards behind a tank, filming a group of marines advancing under fire. He was shot in the back and killed by a burst of Japanese machine gun fire. He was only 32 years old.

Damien Parer was initially buried in a shallow grave on Peleliu but later exhumed, and finally moved to Ambon War Cemetery, Indonesia in 1961.

His son, also named Damien, was born in 1945, six months after his father had died and, in 2004, the Parer Gallery 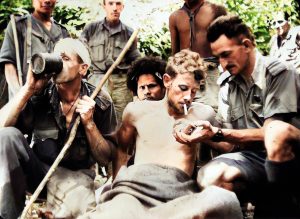 Salvation Army Chaplain lighting a cigarette for a wounded soldier

was established in his father’s honour at St Stanislaus College, in Bathurst NSW.