In 2017 I was working for an exploration company in the far west of the Highlands of Papua New Guinea. Our exploration camp, Kili Teke, was in the middle of nowhere on the border of Hela and Enga Provinces and about 15 minutes airtime west of the Porgera gold mine.

The only way in and out for we FIFO workers was by Bell 212 helicopter from Mount Hagen. Ten of us would be jammed in, with five passengers facing forward and five facing towards the rear of the helicopter which was the same body size as the Iroquois helicopters from the Vietnam era. If you were lucky enough to be on an end seat, then you could look out of the small window and see the passing terrain just below. If you were in the middle seats all you saw was the face of the passengers opposite. There was no space to move and no facilities at all on board, so it was just a matter of sitting tight for the trip of one hour. 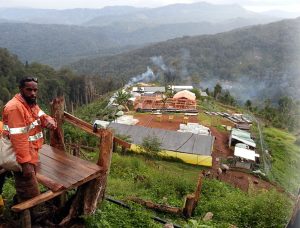 Kili Teke camp was at 1400 m ASL and the mountains around went up to 2000 m ASL. The nearest roadhead was at Pori far away down in an adjoining valley. An unencumbered man could walk down to Pori in one day, but the return trip would always take two days as one would be walking up the steeply rising terrain.

All our camp supplies came in by helicopter but the local village people, usually the women, had to walk to Pori to buy supplies at a small trade store there. They would carry back rice and canned fish and meat, and other items like cigarettes and noodles and, believe it or not, cans of Coca Cola, all of which they carried in string bags slung from their heads. The return trip would take four days, or more if they had children with them.

Up on the mountain high above our camp was a small area on a ridge line that had been flattened by a previous exploration company to make a campsite. The locals used it is a very rough soccer field and a few people had built their houses near it. The track up from our camp was very steep and, in some places, we had to walk on wooden walkways built from trees cut from the surrounding jungle. 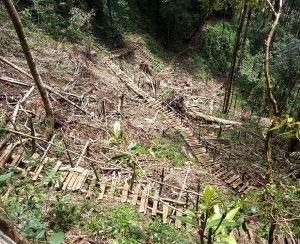 On one occasion we walked up from our camp to meet with the local village people to discuss recruitment of some local men. It was a very contentious issue because they all wanted to be employed and we could only employ a few of them at a time. On this day about 100 men and women were present. It was a good sign that women and children were present as it meant that it was going to be a peaceful occasion but, unbeknown to us, there was a grievance in the village about alleged favouritism by the local leaders when nominating prospective workers. Our company team consisted of me, my PNG field manager and one seasoned police constable who was carrying an M16 firearm. There were seven clans in our area and an argument started between two of the clan leaders about employment grievances. We were there as outsiders and had no legal authority and all we could do was watch.

Every man present carried a very sharp bush knife or an axe. These axes were very similar to axes carried by the Vikings in recent movie productions—that is the axe had a long skinny shaft and small head, so the warrior had plenty of manoeuvrability. These axes are called ‘namba seven’ as they looked like the number 7. In past years when someone was killed by an axe, they would say that a number 7 got him. In recent years most rural deaths are from homemade shotguns or factory-made firearms. 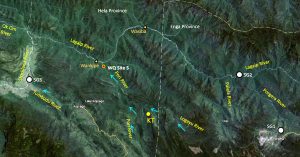 Anyway, this argument flared up and all the men immediately split into two groups, with lots of yelling and screaming and very soon they engaged in man-to-man combat. There were about 25 men on each side and very soon I could see that it was a very ritual type of fighting because there was no blood being drawn. If you have a very sharp bush knife and you hit someone with the blade down it is definitely going to cut them but if you turn the blade over and strike with the back of the blade down, that is with the blunt side down, then it is not going to do too much damage, maybe some bruising. The same with an axe. So, these warriors were dancing around and slapping each other with these weapons and not drawing blood. But, of course, the problem is that if blood is accidentally drawn then it can get very messy … very quickly.

I remember thinking to myself that I had just arrived in this area—it was only my second rotation—and that I had no work experience with this part of the PNG Highlands. I turned to my PNG field manager, and I asked him what we should do, and he said just stand fast. So, we 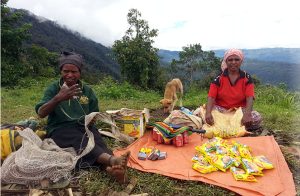 Women selling noodles, Coke and cigarettes carried up from Pori

stood and watched as the men danced around with their weapons and yelling all sorts of abuse, most of it in their local language, which we could not understand. Then suddenly, from just behind us, a firearm discharged, a single round. It was the police constable, who, with good self-discipline, let the combatants fight just long enough to de-energise the situation but not to let it get out of control.

The fighting stopped immediately, and he stepped forward and said in PNG pidgin ‘Yupela laki tru inogat blut, sapos igat haus bai pia’, which literally translated as ‘You are lucky that no blood was drawn because houses would have caught fire’, which really meant that if they had lost control and drawn blood he would have punished them by setting some of the nearby houses on fire. So, the two sides calmed down, but the two spokesmen continued to call out to each other.

Meanwhile, the women and children were watching this and did not seem too worried by it. Yelling and chest beating is a big thing in PNG. Some women had just arrived back from the four-day return trip to Pori and they were displaying items for sale that they had carried back, including cans of Coca Cola. 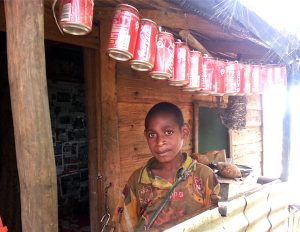 A self-appointed peacemaker stepped forward—he may have been a pastor. He went over and he took a can of Coca Cola from one of the women and he put it on the ground between the two protagonists who were standing about 10 m apart and still yelling at each other. The peace maker said in language (and in Tok Pisin for our benefit), ‘Brothers drink that Coca Cola and make peace and be friends.’ But still the protagonists argued, and the peacemaker went back to the Coke can and opened it and left it on the ground and still the two protagonists continued to argue. The peacemaker then went back and picked up the open can and took it to one of the protagonists and said, ‘Brother you drink,’ and he did. He then took the can to the other protagonist and said, ‘Brother you must drink and be in peace with your brother because he drank from this can,’ and he did, but still the anger was there.

The peacemaker called out ‘Now you have both drunk from this can of Coca Cola and so you must be friends’, but the two men continued calling out and then the peacemaker said, ‘Well, you have both drunk from the Coca Cola can so we might make a small exchange of money just to calm everyone down.’ There must have been an imbalance of accusations and insults, which we did not pick up because of the mix of the local language and Tok Pisin. One of the parties paid the other 20 kina and the other party paid 50 kina and then it was all over, and they shook hands and we continued with our presentation about company business.

I had a fleeting thought that, if I had been able to record this event, it would have gone viral on YouTube.

Coca Cola is so entrenched in local culture that empty cans are used for house decorations.

Post Script: The peace and quiet did not last for long because two months later a neighbouring group of locals, jealous of the benefits that our local village people were getting, attacked and destroyed our drill rig. The company had been exploring for three years but it decided to close the camp. Although I was not in camp when the attack took place, I ended up being on the very last helicopter out of Kili Teke, but that is another story.