Preparing to bail out as his damaged Kittyhawk fighter laboured across the South Pacific, Squadron Leader Ian Loudon of Port Moresby and of an RAAF fighter unit in the New Guinea area, was intercepted and trailed by an Australian Beaufighter until he abandoned the aircraft and was safely aboard an American torpedo patrol boat, which raced to the rescue.

The Beaufighter, which circled the Kittyhawk until the patrol torpedo boat picked the pilot up, was actually looking for another Kittyhawk pilot who had bailed out 24 hours before on his 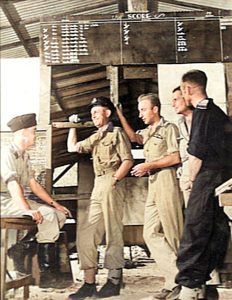 way back from covering a Beaufort daylight strike. Half an hour later the other Kittyhawk pilot was located 50 miles away. The Beaufighter then intercepted a Catalina flying boat manned by Americans and guided it to the dinghy.

The second pilot to be rescued within an hour was Warrant Officer (WO) JEC Arthur, of Burnie, who had been adrift in a rubber dinghy for 28 hours.

The aircraft piloted by Squadron Leader Loudon, who was a sergeant 15 months ago, was hit in three places by fight anti-aircraft fire while strafing Cape Hoskins. One bullet damaged the lubricating system and oil thrown out burnt on the exhaust stacks. With a tremendous expanse of sea between him and home, Loudon set course as a film of oil started to cover the windscreen. The oil was leaking so freely that he prepared to abandon the Kittyhawk as he crossed the south coast of New Britain. At this stage his Kittyhawk section sighted two torpedo boats and directed him to change course.

Just then the motor, which had begun to vibrate intensely, lost power, and shuddered violently. Loudon jettisoned the hood, which struck him above the right ear as the slipstream tore it off. He rolled the aircraft over and fell out.

The parachute opened immediately. He released the harness at 20 feet and dazed himself by landing hard on his face and stomach. He swallowed several mouthfuls of water before he could get into his dinghy. Nine minutes later he was aboard a torpedo boat.

Flight Sergeant Boehm’s Beaufighter, which had intercepted the Kittyhawk’s calls, and another, piloted by Flying Officer R Albrecht, of Bundaberg, circled the dinghy and torpedo boat until Squadron Leader Loudon had been picked up. On the Beaufighter were Warrant Officer Don West, of Merewether, NSW and Sergeant Jack Leary, of Mildura, as look-outs. It was the diversion to the Kittyhawk to which the Beaufighter’s crew partly attributes the location half an hour later of Warrant Officer Arthur after he had been afloat for 28 hours. This event took them sufficiently off their original course to see him 300 to 400 yards from their aircraft, another 50 miles due north. 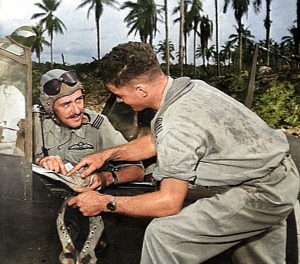 They could easily have missed him, as several aircraft had already done, had they continued the exact course they had been following. While adrift WO Arthur saw searching aircraft turn within 200 yards without sighting him. He watched a Catalina for two hours on the first afternoon and, in the twilight, saw it pass practically right over him on its way home.

He kept on paddling after dark, getting his direction from the Southern Cross. FO Albrecht’s Beaufighter, which was navigated by F/Sgt J Carroll, of Ballarat, dropped a dinghy as an extra marker and a water bottle within 20 yards of the dinghy. Altogether, a large number of aircraft, including Bostons, Beauforts, Beaufighters, Kittyhawks and  Catalina flying boats and two torpedo boats, as well as an RAAF rescue boat, took part in the search. A total area of 5,300 square miles of the South Pacific was scoured.

Editor’s Note: Ian Loudon was a Spitfire pilot in England in 1940, a Wing Commander at age 23, and after his New Guinea service joined the Fleet Air Arm of the Royal Navy.

He was awarded the DFC and was Mentioned in Dispatches. He survived the war and returned to Eilogo Plantation at Sogeri where, post-war, he established a herd of Angus cattle. He died in a car accident at the bridge over the Laloki River on 2 November 1957.