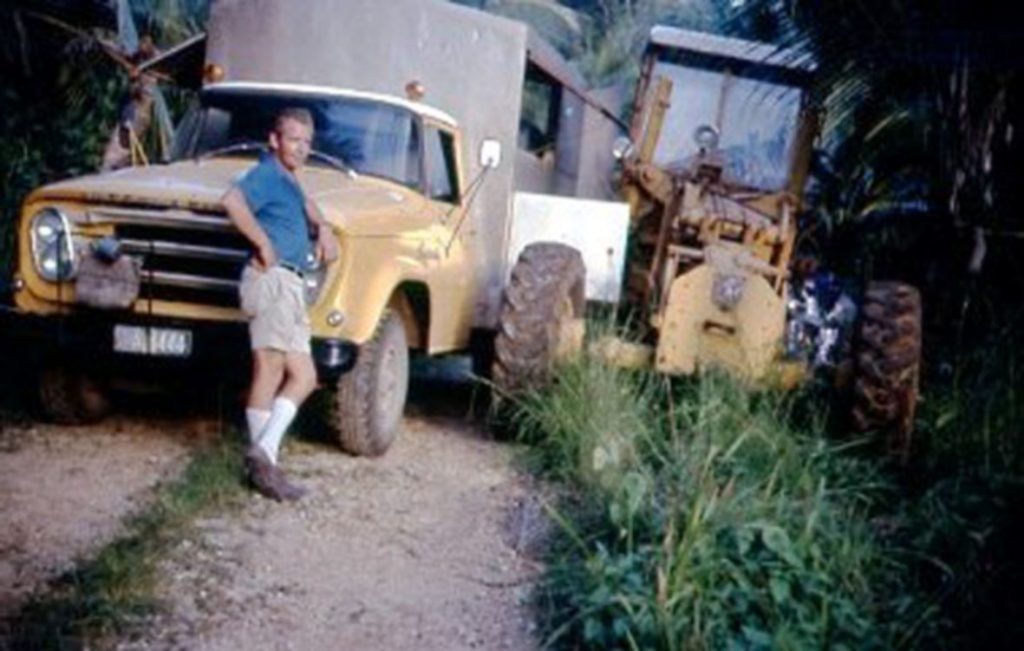 Working on a grader with visitor, Mike Koonan

As the push started towards and up the west coast of New Ireland in 1969 my bulldozers’ track systems suffered huge damage—cracking and high cleat wear, bolts shearing apart due to the hardness of the coronos rock, worn out blade-cutting edges and corner pieces. Ripper tyne shoes deteriorated rapidly and, in some cases, sheared off. All this kept the local mechanics busy. Motor graders suffered similarly with cracking of circle frame components.

Hydraulic failure also occurred under these heavy operating conditions. The workshop truck was always busy. In light of all this, the decision was made to use PWD explosives to fracture the larger coronos formations. As a stroke of luck Japanese war munitions were found scattered in the bush. These were put to good use, sometimes clearing more than was intended. Jap depth charges were found to be effective to severe huge fig tree roots, allowing the dozers to fell the trees more efficiently. Once construction moved to the west side, heavy jungle was encountered and the road surface became muddy with constant rain making it slippery and boggy. 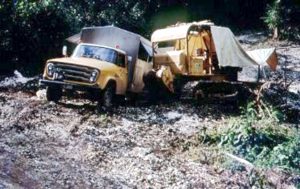 Hydraulic hose and other problems

As an observation, while standing still one morning I can still recall the sound of someone sawing tree limbs, when suddenly a huge bird appeared among the tree-tops. The sound was actually coming from a kokomo (hornbill) in flight through the forest, avoiding the local hunters.

Road construction increased when we linked up with existing tracks to various plantations. The ground became more stable due also to military assistance during World War Two. But many of these tracks were now overgrown. The plantations invariably had wharves, built to receive supplies from Rabaul on small ships. Of course, pallets of beer and cartons of spirits received first priority, followed by food stuffs and other daily needs.

A road camp was established at Panaras Plantation next to a local village, close to the sea. We got cool relief swimming. The mechanics fished and ate well. I usually returned to Tong’s guest house at Namatanai for the night. 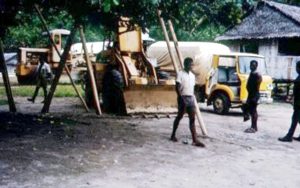 Plant and construction camp on the west coast at Panaras

By then the wheel tractors with tipping trailers were encountering front wheel bearing failure from the numerous saltwater creek crossings. With my local mechanics we decided to modify the outer front-wheel bearing hub caps by drilling, tapping and inserting a grease nipple in each, which proved to be successful. Greasing the bearings became a daily routine. Eventually a number of crossings were improved with concrete culverts.

The new road was now connected from Uluputur to Komalu, Kalili and Tibili plantations. These now had access to Panaras. The planation manager there was widely known as Panaras Jack, a flamboyant character, sometimes seen driving his cream Mercedes sedan known as a burut taxi with its vertical-style headlights. Wearing a white Panama hat and a sweat towel around his neck, cigar in mouth, he cursed the last section of road on which we were working eastward from his property into Kavieng. 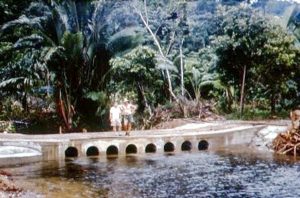 Jack had a great liking for rum so one day whilst he was overseeing his garden boys, hard at work with sarips near his homestead, he suddenly jumped to his feet and let out a yell: ‘Ambush! Ambush!’

The plantation manager raced inside, came back out and cut loose with his revolver, firing over the boys’ heads yelling: ‘Clear! Clear!’ Jack imagined he was under attack. The workers flattened out like lizards and crawled quickly into the bush. When word of this incident got into town, the constabulary paid a casual visit and persuaded old Jack to go on long long leave.

Early in December 1969, the last section of the new road was upgraded from Panaras across the Schleinitz Range to the road junction at Fangelawa on the Boluminski Highway, thus enabling travel from east to west coast and the flow of commerce to Kavieng port. 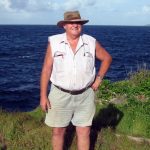 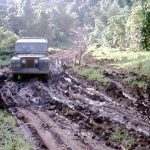 Muddy conditions on the jungle overburden

In 1970 I was transferred to Kundiawa in the eastern highlands because my then wife was not coping with the humid climate. I was quickly promoted to plant inspector. But more about this later