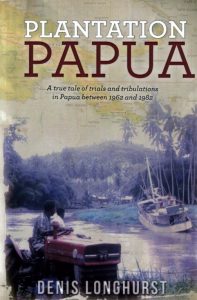 We rescued them from what we deemed to be a primitive and dysfunctional existence, gave them a system of our own predilection, then left them to deal with the contradictions. (Longhurst, 2016)
‘Plantation life is the untold story of TPNG’ was the introduction to an article about Epo rubber plantation, near Kerema, by Ralph Sawyer in the March 2017 edition of Una Voce.
Andrea Williams, in her review of Richard Broomhead’s Living on the Edge of the Universe: Paradise Can Be Hell (Una Voce, March 2015), touched on perceptions of the south-sea islands paradise envisaged by some dreamers (probably mainly during European winters). After all, Broomhead’s experiences were in the New Guinea islands—clear blue waters, pristine corals and white sands.
However, Longhurst experienced twenty years on copra and rubber plantations located on, or near, the south coast of Papua, much of which is better known for its less romantic muddy waters and expansive mangrove deltas and nipa swamps.
Penelope Hope gives some insight into earlier life on a plantation at Kikori from its creation in 1914 and through the 1920s in her book, Long Ago is Far Away (ANU Press, ACT, 1979). An academic work by DC Lewis titled The Plantation Dream—Developing British New Guinea and Papua 1884–1942 (Journal of Pacific History, Canberra, 1996) is essential reading for any serious researchers into plantations in Papua.
Longhurst, however, deals with the difficult years for white plantation managers leading up to self-government and independence and into the following decade. And it is about Papua, which he describes as ‘the last frontier’.
His is an interesting and sensitive account of rapid changes during that period. The chapters in the book’s section ‘From stone axes to city skyscrapers’ are an important record of experiences, observations and impressions of someone who was intimately involved, living in sparsely populated rural areas, far from any towns and remote from the densely-populated Highlands districts from where some of his labourers were recruited.
Fluent in both of the lingua franca (Tok Pisin and Hiri Motu) Longhurst was able to interact and communicate with, and so better understand, his (mostly imported) plantation labourers and also the former landowners who were his neighbours in nearby villages. He was thus one of a minority of expatriates in the private sector to experience such close associations with Papua New Guineans.
Life was sometimes very tough, especially given the isolation and lack of government support and not having the ‘powers’ of a kiap (whom, incidentally, he appears to have generally admired). Marriage and commencing a family added to the complexities, trials and tribulations of working and living in, what was then, surely, ‘the last frontier’ as recently as only forty years ago.
The book makes compelling reading for anyone who is interested in PNG, its history, race-relations and (colonial?) master-servant relations during the years immediately prior to and after independence. It is written by someone who is sympathetic to, and understanding of, the complexities of a rapidly changing world for both Papua New Guineans and their former white mastas, or in the case of Papua—taubadas.
His final chapters analysing the rapid changes from stone to skyscrapers should give food for thought to critics of post-independent PNG and current negative reporting on evolving situations in our nearest neighbour.
To again quote Sawyer, this is truly ‘the untold story’—but now an eye-witness account!
Chris Warrillow, April 2019
ISBN: 978-1-9255901-7-3
Vivid Publishing, WA, 2016; 329 pp, maps & photographs. Available from the author, phone 0409 897 509 or denis.longhurst@bigpond.com. RRP $28.95 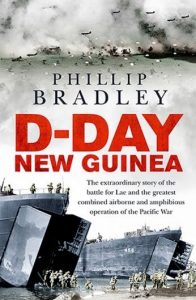 This book tells the extraordinary story of the battle for Lae and the greatest combined airborne and amphibious operation of the Pacific War.
The capture of Lae was the most complex operation for the Australian Army in the Second World War. In many ways it was also a rehearsal for the D-Day invasion of France, with an amphibious landing combined with the first successful large-scale Allied airborne operation of the war.
The author provides an excellent background to the battle and tells the story of the New Guinea Volunteer Rifles (NGVR) and Australian New Guinea Administrative Unit (ANGAU) involvement leading up to and beyond the battle. He also recognises the feat of arms by the Japanese in moving its troops north across the Sarawaget Range to the north coast, losing twenty-five per cent of its force, escaping from the Australian pincer movement from west, east and south. This escape was a result of Australian underestimation of the Imperial Japanese Army and lack of foresight to prevent such an unlikely northern escape. If one is familiar with the area, the book is easy to read and understand.
D-Day New Guinea brings together the extraordinary stories of the Australian, American and Japanese in this battle, and of the fight against the cloying jungle, the raging rivers and the soaring mountain ranges that made New Guinea such a daunting battlefield.
‘Java is heaven, Burma is hell, but you never come back alive from New Guinea’—Japanese military saying.
Phillip Bradley brings a compelling clarity, humanity and new insight into a little known but crucial Australian battle of the Pacific War.
ISBN: 978-1-7606325-8-8
Allen & Unwin, 2019; 336 pp, maps and photographs. Available from Allen & Unwin or your local bookstore.
RRP $32.99