Hector and Baden Wales had made several piles and blown several as well. It was 1937. The heady days of Edie Creek, Upper Watut and Bulolo were far behind them. The jobs at the dredges had dried up and they had drifted down to Lae to work for Guinea Airways. Things were quiet so they decided to take a break for a while.

Fortunately, Brother Clement from the Catholic mission at Vunapope was in port to pick up a marine engine for the M.S.C. slipway at Rabaul. By providing the use of a tractor and wharf crane, the Wales were on their way to Rabaul. Brother Clement dropped them off at the Burns Philp wharf a day later with one Gladstone bag between them. They weren’t in their Sunday best and hesitated from booking in at the Cosmopolitan Hotel but the elder brother reminded Baden that there was a time not long before when they could have bought the hotel so they boldly trooped in. Their fears were realized when they found themselves in the annexe which was another name for the boi haus.

After a sleep and a cleanup, Baden wandered up to the foyer. Who should pop up from below the counter but Mrs. Millar an old friend from Wau.
“What’s on in Rabaul on Friday nights?”
Mrs. Millar gave the thumbs down.
“Not much except the Flicks at Lauri’s. I tell you what though, there’s a poker game on upstairs in the billiard room. Shouldn’t be too rich for you blokes. If you’re interested, come down dinner time and I’ll introduce you.”

In the meantime, the two brothers were transferred upstairs to the hotel proper to a room with a verandah door and a fan. Hector was not a card player but Baden was up for it and presented himself to Mrs. Millar at eight o clock. Upstairs were five men loosening up with snooker on two billiard tables. It was one of those rooms you would find in a Blue Mountains guest house – stuffed fish in glass cases and landscape prints from railway compartments. The drill was that they played Australian poker until 11pm and then one hour of slippery Sam and under 21 pontoon. Drinks were brought up from the bar until two pound ten shillings ran out, no more. You could go home anytime or drop out for a slash or billiards any time. The game closed down midnight sharp, winners or losers. Cash on the knocker, no cheques, no I.O.U.s. The players were a mixed bunch; a senior D.D.S. officer, a W.R.C. man, a patrol officer, and a didiman made up the local establishment while Baden and an old relic from the German days were the outsiders.

To start with everything was friendly enough with no one too hungry or desperate.

As the drinks kept coming up the stairs, things became more lively. The senior officer began to lose and began to chase his money on dud hands. He seemed to feel that it was an insult that these inferior beings were winning but poker doesn’t respect status. At the other end of the social scale Baden was free and easy and almost apologised when he won a hand. The senior officer (and others) sensed this and began chasing him. This is very dangerous behavior. Just before eleven it happened.

The miracle hand dealt was as follows.

Everyone bought cards and it looked as follows

The senior officer could smell money. At most he had a straight or a flush out against him and he could handle the three card buyers. The first round of betting froze out the three of a kind. The Senior Officer tried to frighten the other two with a fourteen-pound bet. W.R.C. matched him with fourteen pounds which shook the senior officer. Fourteen pounds was four weeks wages. Baden was no pro but guessed his four of a kind would kill them but what if, what if the senior officer had bought four of a kind with one of his two buys?
Baden’s four twos would look sick then. But he didn’t have twenty-eight quid to force the issue. And what if the senior officer had fifty-six in his kick?

“I’ll look.”
Baden put down his last fourteen pounds.
The senior officer dramatically slapped his full house down card by card.
W.R.C. didn’t even bother.
“Does me.”

Baden was keyed up but almost apologetically displayed his four twos. The senior officer looked blank but Baden was astute to notice a wisp of a smile cross W.R.C.’s face. Baden wasn’t game enough to count it but guessed about forty pounds as he swept the cards and money in; three months good wages. The last hour went pretty quietly. Everyone bet small with no spare cash to retrieve their losses even if a good hand came up. Baden made himself a small target and went quiet even when the cards fell his way. The night ended friendly enough with Baden going back up the hall to the flash room with the fan although the generator shut down at midnight. Next morning it was eggs and bacon in the main dining room after which the brothers went down to Pak Poy’s for new sets of tropical clobber.

A few days later in the “Rabaul Times” there was a sober article from Mr. Pearson Chinnery, the director of District Services and Native Affairs.

“It has come to the notice of the Administrator that the practice of gambling has become prevalent in the Rabaul area. Card gambling in native villages has resulted in much hardship and violence. Harmonious relations between government and private interests are important in a small community as Rabaul. All classes of residents and citizens must foster this spirit of goodwill. Gambling can become inimical to this spirit. Accordingly, The Administrator has expressed the view that the practice of gambling at “card nights” be discontinued forthwith. At present no regulation is proposed but will be considered should this undesirable practice continue.”

“What brought that up?” was the puzzled topic of conversation that week. Baden Wales had a fair idea whence the complaint originated.
“Sore losers,” was his cryptic comment. 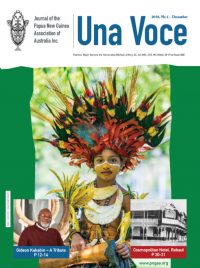 The Curious Case of Christopher Robinson: by John Quinn

Home is Where the Heart Is: by Christine Leonard

A Defender of Native Criminals by Graham Hardy

Captain Jack Radley And The Heyday Of The Fleet. The Story Of The Adventist Mission Boats In The South Seas.