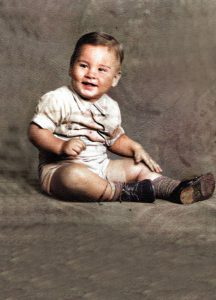 Peter in
Sydney after evacuation, early 1942

Peter Shanahan was one year old when he was evacuated from New Guinea in 1942 whilst his father, Tom, stayed on to fight the Japanese. Peter’s grandparents were Juanita and Carl Wilde of Emira. Juanita was the daughter of Franz and Caroline Stehr of Manuan plantation in the Duke of York Islands. In this excerpt from Peter’s story we hear about his return, by the Burns Philp ship Montoro, to PNG after WWII. In Part 2, in the next issue, we will hear about Peter’s return to his home in Wau.

The war was over and although there were pockets of Japanese in the north-west of New Guinea we were going home. I was five years old, standing proudly alone on the stern of Burns Philp’s SS Montoro, the first vessel of civilians to return to New Guinea after the war, when a gust of wind blew the helmet from my head. Into the wake it went. White churning waters extended to the horizon as the steady throb of the engine pushed us north. Momentarily I considered a hopeless rescue, but the helmet bobbed and disappeared from sight.

My mother had carefully put the helmet on a high shelf in our crowded cabin admonishing me not to touch it. But being an agile boy, I retrieved it and now I was in trouble.

My grandfather, CLB Wilde, or Bruno Wilde, as he preferred to be called, had come aboard before we departed from Sydney. He gave my mother Nita a package of letters and instructions. Then he said goodbye to me and my infant sister Gail. He had two gifts for me – a wonderful Meccano set and a colonial pith helmet to wear when we reached New Guinea.

Wilde came from minor German nobility. He and my grandmother were pioneer copra producers on the island of Emira, located in the Admiralty Islands north of New Britain. He had moved to the Wau goldfields after my grandmother had died from complications during childbirth aged 36. Wilde founded the first commercial coffee plantation in New Guinea, growing Arabica coffee as well as operating several lucrative gold mines.

Bruno was 5 foot 10 inches in ‘old money’, a man of powerful intellect. He had been interned as a German national even though he had revoked his German citizenship when Hitler came to power. Too old for the hardships of plantation life he also suffered from heart problems.

This departure from Sydney was the last time I ever saw him. CLB Wilde died four years later having never returned to his beloved New Guinea.

My mother and I, along with other women and children, were evacuated from Wau in a commercial DC3 (Kurana registration VH-UZK) on the 22nd December 1941. I had just turned one and all Mum could take with her were nappies and baby food. My father, Tom, and the other men remained behind. They had joined the New Guinea Volunteer Rifles to defend their country, homes and families from the rapid advance of Japanese forces. At the end of hostilities Dad had taken his discharge at Lae and waited for the arrival of his family.

Mum spent most of her time in our cabin nursing Gail who had been born in Australia and conceived when Dad came down on furlough after being severely wounded by a Japanese land mine.

I don’t remember Mum punishing me for taking the helmet. She had her own problems to attend to, while I had the run of the ship. Several times she sent me to the wire caged annex in the lounge that served as the ship’s bar to get a small bottle of Schweppes Dry Ginger Ale for her whisky and occasionally she would pour me a small glass of effervescent liquid. To this day I enjoy ginger ale with my whisky.

The other passengers were a mixed lot including returning government officers, planters, business men, miners, wives of service men and others eager to return to their homes and businesses in towns and islands once occupied or attacked by the Japanese. Places with names such as Wau, Bulolo, Lae, Madang, Kokoda, Rabaul, Kavieng, Port Moresby and others.

I was big for my age, strong, talkative with attitude and curious. The passengers kept an eye on me. The presence of children was proof that the war was over and normality was returning. For some we were reminders of their own absent families in this atmosphere of cautious hope.

After crossing the Coral Sea, we sighted the brown kunai-covered hills of Port Moresby. But first we had to dodge funnels and masts of sunken allied vessels, silent reminders of the savagery of war. Montoro, with much shouting from the crew and blasting of the ship’s horn, tied up to the wharf. Immediately hatch covers were moved and the ship’s crane began unloading cargo. Some passengers left us here and others came on board.

I was fascinated by the dark-skinned children, some no older than me, diving for coins. Several passengers threw shillings further out. But these kids were fast, catching the coins before they sank out of sight. The water was clear and full of coloured fish that swarmed in the ship’s shadows and around the wharf pylons. This first encounter with marine life began an addiction that lasted a lifetime.

At night locals, white and black, fished from the wharf catching a variety of fish while the unloading and loading of cargo continued well into the night. I was introduced to wrasses, parrot fish, trigger fish and many others of infinite shapes and colours.

The next day we departed with much blasting of the ship’s horn warning native fishers in outrigger canoes to get out of the way. From now on we were always in sight of land, changing from the dusty kunai hills of Port Moresby to the deep green of thick rainforests. Small rainforest covered islands were aplenty. Sometimes we passed so close that it felt one could stretch out and touch the vegetation. 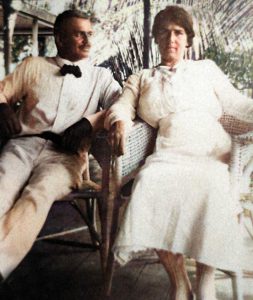 While spending much time on deck observing the passing scenery, I became aware that there was someone nearby. My enquiring reputation had spread and concerned adults took it in turns to watch over me.

Our next stop was Samarai, known to writers and others as the Pearl of the Pacific. This tiny tropical island was chosen by the British administration of Papua because it could be protected against raiding Melanesians. It was also in a prime location for passing vessels. When the Commonwealth of Australia took over Papua it became a centre for the administration of Milne Bay and many island communities in the vicinity.

One of the passengers, a pre-war friend of my parents, took me for a walk around the island which, for an adult, took 20 minutes. This was an extended adventure for a small boy, even though the main purpose was to give my mother relief from my explosive energy and constant questions.

Samarai’s gardens displayed highly coloured plants and butterflies. Offshore islets were covered with swaying coconut palms and fringed by brilliant white sand. Massive clouds tumbled in a dark blue sky over an azure sea. I was in paradise. Mum’s friend spotted a tiger cowrie in the sand and I picked it up. It seemed enormous, the colours and patterns of the shell held me spellbound. For years this ocean jewel lay in my bedroom and became one of my favourite possessions.

Part Two will be published in the next issue.