I was a kiap for ten years (1964–74) in what was then the Madang District of the Territory of Papua and New Guinea. District headquarters were at Madang on the northern arm of Astrolabe Bay, named after the vessel in which the French botanist and cartographer, Jules Dumont D’Urville, visited the area in 1827.

Astrolabe Bay has a comparatively long history of European settlement and its association with the German colonial era marks it out as an area of particular heritage importance. The area’s first European visitor was the Russian explorer and ethnographer, Nikolai Miklouho Maclay.

He landed here and spent two periods living alone among the local people, from September 1871 to December 1872, and from June 1876 to November 1877. He built a hut at Garagassi Point near Bongu village and, using this as a base, he visited many of the surrounding groups collecting biological and anthropological specimens, as well as exploring parts of the mountainous hinterland. By exhibiting restraint, tolerance and providing medical treatment for sick villagers, he won the confidence and co-operation of the local people.

On returning to Russia he attempted to have the Astrolabe Bay area claimed as Russian territory in 1874 but the Tsar rejected the proposal. He also unsuccessfully petitioned the Kaiser in 1884 for Germany to refrain from annexing the Rai Coast area. He made a brief final visit to what was by then being referred to as the Maclay Coast, on a Russian corvette in March 1883.

After his departure there were visits to Bongu by gold prospectors in 1878 and 1879 on the ships Dove and Courier. The prospectors initially received a welcome from the Bongu villagers, when they arrived on 29 August 1878, as they thought the vessels were bringing Maclay back. These gold-seeking voyages had been prompted by rumours that Maclay had discovered gold in the Astrolabe Bay area.

The gold seekers spent three days fossicking in the Astrolabe Bay hinterland, and experienced prospectors in the party declared the area had no appearance of being auriferous. On their return to the coast they decided to try areas further to the west. On 9 September they moved up the coast to the islands named the Archipelago of Contented Men by Maclay where they found a good anchorage.

The anchorage at Ileg or Bongu, was one of the few protected anchorages along this exposed coast, and it was here that the first German explorers came ashore. Otto Finsch and his party on the vessel, Samoa, travelled north after examining Finschhafen, the site on the Huon Peninsula to which the ornithologist gave his name, and were the first Germans to land at Astrolabe Bay. They spent some time evaluating the surrounding area which, at a later date, became part of north-eastern New Guinea, designated as Kaiser-Wilhelmsland.

The party camped near the inlet at Bongu village, which they named Port Constantine, and where they raised the German flag on 17 October 1884. Subsequently, however, their claim of sovereignty on behalf of Germany was initially rejected by that government. 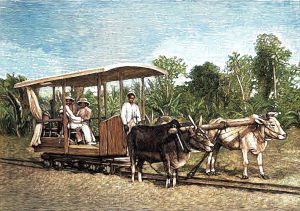 Members of this expedition also negotiated the purchase of 100 acres of land from the local villagers, paying with beads, tobacco and pieces of hoop iron.

The German Reich eventually took formal possession of the northern coast of New Guinea later in 1884. As a result of Finsch’s favourable reports it was decided in 1885 that the initial German settlement on the mainland would be at Finschhafen. The German Government was reluctant to assume the financial burden that setting up colonies would involve, so they handed over responsibility for their overseas possessions to a series of chartered companies. Administrative responsibilty for their colony in New Guinea was passed to Neu Guinea Kompagnie (NGK).

Finschhafen proved to be a poor location for a settlement and was abandoned by the company in 1891, after many of their officials and workers succumbed to malaria. Lutheran missionaries, however, remained and created an early headquarters for their activities along the Morobe coast. 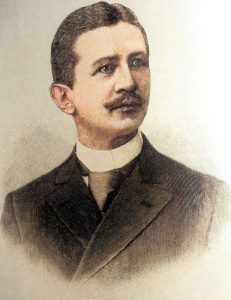 By 1889, the NGK had become quite disenchanted by the problems they had encountered at Finschhafen and asked the German Government to reassume control of the colony, which they did for a trial period of three years.

The next site selected for the German Administrative centre was at Stephansort near Bogadjim. The NGK had, by this time, taken back control of the colonial enterprise and selected a location inland from Erima in Astrolabe Bay for their new station, and the move was under way by 1892.

The Germans originally intended to establish themselves near Bongu, but the villagers there, heeding Maclay’s warnings, rejected all offers to part with land for a settlement so the colonists had to move further north to the Bogadjim area where the villagers were more welcoming. The Rheinish Lutheran Mission also took up an area of land there for their own purposes at this time and, eventually, built an outstation at Bongu in 1909.

Road building into the interior from the new settlement was effectively blocked by the Finisterre Range, and made difficult along the coast by innumerable swiftly flowing rivers. Transport to other centres had to be by ship although movement of goods around the Bogadjim area was assisted by the construction of a network of railways. These assisted in the collection of harvested tobacco leaf, which was one of the major crops to be grown there.

Rolling stock consisted of bogie wagons for the transport of produce and several bogie carriages for transporting management personnel. The German officials, their families and visitors rode around in these well-appointed, ox-drawn carriages which were in the charge of Malay drivers. For the German officials, the railway provided the ability to move slowly but comfortably around the settlement.

Labour for the plantations had to be imported as the local villagers shunned the settlers and would not work for them. In the six years after 1891, 1,000 Asian labourers were imported and employed on the four Bogadjim plantations. They brought with them diseases, including cholera, dysentery and influenza, which affected the settlers and local villagers and resulted in a very high mortality rate among the labourers themselves—allegedly up to 60% in one period on record. 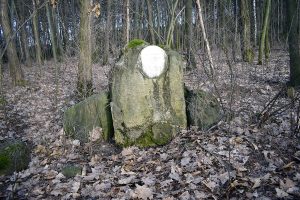 The Germans commenced a series of exploratory expeditions from Stephansort and, after discovering the mouth of the Sepik, a voyage up this great river was made in 1887. Dr C Schrader was a member of this party and his work was commemorated by having the Schrader Ranges named after him.

Perhaps the best-known name associated with Stephansort is that of Curt von Hagen. He was an experienced administrator with a distinguished career in other German colonies. In 1893 von Hagen was appointed as the Director General of the NGK and also as the Acting Governor of German New Guinea and took up residence at Stephansort.

In 1897, two German explorers, von Ehlers and Piering were killed in the course of an ill-fated attempt to walk across New Guinea. Departing from Stephansort, they reached the headwaters of the Lakekamu in British New Guinea but by then their food was nearly exhausted and sickness was rife among the party. The majority of the expedition members wanted to raft down the river, but von Ehlers distrusted the water and wanted to continue by land. There was then a major disagreement. Two policemen, Rangia and Opia, from Buka Island near Bougainville, became enraged at this example of incompetent leadership, which threatened the lives of everyone in the expedition. They decided to act to save their lives and shot both the Europeans and then three of the carriers who expressed alarm at their brutal action.

Rangia and Opia were returned to Stephansort by British officials after they reached the Papuan coast and claimed that the missing members of the party had died of malaria. The true story was revealed by one of the surviving carriers, and the two policemen were arrested and committed to trial for murder. On 13 August 1897 they both escaped and, after killing a Chinese fisherman and stealing a rifle and ammunition from his store, they fled north along the coast. They crossed the Gogol River and hid in the mountains inland from Bili Bili Island.

The escapees had been at large for many weeks when reports reached Stephansort that the two murderers were planning an attack on the settlement. In response, the Germans mounted a major expedition consisting of 32 armed Europeans and natives and set out to find them. Rangia, familiar with the use of firearms, set up an ambush for his pursuers as they were about to cross a small creek. Von Hagen was in the lead of the party and when he came into view he was shot and killed. The Bukas escaped and the pursuit was then abandoned in order to bring von Hagen’s body back to the settlement by boat. He was buried at Stephansort the next day and the Rhenish Missionary Albert Hoffman conducted the funeral service.

Five days later the escapees were in turn ambushed by local Gaib men when they were seen swimming across the Gogol and killed after an epic fight near the mouth of that river. Opia was quickly overpowered and killed, but Rangia put up a stout resistance and was found to have 23 spear and arrow wounds in his body when he finally succumbed to his attackers. The heads of the two escapees were cut off by the Gaib natives and brought back to Stephansort where they were hung on the posts of the gate to the prison compound as a warning against any further insurrection. 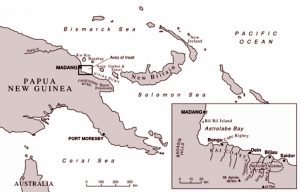 Map of the area

Not unreasonably, the von Hagen family sought some monetary compensation for his death in the overseas service of the Reich. However, their approach was initially rejected on the grounds that as the Acting Governor, von Hagen should not have become involved in the task of apprehending criminals. Later the Berlin authorities relented and did pay a nominal amount of compensation to the family.

A stone monument was erected in the graveyard of the settlement by the government in memory of von Hagen and his work in the colonies. In 1896, a year before his death, the two German explorers, Lauterbach and Kersting, had sighted a peak in the mountainous interior of New Guinea and named it Mount Hagen in his honour.

In 1900, there was further violent resistance to the German colonists when New Guinea police members, rebelling against harsh treatment by German officials, shot dead three Europeans and a Chinese at the Astrolabe Bay settlement. The conspirators plotted also to kill all the Europeans in Madang. In 1904 these numbered only about 26 but the rebels were betrayed at the last minute. Nine were captured and later six were executed for their crimes.

The depredations of disease followed the Stephansort settlers from Finschhafen, including the ever-pervasive malaria. Now smallpox, almost certainly introduced with the Asian labourers, spread through the community in 1896 and 1897.

The NGK and its officials came to dread Stephansort and its pernicious diseases and in 1897 began to plan to again move its administrative centre, this time from Bogadjim to the site of Modilon Plantation at Friedrich-Wilhelmshafen (now called Madang), which was adopted from the name of a small island near Finschhafen.

The four tobacco plantations established by the Bogadjim settlers were turned over to copra production and this was achieved in 1902. Concerned by the continuing high death rate among the settlers, the Germans decided their administrative headquarters should be moved yet again, from Madang to Herbertshöhe (now Kokopo) on the Gazelle Peninsula in 1899.