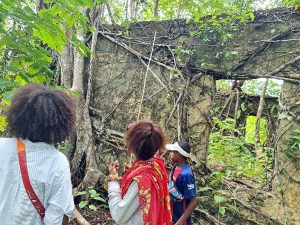 In 1872 the vessel, John Knox, under Carl Thorngren, lost its way and landed in Milne Bay while carrying Lifuans from the Loyalty Islands to the Torres Strait Islands mission of the London Missionary Society (LMS) established the year before by the Rev. Samuel McFarlane.

Here the olive skins of the people, the decorated canoes looking like Roman galleys and the relatively high status of their women, reminded Thorngren of Polynesians and he told McFarlane of his discovery. Four years later, in 1876 WG Lawes, pioneer LMS resident in Port Moresby, with McFarlane, took a party of Loyalty and Cook Islands mission teachers to Milne Bay and nearby islands. The Loyalty islanders were Kerisiano, Tom, Siweni and Mataika. Two of these built a house and church at McFarlane’s landing place called ‘Dimdim Creek’ (men who traded in iron).

On a subsequent voyage Lawes or McFarlane left a fifth teacher, Dieni. As soon as a large bush material house was finished at Killerton Island Dieni moved fom the mainland for health’s sake. Soon afterwards Dieni’s wife died in childbirth. He told the people to make lime, and afterwards they built the double-storey house where he lived with his second Loyalty Islands wife.

Dieni was a well-respected mission teacher but he was removed by the LMS pioneer, James Chalmers, for shooting birds of paradise and selling the plumes to traders against the rules of the society. 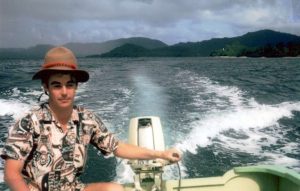 The second island group to arrive in Milne Bay were from Samoa: Ma’anaima, Filimoni and Toma. They landed at Samarai in September 1891 and settled on three villages near East Cape where, according to the resident English missionary, CW Abel, they ‘went into their new work with something like the soul of the Salvation Army’. A fourth Samoan teacher, Mataesi, then arrived. He moved into the double-storey concrete church at Killerton built by Papuans under his predecessor, Dieni’s direction. Many other Samoan teachers or faifeau went to Milne Bay in the 25 years afterwards.

Beside Killerton Island, ruined houses and churches built by Loyalty Islands teachers and dating from 1879 include those at Bou, Lilihudi, and a stone palisade at Tubetube.

The lower walls of the Killerton church are still visible. Some readers may even compare the vine-encrusted ruins to those larger buildings at Angkor Wat in Cambodia. The featured photograph was sent in 2020 to the writer by David Mitchell, a resident of Alotau. It depicts Papuan children from surrounding coastal villages inspecting the surviving lower walls of the structure at Killerton.

This brief account may be of interest to readers. The collection of ruined buildings should become part of PNG’s historic material culture. They should be protected and preserved for future generations.