The PNGAA congratulates Rear Admiral Peter Briggs and his team on the Fugro Survey for the successful expedition and huge achievement in locating AE1.

The disappearance of AE1 was the first loss for the Royal Australian Navy and the first Allied submarine loss in World War I; a significant tragedy felt by our nation and our allies.

After 103 years since her loss, it was announced on 21 December 2017 that HMAS AE1 was located in waters off the Duke of York Island group in Papua New Guinea.
The Royal Australian Navy submarine was lost off Rabaul on 14 September 1914 with all 35 personnel aboard.

An expedition to locate the submarine took place in waters off the coast of the Duke of York Island group in Papua New Guinea this week. The search vessel ‘Fugro Equator’ located an object in over 300 metres of water, later confirming it to be AE1.

The vessel appears to be remarkably well preserved and apparently in one piece.

Photo: Royal Australian Navy”The boat and her crew, who’ve been on eternal patrol since 1914 … have now been found,” Minister for Defence, Marise Payne said.

“I truly trust that this discovery will bring peace of mind to the descendants of the families of the crew who lost their lives on board and perhaps in time it may also enable us to discover what caused the submarine to sink.”

The submarine was the first of its kind for the Australian fleet and was 55 metres long.

“For the Navy, it demonstrates the persistence of a view that fellow mariners always have and that is, we always seek to locate and find where those who sacrificed so much for their country actually laid at rest,” Chief of Navy, Vice Admiral Timothy Barrett said.

The previous searches helped to narrow down where the wreck might be and improvements in technology helped discover the final locations.

Former Commander with the Royal Australian Navy, John Foster OAM, spent his retirement researching the fate of the submarine AE1. His passion, commitment and what was learned from his expeditions were inspirational and significant.

Following many years of detailed research and 12 unsuccessful expeditions funded both privately and by government, the Royal Australian Navy teamed up with a range of search groups in this latest expedition, funded by the Commonwealth Government and the Silentworld Foundation, with assistance from the Submarine Institute of Australia, the Australian National Maritime Museum, Fugro Survey and the Papua New Guinea Government.

They commissioned the most comprehensive and technologically capable search ever committed to finding AE1 and the 35 Australian, British and New Zealand men entombed within.

The expedition was embarked on the survey ship Fugro Equator which is equipped with advanced search technology.

The team of maritime surveyors, marine archaeologists and naval historians scoured the search area with a multi-beam echo sounder and side-scan technology in an underwater drone flying 40 metres above the sea bed on pre-programmed 20 hour missions.

The data collected was analysed and a three-dimensional rendering of the underwater environment was produced before dropping a camera to confirm the find.

Following the discovery of the submarine, a small commemorative service was held by those on-board the survey vessel to remember those officers and sailors who lost their lives 103 years ago.

This significant, historic, military find, is something for which the descendants of the men on board, as well as all Australians and Papua New Guineans will be very thankful.

The exact location of the wreck will be kept a secret for now, with the Australian Government working with the Papua New Guinea Government to preserve the underwater site and to form a plan for a lasting commemoration. 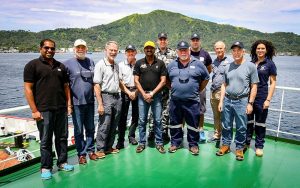