I walked the Kokoda Trail many years ago. Tasked to do an election patrol for the House of Assembly (I was the Returning Officer, amongst other things), I started from my station at Tapini. I crossed the Owen Stanley Range and followed down the north-flowing Chirima River. By the end of this I was as close to Port Moresby as I was to my station, so I continued on to Kokoda and in the next four days, walked from there to Port Moresby. (In those days walking Kokoda–Port Moresby was usually considered to take four to five days.)

The last two days into Kokoda had been quite long days. After starting at 6.00 am, at about 10.00 I said to my porters: ‘Where do we stay tonight?’

‘In a cave,’ they replied. We were travelling light with a couple of ballot boxes and no tents. At about 2.00 pm I asked: ‘Where is this cave?’ They replied: ‘We don’t know.’ ‘So how will we find it?’ ‘Oh, someone left earlier this morning and he said he would put a stick on the track with a red leaf on it.’

Sounded great, a stick on a thin track in the middle of the jungle, with leaf attached!

It reminded me of a trip about a year earlier whilst walking up a remote valley on a wet dreary day, through stinging nettles with leeches and mosquitos. When I came to the top of the pass I saw a bundle of long stringy sticks. They appeared quite out of place, like rafters for a house but with no houses. When the porters arrived, I asked what they were for. They replied: ‘We knock the Bird of Paradise (Raggiana) out of the sky when they fly out through this pass.’

I was pretty exhausted and thought this sounded ridiculous but, just then, a flock of Raggiana flew low through the gap. I was astounded. I had never heard of Raggiana flying in a flock, only in pairs, if that. Maybe there were twelve to fifteen birds. I took 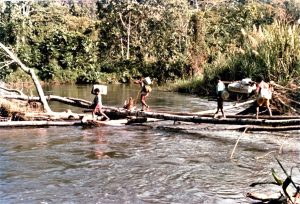 more interest and they explained that they hid in the scrub with their sticks vertical, absolutely still. At the first sight of the birds they waved their sticks frantically, hoping to knock a bird or two down. Usually, it was successful.

Back to the Kokoda Trail. At about 6.00 pm, with the last light disappearing in the jungle, I said: ‘That’s it. I’m stuffed,’ and sat down in a puddle of water. My back to a tree, and rain still falling lightly, I looked at the leeches on my legs. They can stay there for the night, I thought. ‘This is not so bad, at least no one is shooting at me.’

About 3.00 am I awoke. It was still raining. When daylight started to filter through the trees I got up, stretched a bit, and said to the porters: ‘I’m heading off.’ Within five minutes I found it. A stick on the track in the middle of the jungle with a red leaf on it. A sharp smooth cut and the end split and a bright red leaf projecting. As good a signpost as any. I waited for the porters to come and said: ‘Well, let’s have a look at this cave.’ It was little more than a hanging rock. Places like this are rock hard and offer little comfort, often with little bitey things. But they are out of the rain. Today’s walk was only for eight hours and so I arrived at Kokoda.

Kokoda had a rubber plantation and a government station with airstrip. A few miles away Mount Lamington had erupted violently in 1951 wiping out the government station at Higaturu as well as local villages. The people are the Orokaiva. I had some good police from there.

From Kokoda it is two days walk to the top of the pass (at 7,000 feet), Myola Lake (swampy) and Kagi village. The people on the southern side of the range are the Koiari.

At Kagi a couple of Australian backpackers struggled up. Huge back packs, heavy shirts, long pants with all pockets stuffed with 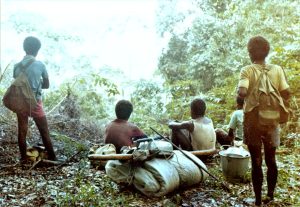 gear, boots, hat and the first one with rope hanging off his belt. I don’t know why. ‘G’day mate,’ I said, with a cheery grin. He looked at me with disdain. I was wearing a torn T-shirt and dirty boxer shorts. No boots. I had lost them long ago and was going bare foot. No hat either. He struggled past without a smile or curious gesture of any kind. ‘Nice day’, I added, but there was no response.

His mate came along a couple of minutes later and I gave him another hearty ‘G’day, mate,’ but he wouldn’t talk either. He was not impressed with me. Not a word was spoken. Clearly, I was not dressed so stylishly as these backpackers. Head down, he struggled past. The top of the pass is an old garden area and the track is, from time to time, overgrown. When it rains the grass lies flat. The track cannot be seen. On occasions trekkers have been lost or rather, they have lost their way. Now me, I would go bare foot, feeling the way of the track with my bare feet.

There were five villages and five airstrips on the way down to Owers Corner—Kagi, Efogi, Menari, Naro, and I forget the other one. Bodiunomu and Suria are further to the west and then you have the Goilala, where I had come from. The mountains are far more interesting in my opinion—11,000 to 14,000 feet. Mount Albert Edward is a large alpine grassland with deep glaciated valleys, rhododendron forests and lakes—very pretty and very cold.

The Koiari are a relatively small group of people, numbering little more than 1,100. They live in small villages. They used to live in tree houses built in the very tops of trees for their protection. Today they are outnumbered by Highland settlers who have migrated to the old and decaying rubber plantations, and to newer settlements around the Sirinumu dam. They are very different from their neighbours to the south-west, the Motuans, who live on the edge of the sea. Indeed, the Motuans lived in houses out over the sea in fear of their enemies, the Koiari.

The plateau rises up to the Kokoda pass (at Kagi). It is generally forested and drained by small streams which flow to the west into the Brown river. The Goldie River is to the south and it, too, flows into the swamps with the Brown River. Setting out from Kagi will take you down and up, and up and down, and so forth, to cross more streams, to the Goldie River. After two days we climb up to Owers Corner, the start of the dirt/gravelled road to our destination, Port Moresby.

Approaching the top in the late afternoon I heard familiar voices and one boldly proclaiming: ‘Kiaps never go on patrol anymore.’ To my astonishment there stood Steve Cutlack, the former mature-age patrol officer, now tour operator, who had come up the range with a small group of tourists. I had to correct him, though I have to admit, it may be quite rare. Steve lived down on the Laloki River near 12 Mile. Although already crowded in his vehicle, Steve agreed to give me, and my boxes and ballot boxes, a lift to Port Moresby. There is nothing worse than finishing a patrol walking down a long hard gravel road. Thanks, Steve.

A couple of days in Port Moresby allowed me to complete my electoral returns before returning to my station, Tapini, by aircraft, in forty minutes. My five porters also returned to their mountain home, the Catholic mission at Yongai, but they had to walk. We had shared a tough, but interesting, journey together. Telling stories about the bush, the war, the government, the parliament, past and future—we forgot the rain and the cold.

The Catholic mission did a fantastic job in this area and the priests were among my best friends. But they have all gone, having returned to Europe or having died and been buried either on their mission stations or on Yule Island. So too have all the kiaps, albeit many stayed on in various other roles after Independence, but they too are now old and retired or dead. u