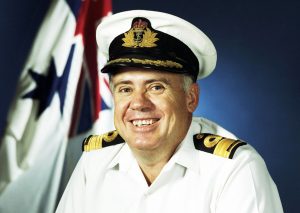 On 18 October 2020 Commodore Sam Bateman, AM, RAN, died aged eighty-two. He was one of the leading maritime strategists of his generation and has left a significant legacy.

Sam was born in Cottesloe, WA on 4 May 1938 and joined the Royal Australian Naval College as an Intermediate Entry cadet-midshipman in 1954. Among his class of thirty-two was a future Chief of Naval Staff, Ian MacDougall, two Rear Admirals—Jerry Carwardine and Tony Hunt and four Commodores—Max Sulman, Phil Mulcare, Peter Mitchell and Sam.

There must have been a strong group dynamic from the start amongst the twenty-eight Australians and four New Zealanders—all would graduate from the college, an achievement managed by only a handful of other entries.

Soon after becoming a qualified seaman officer Sam joined the patrol tug HMAS Emu based in Darwin. He was soon involved in the rescue of the American magician, John Calvert, and stayed onboard the disabled yacht, Sea Fox, until she could be beached on Elcho Island. He was then appointed Executive Officer of the armament store carrier HMAS Woomera. On 11 October 1960 the ship was disposing of 140 tons of time-expired ammunition twenty-three miles off Sydney Heads when an explosion occurred and then a fire took hold. Woomera sank with the loss of two sailors. The unconfirmed cause of the explosion was thought to be a parachute flare, which contained a friction igniter which may have been triggered. Sam and his captain were both court-martialled and acquitted.

Nevertheless, Sam’s career prospects were now uncertain. To his good fortune he was appointed to the newly-commissioned frigate HMAS Parramatta under the command of Commander Guy Griffiths. Parramatta and the equally new HMAS Yarra undertook a busy south-east Asian deployment in which Sam was able to meet his captain’s exacting standards. Happily, during his time in Parramatta Sam married Lois, and at the end of his time in the ship, Guy Griffiths recommended Sam for a sea command.

The first of Sam’s four sea commands came soon enough when he became commanding officer of the general-purpose vessel HMAS Bass in January 1963. Soon after Bass was home-ported in Darwin. During his time on Bass he rescued fishermen from the grounded Paleron, as well as discovering the wreckage of a missing RAAF Vultee Vengeance on a remote stretch of the Arnhem Land coast. Some charts of that region at this time relied on nineteenth-century surveys. Sam took an interest in updating them and was awarded the 1964 Shadwell Testimonial Prize (which dates back to 1890) by British Admiralty for the best survey of a coastline or anchorage by a non-hydrographer.

In 1967 Sam was selected to commission the predominantly PNG-manned HMAS Aitape, the first of the Attack Class patrol boats destined for the PNG Patrol Boat Squadron. Through engagement with his ship’s company, Sam developed a deep interest in the complexities of PNG, and later Pacific islander, societies and cultures. As a newly-promoted Lieutenant Commander, Sam was made Senior Officer of the Squadron and helped develop the operational and administrative orders for the new boats. The five new boats were based at HMAS Tarangau, the revitalised Manus Island naval base. These were happy days for Sam and Lois and their young family. During his tenure Aitape, in company with HMAS Ladava, steamed 230 miles up the Sepik River.

Whilst in command of Aitape, Sam studied for a Bachelor of Economics degree graduating in 1970, just before becoming Executive Officer of Parramatta. In late 1971 Sam returned to New Guinea for a formative appointment as Naval Officer in Charge Port Moresby and Director of Maritime Operations. Both he and Jim Nockels, the Australian Defence Representative in Port Moresby, advocated, largely unsuccessfully, for a more maritime focused PNG Defence Force rather than one that was more land-centric. For Sam the links between defence policy, broader security and economic issues were clearly visible in PNG as the country approached independence. (For more insight into this period, listen to Sam in the three-part Australian Navy History podcasts on the RAN in PNG.)

In 1975 Sam joined the Australian Naval Institute one month after its formation. He would go on its council as postings allowed, as well as being the editor of its journal and a regular contributor to the institute’s activities. He remained an active member for the rest of his life.

In 1977 Sam was given his third sea command, the trial ship for the Australian Mulloka sonar, the frigate HMAS Yarra. Promoted to Captain in June 1980 he served as Director of Naval Force Development and conducted a study on maritime trade. 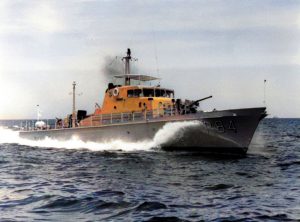 He then joined the Strategic and International Policy (SIP) Division and was involved in the finalisation of the UN Convention of the Law of the Sea (UNCLOS). He also took part in the work to produce the influential Oceans of Wealth Report. Within SIP he again worked with Jim Nockels who said:

Sam contributed in no small way to a better understanding of Australia’s maritime security environment. He worked tirelessly, and with great humour, encouraging associates and students to broaden their understanding of Australia’s geostrategic position and the importance of maritime power to Australia’s security. I recall the enthusiasm he brought to SIP Division in focusing on the vital importance of the Law of the Sea and maritime issues at a time when our defence planning was heavily dominated by land operations. I will always remember him as open and jovial, even if you disagreed with him. His enthusiasm was contagious and continuous. Sam made a long-lasting contribution to our strategic thinking and the development of a more balanced Australian defence capability.

Sam’s final sea command was the destroyer HMAS Hobart which undertook a deployment to Canada and the US West coast for the Royal Canadian Navy’s 75th Anniversary Review. On the deployment Hobart visited Pago Pago where Sam was delighted that he and some of his men were invited to a traditional Samoan feast. Sam’s navigator Lou Rago later wrote:

This occasion showed his very sincere interest in people, diverse cultures and possibly how such engagements are the essence of good diplomacy.

Sam had not specialised in a warfare discipline, and was one of the few ‘salt horses’ to command a destroyer during that time. He brought to Hobart well-developed command, seamanship and shiphandling skills. In particular, Sam had a remarkable ‘seaman’s eye’ with the ability to finely judge the relative velocity of ships at sea. He also had an ability to ‘keep an eye on several simmering pots at the same time’, and was well liked by his officers and sailors for his courtesy and patience, and lucid expression of what he wanted.

Sam returned to Canberra once more. The most significant of his final three postings was, in the rank of Commodore, as Director General of the new Maritime Studies Program (DGMSP). This was a case of an officer brimming full of ideas supported by a Chief of Naval Staff, in this case the formidable Vice Admiral Michael Hudson, with an untypically keen interest in naval strategy. Sam was able to establish both the organisational structure that was to later become the Sea Power Centre Australia and provide the intellectual content and rigour for a world class organisation. Importantly, Sam was able to harness the energies of many officers and academics to produce works on contemporary and historical naval issues.

After retiring from the Navy, Sam took up the role of founding Director of the Centre of Maritime Policy (CMP) at the University of Wollongong. Very much Sam’s inspiration, CMP was established in 1994 as a joint venture between the RAN and the university, with a view to providing academic analysis and supporting training in maritime affairs. With Sam’s extensive contacts and previous maritime studies within Navy, CMP was quickly a very successful venture, starting a long-standing collaboration that continues to this day. CMP, which changed its name in 2005 to the Australian National Centre for Ocean Resources and Security (ANCORS), has educated many Navy officers over the past twenty-five years. Sam also founded the CMP’s Law of the Sea short courses, with the first being delivered during 1994. The courses remain popular and have continued since that time, even being delivered virtually during the year of COVID-19.

Sam also completed a PhD at the University of New South Wales in 2000 entitled ‘The Strategic and Political Aspects of the Law of the Sea in East Asian Seas’, much of which he wrote while CMP Director. He proved to be a prolific author, writing and editing dozens of books and academic journal articles, on a range of maritime strategic issues in East, South-East and South Asia, and remaining in great demand as a conference speaker right up to the time of his passing.

In 1999 Sam retired from the University of Wollongong, but retained an association and becoming an Honorary Professorial Fellow of the university. In retirement, he remained extremely active in academic affairs; soon after leaving Wollongong he began what proved a long and productive association with the S. Rajaratnam School of International Studies (RSIS) at Nanyang Technological University, in Singapore. Sam remained an advisor to the Maritime Security Programme at RSIS for almost two decades, splitting his time between Australia and Singapore each year. While his time in Singapore reduced over the years, Sam was still presenting seminars at RSIS in his eightieth year. 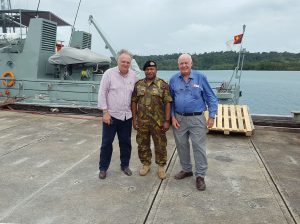 Sam Bateman on the right with colleague, Dr Anthony Bergin, and the Commanding Officer of PNGS Tarangau on Lombrum wharf, April 2017

While the study of maritime affairs remained a life-long intellectual interest for Sam, he also retained a deep love of the sea. In his final days he was taking part in his beloved annual family sailing holiday in the Whitsundays. Although not well, he had a great time ‘driving the yacht around like a destroyer and seeking out the elusive tuna’. As soon as the boat returned alongside, Sam said he needed to go to Proserpine Hospital where he died the following day.

Sam Bateman was generous in nature. His friendship and fellowship will be missed by all those who had the honour to have known him. In expressing his sadness on learning of Sam’s death, Colonel Reg Renagi, PNGDF, wrote that Sam ‘had a heart for the PNG Navy from its very humble beginnings’. Sam has left an indelible mark on the RAN and the study of maritime affairs. He also wrote a two-part article for PNG Kundu, March & June 2020 issues, titled ‘The Royal Australian Navy and the PNGDF Maritime Element’.

Sam is survived by his wife Lois, son Simon and daughters Emma and Sarah and their children.

Extract from the obituary for Commodore Sam Bateman, AM, RAN, by the president of the Australian Naval Institute, Vice Admiral Peter Jones, AO, DSC— https://navalinstitute.com.au/