Anzac Day 2021 was a momentous occasion for Warrant Officer John Irwin (‘Jock’) Wilkinson, having both recently turned 100 and met his personal goal to march on his own two feet on Anzac Day. 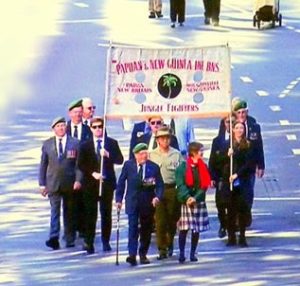 Warrant Officer Jock Wilkinson served with both the Papuan Infantry Battalion and the 2nd New Guinea Infantry Battalion during World War II. These units fought with Australian troops during the Kokoda campaign and other campaigns throughout New Guinea. In fact, it was the Papuan Infantry Battalion that opened the Kokoda campaign with the first planned ambush of Japanese troops ‘1000 yards east of Awala’ on 23 July 1942. As many readers will know, the Government of PNG later selected this date, 23 July, to commemorate Remembrance Day.

In years gone by, Jock had always reiterated his intention to march on Anzac Day when he turned 100. His fellow marchers, under the banner of the Papuan and New Guinea Infantry Battalions, admired Jock’s ability to keep the pace and to resolutely lead the contingent each year.

A stickler for good order when on the march, Jock was noted for insisting that the bands who accompanied the marchers on Anzac Day, played to a consistent beat. In 2017, during a pause in the march, Jock wheeled off to the rear of the contingent and had words to the very tall bandleader of a leading Sydney college band, about maintaining a regular beat. 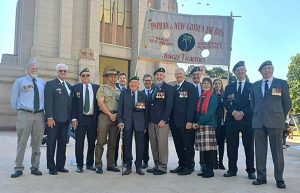 In 2021, there wasn’t a band in sight of the contingent and we marched in silence. This did enable us to hear the crowd’s applause and appreciation for Jock’s steady march.

The Anzac Day March organisers provided a Regular Army Sergeant to escort Jock along the march. While this was a thoughtful gesture, Jock completed the march without needing any assistance.

Following the march, the contingent and Jock’s family assembled at the Hyde Park Memorial for photographs and then proceeded to the Tattersall’s Club for lunch.

After the lunch, fellow marcher Peter Porteous approached some members of a pipe band, who were dining at the same venue. He asked if they knew the Regimental March of the Pacific Islands Regiment, which they did. To the amazement of fellow diners, the pipers played ‘Nut Brown Maiden’ as a tribute to Jock, who was most appreciative.

The Sydney 2021 Anzac Day March will be one that Jock and all of us will remember. 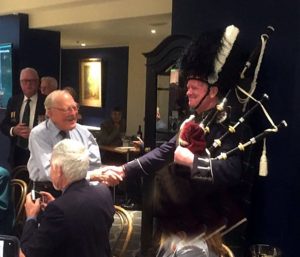 Jock thanking the pipers after they played a tribute to him.

Acknowledgements: I thank Greg Ivey, Vice President of the PIB NGIB HQ PIR Association (and PNGAA member) for assistance with both the article and photos, including those sourced from Armi Nius, the Association’s newspaper (www.soldierspng.com), as well as the ABC’s live television coverage.