As described in the previous article—in late 1963, in what was probably one of the last great patrols in the Territory of Papua—Patrol Officer Bob Hoad set out to explore the country east of the Strickland River, north of Mount Bosavi and into the western part of the then Southern Highlands District.

It returned via the Lavani Valley and had to cross many unbridged rivers and streams, tributaries of the upper Strickland. The main purpose was to ascertain just what populations might still be uncontacted in that remote area and inform those people of the government’s intentions.

The full formal Patrol Report (Nomad Patrol No. 4/1963-64) is available on-line at the University of California San Diego Library. Unfortunately, none of patrol leader’s excellent photographic skills appeared to be possible to download a useful reproduction—I believe that most, if not all, of the original images have long since vanished from the original report, held in the PNG Archives!

The patrol was actually conducted in two stages. The first, from 16 September 1963 to 10 October 1963 was to make contact with various groups north of Nomad and east of the Strickland. It was also hoped to get some idea of the terrain through which the patrol would eventually return from the Highlands.

Hoad had to break the patrol in order to be at Nomad to prepare for a visit by then Minister for Territories, Paul Hasluck, on 17 October and then be on standby for the first landing of a DC3 which took place on 25 October. He then awaited the availability of a chartered light-aircraft to conduct an aerial reconnaissance over the rest of the planned patrol route. The second stage commenced on 13 November, 1963 and headed east through Biami territory, thence north-east and north to the Tari Basin. It then headed back west, thence in a southerly direction, finally arriving back in Nomad on 12 February 1964.

On 24 December Hoad was joined by Mickey Rarua, a young Papuan Assistant Patrol Officer. Rarua, recently posted to Nomad for training and experience, had expressed a desire to join Hoad for the walk to Tari and, with a suitable escort, managed to catch up with the patrol in two days’ hard walking from Nomad.

Much attention has earlier been given to patrols which headed into the Star Mountains north of Kiunga. The first of these was Ivan Champion’s patrol from the Fly to the Sepik in 1927. In April 1942 an epic evacuation from the invading Japanese used the route (mapped by Champion) after fleeing inland from the Wewak area. Eight Europeans and eighty-two Papua New Guineans, led by prospector JH Thurston endured five months of privations to reach the safety of Daru.

Several patrols from Daru/Kiunga headed for the Stars after the interruption of World War II. Two of them reached Telefomin before returning. However, the area to the east, which Hoad patrolled, had only been briefly penetrated by a few patrols out of Lake Murray/Kiunga to the west and Lake Kutubu to the east.

In 1954 an Australian Petroleum Company (APC) geological exploration party, escorted by Assistant District Officer Des Clancy, walked from Lake Kutubu to the Strickland and thence to Kiunga. This patrol became famous at the time due to its ‘discovery’ of the Lavani Valley—dubbed ‘the new Shangri-la’ by the Australian Press.

These patrols had little success in contacting any people—let alone bringing them under government influence. Mostly the people ran away and hid or shouted abuse and made threats from a distance, urging the intruders to move on. In fact, it was due to an attack on a patrol led by McBride in 1959 that led to the decision to establish a patrol post at Nomad. Assigned this task was Mal Land. Hoad took over from him and sometimes had the company of other officers such as Ian Douglas.

First, basic buildings (bush material) for a permanent patrol post were constructed. These included the kiaps’ house and police housing, an office, a government storehouse, a large building to accommodate visitors from outlying villages as their confidence rose and, of course, a ‘haus kalabus’. With the completion of the airstrip in 1963, Hoad was in a position to commence patrols of ‘consolidation’, extending far out from his station.

The earlier patrols merely ‘penetrated’ the vast area west of Mount Bosavi or, in the case of APC, ‘walked through it’. Hoad’s patrol took a great circle route and spent much time camped in sparsely-populated areas checking on the people’s connections with each other and attempting to establish the names of the various groups and their languages. Also attempted was explaining the reason for the patrol’s presence, making known the establishment of a permanent patrol post and what the aims of the administration were.

To give some idea of the intense demands of patrol work in those days, Hoad was again off into the bush the day after his return to spend a further six days chasing down a group of Kubo men who had broken into the government store during his absence and stolen all the axes. Then, on 14 February 1964 Hoad departed on Patrol No. 5/63–64 to spend twenty-four days conducting the census for the first House of Assembly National Elections through the Pare area. 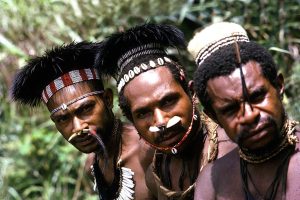 Men of the Star Mountains

Of course, with the airstrip built and no other services to attend to at Nomad (it lacked any schools, aid posts, post office or bank agencies, etc.) there was not a lot to do on a remote outpost during its formative years! The main agenda was to establish law and order, bring peace to the area and cut out tribal fighting and ‘payback’ killings. Such was essential before other services such as health, education and agricultural extension could be offered to the people. This could only be achieved by extensive patrolling.

Editor’s Note: All the photographs courtesy of Bob Hoad, detailed descriptions of the patrols before and after Bob Hoad’s can be accessed in the e-book, Taim Bipo, on the Association website.