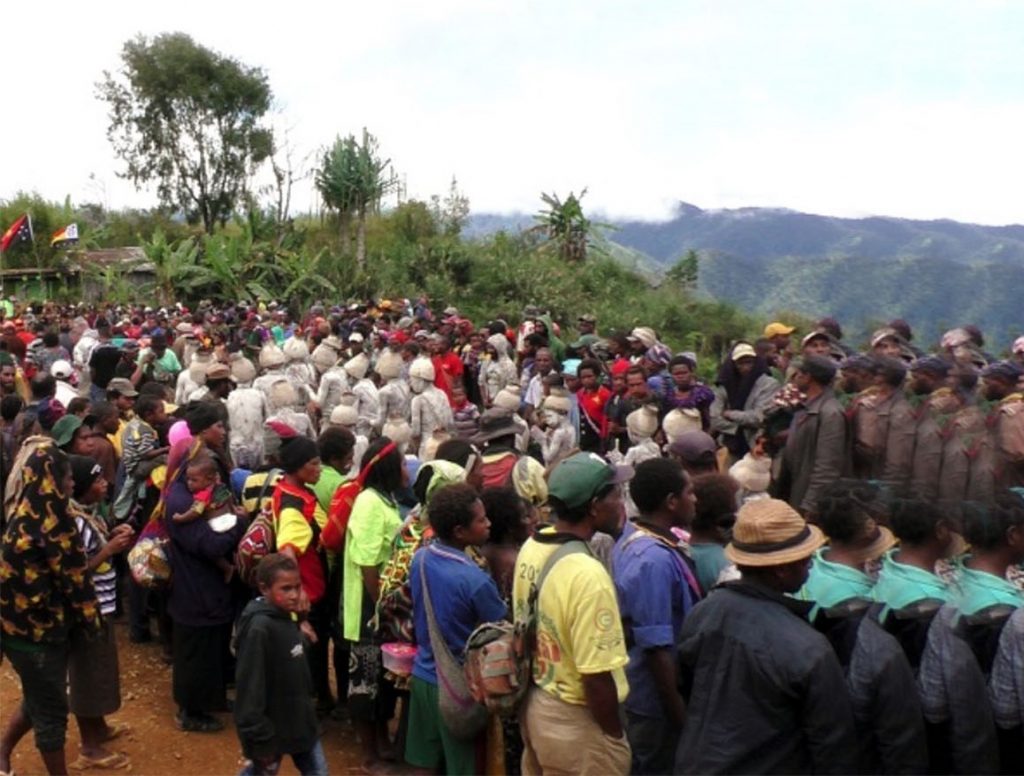 Opening of the Snow Pass Eco-Lodge in Bundi in 2017; One of the Imuri fire dancers of Karizokara (Courtesy Cookie Piksa)

Often called ‘The Land of Handred Mauntens’, Bundi, which occupies the central most scenic part of the Bismarck Range, is indeed a hidden jewel for cultural tourism in Papua New Guinea. Sharing borders with Jimi, to the west, Gembogl, to the south, Asaro, to the east and the majestic Ramu plains to the north, Bundi boasts some of the most exotic traditions of Papua New Guinea that are yet to be exposed to the world.

On the evening of Friday, 25 August, I was reading in my little mountain cabin when the sounds of distant kundu drums and bamboo beats echoed up from the valley. Five sing-sing groups from Upper Bundi that were to take part at a mini cultural show the next day were rehearsing. I could sense that the drums and beats were handled with

a slightly higher degree of excitement for what would be the first-ever Snow Pass culture show. Gentle raindrops did nothing to dim the celebration. As night deepened, the accompanying slight wind intensified the coolness over the valleys and mountaintops. When the drumbeats faded to nothing, silence and darkness enveloped everything. All was quiet. The valley was asleep.

The next morning was glorious. The sun rose to clear the fluffy white clouds. Its warmth melted the fresh morning dew on the surface of the mountains. Activity was heightening around the main arena and excitement was everywhere. The big day was here. Dancing groups had prepared for weeks. Those who weren’t on the dancing teams were also animated.

It was time to meet and greet. But most importantly, it was an occasion to see and exhibit the sacred dances that had been handed down for generations. People from the surrounding villages started flooding in for the show. Our guests arrived on a white trooper just as the midday fog was closing in on the valley like mellifluous white bed sheets.

Suddenly, in a well-choreographed fashion, flames flared from the white clay pots that donned the heads of the Imuri fire dancers of Karizokara as they set about welcoming the entourage. The amazing ghost-like figures were the heart of the show. Occasionally, they seemed hidden amid the sweeping white fog as they escorted the guests to the centre of the show ground.

The moment was surreal.

Vincent Kumura is founder of the Kumura Foundation and managing director of the Snow Pass Eco-Lodge. He received the 2016
Digicel PNG Foundation Men of Honour Community Ingenuity Award.

Extract from an article in The National Weekender, Sept. 2017