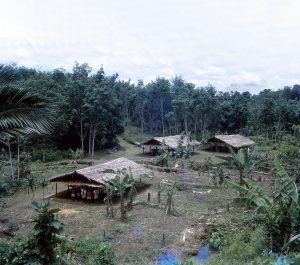 On transfer from Kandrian (West New Britain District), and after visiting Regional Office (Syd Saville was Regional Rural Development Officer (RRDO), followed by Fred Kleckham and Mick Belfield) and Konedobu HQ in Port Moresby, on 13 October 1970 I flew by DC3 to Daru, District HQ for the Western District, Papua Region.

On 15 October I flew for I hr 15 min in an Aztec charter to my new posting at Kiunga, a small government outpost situated by the Fly River and only about 100 ft (30 m) ASL.

Some 250 miles (400 km) by air, it is twice that distance by boat due to the flat nature of the marshy landscape and resultant meandering of the Fly River. A year later I had occasion to travel from Daru to Kiunga on the MV Anzana. Stopping at night, midst zillions of mosquitoes, the trip took five days.

Rubber was the main cash crop in the Kiunga SD. The first rubber stumps were planted in 1965 under the supervision of George Greenwood (refer Una Voce, March 2011). Plantings were increased under the management of Rural Development Officer (RDO) John Serjeantson. Upon arrival I did a handover-takeover from Assistant Rural Development Officer (ARDO) Mota Varago. John returned shortly after leave to show me the ropes. (He had graduated a year ahead of me at Wagga Agricultural College, NSW).

Together we patrolled much of the rubber-growing territory, travelling at times in the government workboat MV Emerald, at others in the DASF de Havilland river truck—a flat-bottomed vessel about 18 ft (5.3 m) long, propelled usually by a 35 hp Mercury outboard, and ideal for ferrying loads of rubber stumps and navigating the numerous small streams to reach villages. We also had use of a 14 ft Tradewind dinghy from pool with a 20 hp outboard. Motorised, long dugout canoes were the mode of travel on water until quite recently. 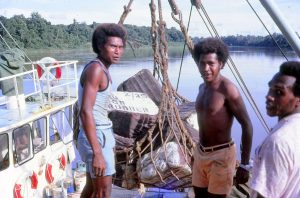 For extracurricular activity John got me up on a pair of water skis. The river truck wasn’t particularly fast and I barely managed to stay upright on the Fly River with its swift flow and eddies. We ventured inside a billabong. I fell off frequently as he swerved around bushes and I mostly failed to follow in his wake. We laughed so much that I often submerged. John departed for a Madang posting early in December.

Weeks following his departure I took a spotlight and checked out this billabong. Yep—numerous crocs were watching … the salty variety. Afterwards, when travelling the waterways in daylight, it was not uncommon to see them sunning themselves. Higher numbers were visible at night. We ranged alongside the odd swimmer longer than the river truck and quickly veered away. To sustain mature croc numbers, the maximum belly width of saleable skins was a designated 20 in (50 cm). We potted the odd animal, shotgun with .22 backup in case the cartridge was a dud, but no longer than about 8 ft (2.5 m). Villagers skinned and retained the carcasses and I sold the skins in Daru, which paid for fuel. The meat was an occasional, tasty supplement when away on patrol, often for weeks at a time. 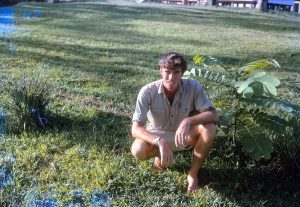 The furthest rubber block villages were reached eight hours south, downriver by river truck, at Membok, adjacent to the Binge River, a Fly tributary. That was with an extra engine. Karemgu was just an hour’s walk further on. Transporting a load of rubber stumps was a much slower story. Fuel for the return journey upstream was offloaded at D’Albertis Junction (Fly and Ok Tedi confluence), and Erekta on the downward leg. We ran low on fuel only once on this trip and four of us paddled down the Binge River to Kukujaba for seven hours one day to conserve reserves for the upstream section on the Fly.

Membok village conjures up a memory, too, of being chased. Along with the two staff members with me on patrol, as we ventured out to hunt up tea. I was ahead on the narrow walking track through dense rainforest scouting for pigeon when suddenly the staff raced past shouting ‘Snek!’ (Snake!) A thrill a second, for chasing perhaps thirty metres behind was a sizeable Papuan Black snake. I hared off after my two assistants, pretty nimbly being barefooted. It was with some trepidation when sometime later we retraced steps to our canoe.

Fortunately, the majority of villages involved in the rubber scheme were located within half that travel time by water. DASF staff spent approximately 40 patrols per year of average one-week duration working on these six-acre (2.4 ha) smallholder rubber blocks. Further nurseries were established, stumps distributed and new blocks surveyed for the owners to clear, particularly along the Ok Mart, a tributary of the lower Ok Tedi, as far as Senamrae village.

In July 1971 I attended a rubber production in-service training course conducted by regional rubber adviser Chris Arnold, at Mageri near Sogeri some twenty-five miles (forty km) inland from Port Moresby. RDO Peter Thompson, OIC Department of Agriculture Stock and Fisheries (DASF), Balimo was another attendee from the Western District. Accommodation for participants was at the Rouna Falls Hotel, frequented by many expats in those days. At course conclusion we knew how to implement smallholder rubber processing. 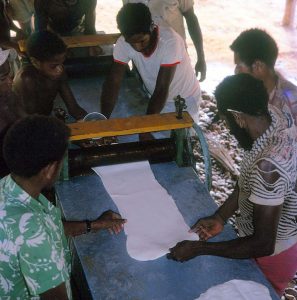 So I had the privilege of overseeing the first rubber processed in the Kiunga SD. This was at Drimdemasuk village, forty minutes upstream from the station. Initially, twelve blocks were tapped. Three bush material ‘factories’ and a smokehouse were constructed, the former housing rollers on benches. Processing equipment was purchased through the PNG Development Bank. Yours truly had the unenviable task of filling out the requisite application forms and, ultimately, the farm progress reports for each block. The first rubber sheets were produced in February 1972. Processing next commenced at Tumindemasuk and Mepu villages.

Smoked rubber sheets were formed into 100 lb (45 kg) bales which were transported to Kiunga by river truck or village canoe, then purchased by DASF and shipped out to Port Moresby for on-forwarding to Australia. A fascinating process all up and never did I imagine in my years growing up on a sheep/wheat farm at Harden in NSW would I one day be tapping rubber trees.

At the conclusion of my Kiunga posting, rubber blocks were present in thirty-eight villages, involved 581 growers, and totalled 1,900 acres planted, which included 176 acres mostly replanted following the 1972 bushfires.

Part Four of this series will be published in a following issue of PNG Kundu.