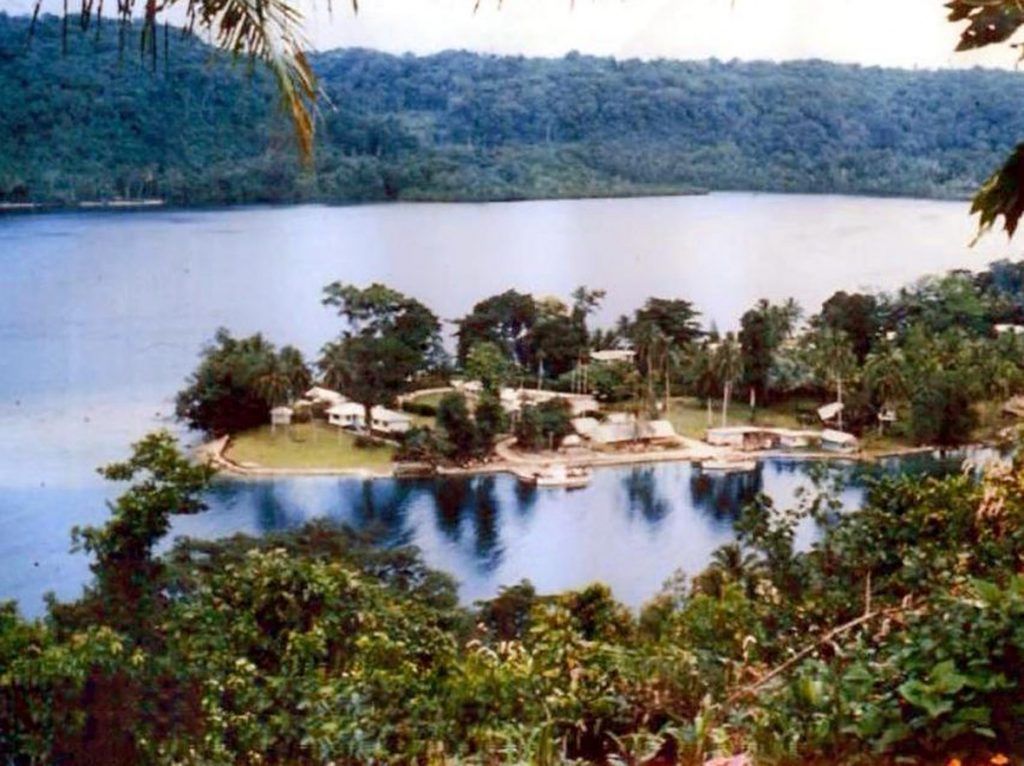 Kandrian Station, a small outpost on the south-west coast of West New Britain.

I arrived there on 21 November 1967 from Talasea, where I had spent five months in introductory work under the tutelage of Jack Curran. The District Agricultural Officer was Mick Mead, based in Cape Hoskins, later Kimbe, who later transferred to the expanding new oil palm industry there. He was replaced by Mark Jones.

DJ Kingston, Don Sheppard and Eric Wilson were in Islands Regional HQ, Rabaul. The Director of the Department of Agriculture, Stock and Fisheries (DASF) in Konedobu was Bill Conroy.

My predecessor as OIC DASF at Kandrian was Neil Alcorn, but he’d departed some five years prior to my arrival.

Kandrian Sub-district had a population of 16,000 spread over 6,700 square kilometres and covered 320 kilometres of coastline.

Permanently-based expatriate government employees at Kandrian and their spouses numbered about a dozen on average. The ADC upon my arrival was Peter O’Sullivan, followed by Col Campbell, and later Peter Sisley who was present when I was transferred on 9 October 1970.

There were perhaps 50 kilometres (30 miles) of dirt/koronas (crushed coral) roadway in the Kandrian area, the longest stretch some 30 kilometres heading north-west through Pomugu and Senemsi villages to the Alimbit River, though during the wet (March to October) some of this was cut off. Average annual rainfall for Kandrian was 4,064mm (160″). Gasmata, to the east, received 5,000mm+ (200″+). Weather permitting, DC3s called in to Kandrian from Lae on Thursdays and Rabaul on Tuesdays. The BP-owned MV Kirwina made a run along the South Coast every six weeks and the MV Manugoro every fortnight. Locally berthed government and private workboats included MVs Garua, Langu, Aliwa and Aimara. I would use one of these vessels for passage to a drop-off point, on coastal patrol work especially.

One particular event I will mention was the Passismanua Patrol crop census and orientation, January 1968. The Passismanua Census Division (CD) is an area of some 1,243 square kilometres (480 square miles) north-east of Kandrian and home to the Kaulong and Senseng groups of people (population 3,225 in 1969). Unique customs practised here included head-binding for beautification (then recently outlawed) and blowpipes for hunting. There were no known poisonous land snakes, but pythons grew to a large size in the thick rainforest habitat.

Two agricultural assistants and I were dropped off at Pomugu village by Landrover, eight kilometres (five miles) north of Kandrian. We arranged sixteen carriers for our gear and set off walking. 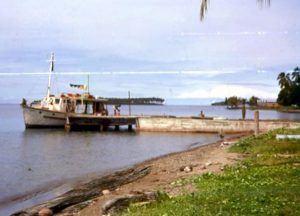 Tracks were slippery, full of boggy holes and glutinous mud. Numerous streams had to be crossed, and ‘bridges’ ranged from some rickety bamboo poles, strung loosely together, to large fallen tree trunks, most covered in moss because very little, if any, sunlight filtered through the tall canopy. Leeches were flicked off as necessary, sometimes soaped. Even with precautions I still often washed bloodied socks at the end of the day’s bushwalk. Through the carriers I learned that leeches sometimes fell from the overhead growth and small ones occasionally attached to an eye and caused blindness. I saw some of these results. Venturing further into the Whiteman Ranges, to reach villages such as Lakungkung and Arihi, the tracks increased in ruggedness, crossing one limestone ridge after another.

It paid to be fit and I must add I didn’t catch malaria, probably thanks to chloroquine-based suppressives taken for ten years.

In ten days we visited twenty-seven villages, with populations of between thirty-four and 135, average seventy-three, total 1,981. Coconuts and coffee were counted. We conversed (in Tok Pisin) with the luluai and tultul (village chief and assistant) of many villages and they would present their village book for our recording anything of import during our stay. It was interesting to read of previous patrol visits. Neil Alcorn’s walking times were similar to mine. He had planted lemon groves beside some villages and I made much use of lemon juice in black tea and on kindams (fresh water shrimps).

The soil of the region was not particularly fertile. New gardens had to be established just after one or two plantings, and as these were established further from a village the villagers themselves would live in their gardens for longer periods, hence a village might be empty of people. In perhaps ten–fifteen years or so the village itself might be relocated.

One day I turned a corner in the track and an adult cassowary stepped out of the bush into my path not 30 metres ahead. Both of us were very surprised! It quickly vanished into the bush on the other side.

Passing through Angelek village in less taxing topography, about 18 kilometres (11 miles) and three hours walk out from Kandrian on our way home, I conversed with American anthropologist Jane C Goodale, residing there on another study of the Kaulong people. 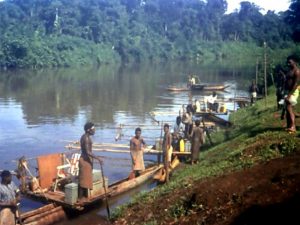 At Urin village on the Ilak River

Back at the station I wished I had a clerk to assist with all the office duties: work management for nine Rural Development Assistants (RDAs) and fifteen Farmer Trainees (FTs), purchasing locally produced robusta coffee parchment (which was on-forwarded to Rabaul for shipment to Australia) and the establishment of an agricultural extension station, ‘Nairlo’—the latter on top of the plateau between the airstrip and Turuk Roman Catholic mission. The inland road to Pomugu, Angelek and onwards dissected it. An office, store and fourteen-bed FT dormitory were the first built. Until my arrival, RDA Bernard ToParagia was in charge and performed office duties in his house at the old agricultural station, ‘Aringi’. This was located two miles from the sub-district office (SDO) and past the vocational centre. We moved the files to my house in the interim and I typed at the SDO until a DASF typewriter arrived six months later.

Who could forget the fun times and hair-raising moments! The time when four of us rode our motorbikes for a 15-mile (24 km) fun ride out to Senemsi village, not far from the Alimbit River. The MV Kirwina’s engineer was on his Yamaha, the rest on government Hondas, 90cc and mine 175cc. Along a particularly rocky stretch we all came off! No helmets, some bark lost, lots of laughter. Then, back to the club to recuperate.

Part Two will be published in the next issue