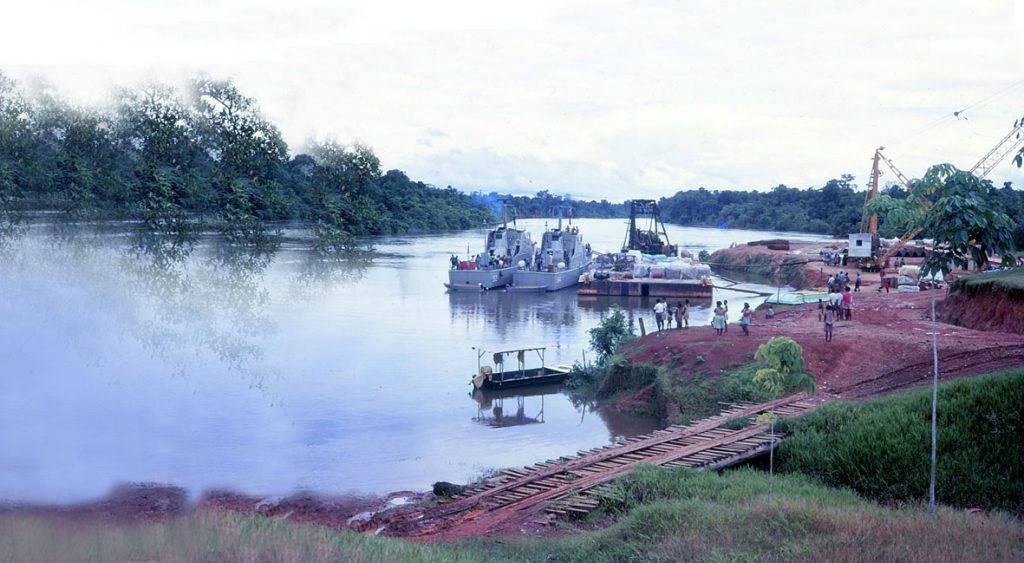 The northern section of the Kiunga Sub District (SD) rises up from 100 feet above sea level at Kiunga to 12,000 ft (3,700m) along the Star Mountains. Pilots told me snow was visible across the West Irian border. Mt Fubilan is located in this range, the site of the Ok Tedi mine.

Discovered by Kennecott Copper Corporation in 1968, mining started in 1984. I had a staff member stationed at the Ok Tedi campsite for the sole purpose of growing vegetables for the mining camp.

or so annually—that bush material roofs had to be fixed over the garden beds to stop them washing away. Camp superintendent Doug Fishbourne was considering concrete walls and permanent material roofing for the gardens.

Helicopter rides following the Ok Tedi north from Ningerum for twenty minutes to Tabubil were entertaining in cloudy conditions.

In step with the developing mine, plans for change were being made for Kiunga. The Department of Agriculture, Stock and Fisheries (DASF) was to move out of town, so the development of Samungos extension station was commenced on twenty-five acres selected three miles north alongside the dirt roadway to Rumginae. In March 1973 DASF surveyed an extra fifty acres to extend the station boundary further in from the road.

From a river truck, DASF staff would occasionally set a gill net late evening and next morning fetch home, on average, ten barramundi weighing 8 lb (3.6kg) each. These were distributed to staff and other Kiunga residents. An infrequent sawfish was netted; most of these left gaping holes to be mended. In October 1971 I met marine biologist Ray Moore in Daru and I was able to tag and release ninety-nine barramundi for him in the Kiunga SD.

We airfreighted in 500 day-old White Leghorn chickens from Ilimo Farm, Port Moresby, via Daru. For starters, 200 went to the local government council (LGC) to raise and sell to villagers, with more to follow as required.

Eggs from Daru cost $0.95 per dozen plus $0.52 air freight. We provided eggs to our staff and sold to station personnel and mining camps for $0.80, so all were happy. Income paid for laying mash from Port Moresby, sometimes shipped in on the MV Pera. The rest of the layers’ diet was sweet potato leaves and most eggs were double-yolkers. There was one rooster. He won ‘Best Rooster’ at the 1972 Daru Show.

Some years the low rainfall to the north resulted in a prolonged lowering of the Fly and tributaries. Once, in the river truck, we overshot the Binge River entrance to the Fly and pulled up five miles further south at the old Mabaduan village site. The only inhabitant present was a trussed-up 2 m crocodile. We backtracked. The Binge was now a mere creek.

During such periods of low water level, locals would wade, rather than paddle, across the Fly at Kiunga. Not for me. However, the appearance of numerous sandbars was an attraction for turtles. Upstream at night some staff and I would watch them in the sand commencing their mode of incubation, or in the daytime locate eggs by poking a stick into the sand. I preferred the hard-shelled eggs back at base.

Occasionally, but usually on patrol, we would resort to hand line fishing. Casting with a spinner down the Ok Mart from a drifting river truck was most productive. Black and white striped fish up to 1 lb were delicious cooked on hot coals on a sandbar. Nearer the station, and from the Fly, we would land catfish and file snakes, but our lines of 30 lb breaking strain were sometimes snapped. Then, during a visit, my brother caught a 14 lb (6 kg) Papua Black Bass—a real fighter! 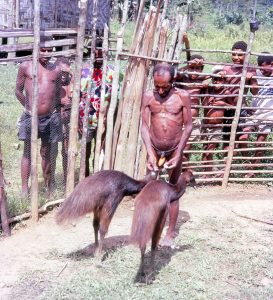 About 8 miles (13 km) downstream from Kiunga there was a submerged rock bar and a river depth over this of less than 2 m resulted in larger vessels, such as the supply barge Ame Rupa (some 80 ft or 25 m long), stopping here and goods on board being ferried up to the station in smaller craft. Once Brian and I had back orders of SP beer on board, so thirty cartons arrived all at once. It was a happy new year!

Soon after I arrived in Kiunga I practically forsook footwear there. Just walking up the clayey mud river- bank increased the size of my boots appreciably and station roads bore similar results, where just walking two km to watch a movie at Kennecott’s camp beside the airstrip was a tasking exercise.

There was a paucity of domestic staff available locally, so my days off on station included stirring up the copper out back for the weekly clothes wash or topping up the kerosene tank in the fridge. Rarely I’d receive a windfall of a still partly full 44 g drum of avgas, surplus needs to a DASF helicopter charter. This also fuelled the fridge. Reading, letter writing and listening to transistor radio or Akai reel-to-reel portable tape recorder filled in much leisure time.

One morning as I walked downhill to the DASF bush-material-with-iron-roof office, a couple of prisoners in red laplaps, with accompanying policeman, passed me by on their way to cut station grass. The staff member with me started to grin. Asked what was up, he answered that they were possibly sizing up my legs. They were ‘in’ for cannibalism. Aagh! Interesting times.

Another noteworthy event, from my Field Officer’s Journal, December 1971:  Borrowed 35HP outboard motor from Kennecott Construction Company—visited Drimdemasuk to show Cr Menumgrup from Grehorsorae village in the Ningerum LGC area the rubber factories now in process of construction. Reason: because a man from Grehorsorae had just been gaoled for spreading a story that Kiunga rubber was no good unless the Rural Development Office (RDO) was killed and his blood mixed with the latex! (He was sentenced for six weeks.)

Station outboard motors were worked hard in the main and required much maintenance. They still broke down on patrol. Once, on the Elevala River, the prop fell off. It was retrieved, but not the nut.

The former was satisfactorily affixed using spark plug washers. At other times an internal problem could not be rectified on the water, which meant usually paddling to the nearest village and sending word to the station for backup.

I was indebted to Fr Benedict at the Montford Catholic Mission for the use of their puller for flywheel removal, and so one night when the Assistant District Commissioner (ADC) rocked up in his Land Cruiser wagon to pick up Kiap Murray and informed us of trouble at said mission, I didn’t hesitate to jump in. Apparently, a deranged bloke had run amok and was causing much civil unrest. The mission was located between the station and airstrip.

With moonlight assisting us we spotted the hostile subject approaching us down a small track and we hot-footed it back to the vehicle. He followed us to the airstrip, shouting and gesticulating wildly, where, with room to manoeuvre, we turned 180 degrees and from about 60 m transfixed him in our headlights. That’s when we saw him raise a bow and arrow …!

Whump! … the sound of three policemen in the back with us hitting the floor. That left Brian and me on top … far too slow. Then we watched someone move in behind the perpetrator and pin him in a hug. Brian and I, with little choice, were first out, raced up and had grabbed an arm each, when whump again, and crash! The police came down on top of us and we all went down in the maul. Wow! Nobody hurt in the [farcical] scenario, although two arrows stuck out of the radiator with contents slowly leaking.

On 23 March 1973 I flew out on long service leave, handing over to Assistant Rural Development Officer (ARDO) Jeffrey Kaiowai, who was later relieved by RDO Graham Preston.