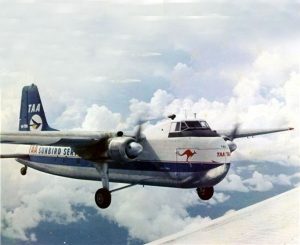 In 1948 the Pakistan Air Force ordered a batch of Bristol Brigand fighter-bombers from the UK, but then cancelled the order. The British refused to cancel but substituted Bristol Freighters (B170s) in the contract. Pakistan did not want these strange aircraft, but eventually seventy-one Freighters were ferried from England to Pakistan. Apparently, they provided satisfactory service for their Air Force.

In 1959 the Australian Government decided to replace Qantas in TPNG with the domestic airline, TAA, which would take over all passenger and freight flights. At that time the largest aircraft Qantas had in TPNG were Douglas DC3s. TAA realised that a larger aircraft was needed to move the heavy cargo expected to be carried in TPNG in the near future.

Ansett Airlines (operating as Mandated Airlines- MAL) were also flying in TPNG in opposition to Qantas. It was decided that TAA and MAL, as competing freight carriers, would make a joint purchase from Pakistan of seven surplus Bristol Freighters. Australian crews flew these to Australia in 1961—three for MAL and four for TAA. After arrival, selected aircraft were serviced by their respective airlines and then flown to TPNG. TAA planned to use two in TPNG and to retain two in Australia for replacement parts.

Some upgrades were completed in Australia by TAA to improve the safety of operations in TPNG. One major change was to replace the Bristol brakes (typically English, unreliable, air activated bag brakes) with DC6 hydraulic brakes. TAA fitted a converter which turned the original air pressure brakes into hydraulic pressure. The original air brakes had already failed dangerously during a training flight at Mangalore airport.

Captain Ivan Neil told a hair-raising story of this brake bag failure. When the aircraft first arrived in Melbourne, Ivan was one of two captains being endorsed on the type by a senior TAA check pilot. During this training at Mangalore, the other trainee was in the captain’s seat doing circuits and landings and Ivan decided to watch a landing by lying down below on the floor of the cargo hold and looking through the Perspex panel fitted into the lower part of the door. After a smooth touch down, the brakes were applied and the pressure bag in one wheel brake failed. Ivan hung on to the floor as well as he could while the aircraft turned left, ran off the edge of the runway then was steered, by rudder, back onto the hard stuff. Ivan said he would never go down there again …

The TAA Bristol Freighters commenced their flights in TPNG in 1961; VH-TBB in June, and VH-TBA in September. Their large load capacity was needed because the Administration began constructing a road from Lae to Mt Hagen in the Highlands. For the project they needed trucks, bridge girders, bulldozers, tractors, graders and similar gear which could only reach the Highlands in an aircraft as large as the Bristol.

On different occasions I flew complete D4 Caterpillar tractors, a road grader, stripped of its engine, but complete with the blade still attached, and trucks into the Highlands. All these were unloaded onto our portable ramps at destination. When carrying trucks, the wheels were often removed and they were rolled in on their brake drums. This lowered the truck so it could be moved far enough into the hull to enable shutting the door. Our cargo staff became quite versatile at finding solutions to loading difficulties.

When all necessary work was completed the aircraft flew to Lae to commence freight operations. TAA decided that the first flight in TPNG would be celebrated by inviting local dignitaries to watch the first scheduled flight. At the insistence of TAA management, Captain Neal left on this flight in very marginal weather conditions. Immediately he departed the tower declared ‘Lae airport is closed to all operations’.  Shortly after, on climb out, one engine failed and had to be shut down. Captain Neil advised by radio, ‘Returning to land at Lae’. The tower told him the airport was closed and his reply was ‘Well, I am just about to re-open it’. This was typical of Ivan’s positive approach as a captain. All ended well with the dignitaries observing the Bristol’s single engine performance.

The Bristols operated from Madang, the centre for freight transfer into the interior of TPNG. The airport was close to the cargo wharf and within a short flight to Highlands airstrips. It had a single, sealed bitumen runway for all departures and arrivals. Most of the Highlands airstrips we used were either loose dirt or grass—very slippery when wet. Many strips were one-way operations: land uphill and then take off in the reverse direction, downhill.

TAA pilots flying the Bristol in TPNG usually completed a ground theory course in Australia before their posting. Flight training for the endorsement was conducted in Madang. Those pilots converting to the Bristol soon appreciated the suitability of this aircraft to carry freight. It was easy to load and unload, and the power/weight ratio was superior to the DC3s making it much safer to fly in marginal conditions.

The large Bristol Hercules sleeve valve engines were powerful and rather more complex to handle than the DC3’s Pratt and Whitney engines. The first flight of the day required a long idling period to raise the temperature of the thick engine oil to a satisfactory viscosity. For engine starts at high-altitude strips, priming of the fuel system was radically different to the procedure used at sea level. Also, we could not rely on the aircraft petrol gauges. After refuelling, the small quantity of fuel we carried could only be guaranteed if each tank total was measured by hand with a wooden dip stick. This task fell to our young First Officers (FOs). 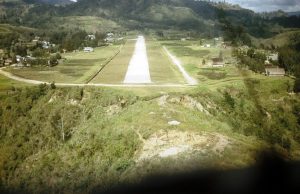 After each refuel at Madang, the FO would climb past the radio rack behind the crew seats, open a hatch and climb out on top of the fuselage. Then it was a dangerous walk along the top of the wings to reach the fuel caps and check the quantity of petrol with the dip stick. Looking into the large wing tanks the amount of fuel in the bottom always seemed tiny. There was a very real danger of slipping off the wing or the fuselage top. This was in 1963—today’s health and safety requirements would not allow it.

Our engineers coped very well with their job of keeping the Bristols flying with minimal equipment. Most daily maintenance was done in the hot sun, with no shade. They even kept spanners cool in a bucket of water while working outside.

We had many serviceability problems the designers did not anticipate. For one, the tail wheel had an electric solenoid lock that was released for taxiing; before take-off it was locked to keep the aircraft straight on the runway. When operating on wet grass strips in the Highlands, mud would cover the solenoid. During the flight back to Madang the mud would solidify, so sometimes after landing the electric solenoid’s power was not enough to withdraw the lock and enable us to swing the tail to taxi. This meant the aircraft stayed on the runway while the FO exited by the top hatch, walked down the fuselage and jumped off at the tail, He then lay on the ground with the aircraft fire axe and hammered the locking pin to loosen the mud. 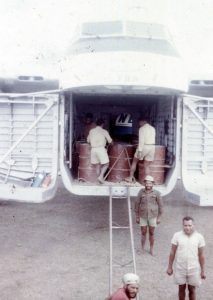 Completion of the road to Mt Hagen reduced the quantity of heavy air freight required to be carried from Madang into Goroka, Mt Hagen, Minj, Banz, Baiyer River and the other major towns. We removed the need for B170s by lifting all that heavy gear into the Highlands. The transport system could now run without us.

Finally, in 1967 after five years of intensive work in TPNG, TAA removed the Bristols and sold them in Australia to Air Express. Of our two Madang-based aircraft, VH-TBB continued flying with Air Express and VH-TBA was stripped for spares in Brisbane.

I acknowledge the help of many TAA colleagues in writing this story.