and in my letter home:

‘a full charter, 1050 lbs to shift myself, native house boy and stores’

Climbing first up and through the Asolaka Gap and then at low level to touch down on the Kundiawa airstrip some 20 minutes or so later.

To put the flight time in perspective, it took up to four hours by Land Rover from Goroka on a developmental road up and over Daulo Pass, which eventually became the Highlands Highway, connecting Lae with Mt Hagen.

The Kundiawa airstrip was literally carved out from the side of a mountain and had a grass surface. There was one way in, facing a mountain and one way out, with a precipitous drop of a couple of hundred feet at the southern end. The DH84 was a marvelous little aircraft. Fabric covered with wooden superstructure; twin Fox Moth engines with wooden propellers. With a payload of a little over 1000 lbs, an altitude of 5000 to 6000 ft above sea level was just about their limit.

Based at Kundiawa my area of responsibility was bounded by Chuave in the east, Kerowagi in the west, Gumine generally south and the Upper Chimbu valley to Keglsugl in the north. A fascinating area in which to work; the women industrious and intelligent food producers supported, to some degree, by their menfolk – when not fighting with neighbouring clans!

My Beeza Bantam 175 cc was an important ancillary to the extension work. Radiating from some of the Administration centres ‘bench’ roads were constructed, more or less, on the contour. Over nearly 60 years these benches became roads. With some reservations, using the motorbike made life somewhat easier. Watercourses, of varying depths, were negotiated with the bike slung between two poles, carried by local villagers who appeared miraculously as soon as they heard the noise of the motorbike.

On one occasion I arranged for the faithful DH84 to call and went down to meet the plane at the airstrip with houseboy, patrol box and motorbike. The pilot was not expecting a motorbike! Explaining it was essential to do what I had to do at the other end, we did a weight calculation and he agreed to take the load. Lifting into and stabilizing a motorbike in a DH84 is no mean feat. As an afterthought, the pilot asked if there was petrol in the bike’s fuel tank. It was necessary to explain that where I was going there was little likelihood of petrol! We lumbered off the Kundiawa strip gaining height flying up the river below.

Many long motorbike day trips were made to Chuave Patrol Post with an occasional overnight stay. The native coffee industry was fast developing on the back of the European settlements either side of Goroka.

Orm Mathieson was the Assistant District Officer at the time of my posting to Kundiawa. On one occasion he and the station Patrol Officers, Liebfeldt and Alder, were away. As the only Administration officer present I was responsible for making the early morning radio ‘sked’ – principally a weather report to assist aircraft entering or leaving the Whagi Valley. On the first morning I walked up to the Sub-District office and there, at the foot of the steps, was a semi clad female Chimbu woman with her head partly cleaved open and very deceased! I called for the Police Sergeant and asked him to arrange to remove the body and advise the woman’s clan members that the matter would be dealt with on the return of Magistrate Mathieson. 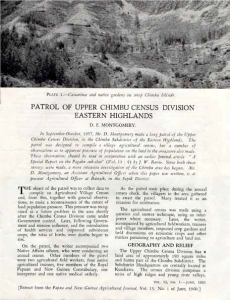 I reported the murder by radio to Goroka and the weather report followed.

In September an extensive patrol was undertaken into the Upper Chimbu Valley. The full report, Patrol of Upper Chimbu Census Division Eastern Highlands, was published in the Papua New Guinea Agricultural Journal Vol 13 No.1 June 1960 and can be viewed on the Association website – www. pngaa.net

24 September: As reported in my Field Officers Journal the patrol in the company of Patrol Officers Liebfeldt and Alder departed 1pm from Kundiawa – 4800 ft – arriving at the village of Kou – 6250 ft – at 3pm. This was the pattern over several weeks as we moved through altitudes varying as much as 2000ft each day travelling up the valley and on the return down the valley.

8 October: Arrived Waimambuno rest house – 7,400 ft – at 11:30 am and that afternoon visited the Catholic Mission Station.

9 October: From a letter home: ‘We left the Mission at 9:00 am to make our base camp at Lake PIUNDE, at 11,400ft, the lower of two lakes at the base of Mt Wilhelm. These lakes, each about 2 miles in circumference, seemingly bottomless, with a magnificent waterfall, cascading from the top lake, AUNDE, to the lower lake. By 3pm the temperature had dropped to 42 deg.F – 10 above freezing! We tried to keep warm but did not light a fire for the fear of setting the 4ft grass hut alight.

At 5.30am we woke to a beautiful cloudless day; the rising sun; the valley stretching out below and stark Mt Wilhelm registering the dawn above us. The scene was almost beyond description. We left camp at 6.30 for the summit. Sadly at 8.30 cloud drifted in and we were surrounded by a murky whiteness with zero visibility. We pressed on. About 14,300ft it started to rain which quickly turned to icy sleet – temperature 2 degrees above freezing. The native guides at this point briefly lost their way.

Momentarily the sky cleared and there, 200 ft above us, was the peak. I was in no condition to continue, learning something about oxygen starvation and altitude sickness. Alder made it to the peak to record the adventure!

At about 12,000 ft, on the descent we stopped for a short while to examine the wreckage of an American bomber which hit the face of the mountain. A wooden cross, in memory of the 16 airmen who died, has been erected above the top lake. We arrived back at our rest house at 6:30pm, exhausted.’ 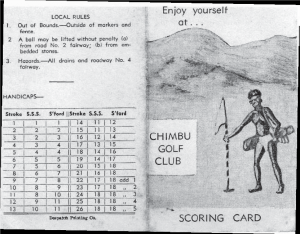 We marked out 6 greens and the airstrip was the fairway

11 October: I had to return briefly to Goroka. There were no aircraft movements from nearby Keglsugl airstrip, necessitating a walk across the range to Kwongi rest house, leaving at 12 midday arriving just before midnight! Next morning at 6:30 am I walked to Miruma and was met by Judy Downs, wife of the former District Commissioner Ian. The Downs’ coffee plantation Korfena was some miles from Goroka.

14 October: A Cessna 172 was chartered to fly to Kekl Sugl airstrip from Goroka. A memorable experience. The flight was a terrific one. Gaining the necessary height in the little Cessna took a couple of hours as well as losing our way and finding ourselves over the Ramu River. Backtracking west of Mt Wilhelm we located the strip, on a ridge, at the base of the mountain, 8,400 ft above sea level; just 800 yards long, not much wider than a road and an 8 deg. slope The sensation of approaching and landing was an exhilarating experience. It was reported, at the time, that Kekl Sugl was the highest operational airstrip in the world.

I rejoined the patrol at Gondamakane after a three hour walk which was completed on 26 October on returning to Kundiawa.

I was advised in early November of an immediate transfer to Finschhafen in the Morobe District which was to be another interesting and exciting phase of my career.

There is another aircraft story from Kundiawa which I promised Bobby Gibbes’ daughter I would relate.  Bobby had arranged to pick me up in the Norseman enroute to Goroka from Minj. We climbed into the cockpit, the aircraft hard up against the mountainous end of the airstrip. Power on, headphones on (as mentioned before conversation was impossible sitting behind and very close to a re-birthed Douglas DC3 radial engine at full revs), brakes off, we charged down the grassy strip for take-off. Around the halfway mark there was a loss of power and take off was aborted. We taxied back to the start and a second attempt with the same result.

We climbed out of the cockpit and Bobby, armed with a sizable screwdriver, opened the port engine cowling saying, ‘sometimes the carby float valve sticks’. He rapped the carburetor several times with the screwdriver handle, closed the cowling and said ‘third time lucky!’ Taxi back and after a minute or so of ear shattering engine ‘run up’ we took off and arrived Goroka soon after. To view more photos go to www. pngaa.net 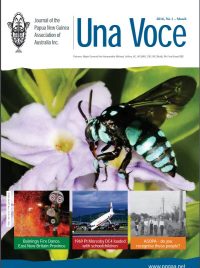