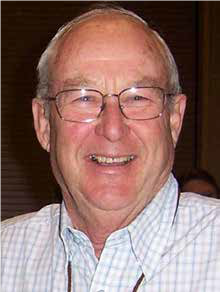 A good while ago I realised there are always stories of kiaps in the PNGAA journal, Una Voce, but rarely news of didimen. So, after conferring with the editor, I decided to remedy the situation.

I had completed a Diploma in Agriculture at Hawkesbury Agricultural College, Richmond, NSW in 1955; a short stint as a labourer with the Mosman Municipal Council; National Service Intake 2/56, Ingleburn NSW followed. Completing National Service was a pre-requisite for an entry permit to the Territory of Papua New Guinea. All new recruits were required to complete a short induction course at the School of Pacific Administration ( ASOPA) at Mosman in NSW. There were a couple of employment options after gaining my Diploma, as a Jackaroo in North West Queensland or, as an Assistant Agricultural Officer in Papua New Guinea.

19 August 1956 — Wearing a long sleeved white shirt, shorts and long white socks; farewell to family at mascot and on board the Qantas DC4 Skymaster – ‘Bird of Paradise’ Route. I have the menu cards in the attractive folder from that flight. Qantas economy class passengers had never been treated better.

My mother, bless her, kept the first of the letters I wrote, from day one and I will be using extracts from them in italics – with some editing – in my next contribution.

20 August 1956 — Dear Mum and Dad, Here I am safe and sound after a wonderful trip. The flight was exceptionally smooth and everyone in very high spirits. We arrived at Port Moresby at 7.30 am – cloudless and hot! with a fresh sea breeze.

Arrival at Jacksonfield has been well described by new recruits; a scene less tropical would be hard to imagine, so unlike the tropical landscape expected. The approach though, was fascinating; the coral reef and the very visible aircraft and wartime wrecks in the clear waters below. Twenty years old with all but empty pockets. I don’t remember any emotions. It was an extraordinary awakening, having never travelled overseas or experienced any other nations or their cultures.

21 August — Truly, I don’t know where to start. Everything has been so fascinating, strange and amazing; with everything happening at once, it seems as if weeks have passed. We were met at the airport by an administration representative who outlined our programs for the next four days; tours, slides, lectures, etc. We were driven to the hostel, about two and a half miles out of town, next to government house and on a hillside with a beautiful view overlooking the harbor. The hostel looked all right from the outside, freshly painted, big glass louvre windows covered with mosquito proof netting. As we pulled up our luggage was taken out of the vehicle by some local boys, who started up to the building. I nervously entered the hostel to be met by 10, happy chattering natives pointing the way to go. I followed them and ended up in room B3. I could not believe my eyes. The room ‘one man’ and the whole place brand spanking new – fluorescent lighting, innerspring mattress, washbasin and the whole of the front of the room built in cupboards, writing desk and drawers, chairs, two power points, shaving cabinet and mirror, etc. You would have to see it to believe it. As I walked out, there in the passageway was a built in refrigerator supplying ice cold water – honestly it is fantastic!

With other recruits and after a few drinks and the purchase of cigarettes – Two shillings- for 20 on the plane and six shillings and six pence at the store here for a tin of 50, we shared a taxi out to the mess which is about half a mile from the hostel. Walked in and again stood amazed. All cane furniture; no less than five refrigerators and native boys in white lap-laps waiting by the tables. We sat down and ordered dinner. Two helpings of crumbed cutlets, beans, potato and cabbage; a plate of peaches, ice cream and all the trimmings – even better than National Service! The rest of the day was spent in general discussion.

23 August — Today we had a trip to Sogeri; saw rubber, coffee, cocoa, sugarcane etc. A very interesting day which also turned out to be exciting as the road is just the width of two vehicles, cut out of the mountainside for 2,000 ft and at one place has a sheer drop of 1,000 ft. As we approached a corner at about 15 mph I said to the native driver ‘hey no quick time go along slow’ (in my best Pidgin English!). He replied ‘no Tabauda, me go along slow more chance meetum more car.’ (Heh, don’t go quick, go slow…No Master, if we go slow we will meet more cars.) We just held our breath on the way up and prayed on the way down!

By this time two of us had acquired a houseboy named ‘Geer’. When we got back that afternoon, there, laid out on the bed were perfectly ironed, folded starched shirts, socks turned in and rolled up, underclothes in the drawer, bed made, wash basin clean – it was fantastic – and our shoes cleaned. Certainly does beat National Service. Cost one pound for a six day week – phew! I will airmail one straight away. As far as we could make out ‘Geer’ is from a mission; honest, clean living and efficient.

24 August — This day was spent with various government officials and we met our ‘chief ’ – Mr Bill Conroy and he told us where we would be stationed, answered all our questions and we had a very pleasant talk. Mr Conroy gave us our districts postings. Lin Green is going to Kalo, a mixed farming area and experiment station about 50 miles south east of Moresby as assistant manager. Mick Belfield is going to Popondetta. Both Lin and Mick are new recruits. I felt very fortunate in receiving my posting – to Goroka in the Eastern Highlands District.

My first impressions in Port Moresby were the Koki markets, perhaps the best introduction to the lifestyle; the food; the colour; the relaxed laid back day to day way of life. Throughout my years in PNG there was one constant; the sensory, earthly smell of the villages, the native food and the people.

Another, very favourable impression, is the members of the Papuan New Guinea constabulary. Always, immaculately turned out, they are courteous and helpful. During one of the first, dark, evenings I had an interesting ‘brush’ with the law. Noticing a telephone (the old Bakelite handset) sitting on a shelf in a compound and accessible, it occurred to me it might be possible to ring home!

As I reached for the handset an ‘invisible’ form said ‘yu laik mekim wanem masta?’ (What do you want masta?) I was somewhat shocked. The ‘form’ took shape; a black, very black, Buka sergeant of police.

It was pointless endeavouring to explain. Pidgin English was not part of my vocabulary and English was not his. We said ‘goodnight’ and I retreated back to where I should have been!

25 August –– The Mandated airlines DC3 cargo charter to Goroka was due to leave at 7.30. (This was to be my first experience of ‘strip sitting’ and by no means the last in the land of ‘wait awhile’.) The aircraft turned up about two o’clock. Cargo was unloaded and the plane reloaded.

Several other passengers boarded with me. I made myself comfortable on a crate of lettuce! The plane was to include Kainantu on its route.

The pilot explained, being so late, we would fly straight to Goroka as it would be a bit hard to land on a grass plateau with no landing lights! The trip was quite comfortable despite the lettuce crate and I went straight to the hotel – the only one and really first class at four pounds per day including meals.

A stunning introduction to the Eastern Highlands as we flew low into the Bena Bena valley. The timber clad mountains around and above us; the green of the valley; the Bena Bena river glistening in the evening light, lazy smoke from the villages clinging to the mountain sides as we approached Goroka. Later, when on patrol in the Bismarck Range, I would watch fascinated from native villages as aircraft flew along the Bena Bena and Wahgi valleys, 2,000 ft below.

Had a goodnight’s sleep and after breakfast (we work on Saturday mornings) Jim Barrie, the District Agricultural Officer, picked me up, drove me to the office about a mile away and he talked about what I could be doing for the next 21 months. All very interesting and I’m sure I will enjoy it all.

Goroka is probably the most beautiful spot in Papua New Guinea. An amazing town; centred on a coffee industry and an airport – which virtually runs through the centre of the town. It has a population of 400 but never-the-less there are golf, tennis, football, cricket, badminton, table tennis clubs as well as a social and sports  club. A swimming pool completes  the sporting facilities. The airport handles about 40 planes a day from  Tiger Moths to DC3s.

The town itself is situated on a  plateau 5,00 ft above sea level  and surrounded by a horseshoe  of mountains. Mt Wilhelm, the  highest and over 17,000 ft, at  times has snow on the summit.

Despite the height above sea level,  the climate at Goroka is first class.  Day temperatures are about 75-78  degrees with little or no humidity.  The nights are sometimes very  cold and log fires are needed. The  weather is very consistent and from  November to May it rains about 3  pm every day and again during the  night.

Now something of your own  interest: the gardens. They are the  most perfect example of gardens  I have ever seen, the whole town being based on a garden pattern;  beautiful couch lawns immaculately  kept; low hedges; all kinds of  garden shrubs and trees and not one dividing fence in the whole town.

There are all types of flowers,  dahlias, gladioli, pansies, gerbera  etc. The plants are picture perfect,  the soil being particularly fertile  and plenty of water and native  labour.

If you are wondering why I have  dotted some t’s and crossed the odd i, it is because the lighting plant here requires new brushes  and periodically the lights flick and die for about 30 seconds and then  burst back into light. The town is  supplied by hydro power.

When the film ‘Walk into Paradise’  comes on in Sydney please see it as it was filmed on the old airstrip  at Goroka and it will give you a  good idea of the land form and  the natives who are no different  in dress and make up than in a  normal sing-sing or native dance today. In the part when they rush  down the airstrip to ‘attack’, I am  told there were 26,000 natives all  told in that scene. One can well  imagine this with the population  of the Eastern Highlands District  is over a quarter of a million and in  the Goroka District one hundred  and fifteen thousand!

A requirement of the Department was to keep a Field Officers Journal  (FOJ) on a daily basis, the original pages being forwarded to Head Office monthly. I have my Journals  covering nearly 10 years. On  completion of a patrol a detailed report was required. These gave  comprehensive oversight of the  work undertaken, the area visited,  the people, their agriculture and their economic development.

With the Editors’ forbearance the  story will continue in the next  edition of Una Voce.

Part 2 can be found HERE 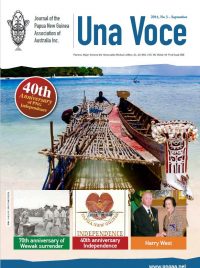