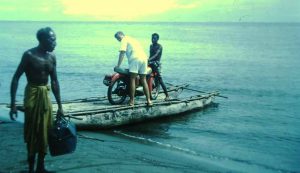 1 October 1960 – I signed off at BAINYIK Agricultural Station having made travel arrangements for a posting to the opposite side of the New Guinea mainland at KEREMA in the Gulf District of Papua as acting District Agricultural Officer.

Travel, as mentioned in earlier Una Voce’s, was never straight forward. I flew from Maprik by Gibbes Sepik Airways Norseman, a tubular steel framed, fabric covered, high wing monoplane, to Wewak, a Mandated Airlines DC3 to Port Moresby via Lae and a Piaggio – possibly – TAA to BAIMURU and then a workboat, the MV Magila to Kerema.

Another change, another challenge and a posting only to last a little over four months.
The Gulf District was a fascinating area. A coastal “jungle” of twisted tidal waterways, lowland river deltas and areas of fertile grasslands stretching and rising up to the Southern Highlands. Many of the waterways were navigable either by Government workboats or the traditional canoes made from hollowed out logs invariably powered by an outboard motor attached to the back of the canoe.

There were two major developing agricultural extension projects. A rubber factory at CUPOLA , South of Kerema, together with an extensive rubber nursery and mature rubber trees providing training to local farmers with a view to developing small holder areas for rubber production at MARUA. 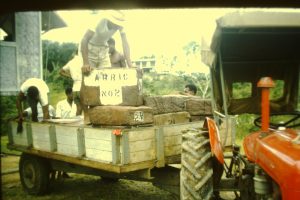 Bales of rubber being loaded at Cupola – photo David Montgomery

Marua Agricultural Training Station was being established several miles up – stream beside the Marua River north across Kerema Bay. Community housing for native trainees and a somewhat basic house for European staff and likewise for the Agricultural Fieldworkers who had graduated from Vudal Agricultural College near Rabaul.

Transport was, necessarily, by log canoe with an Archimedes outboard motor of questionable reliability or perhaps worse a Seagull – possibly one of the very original outboard prototypes. Depending on sea conditions in Kerema Bay, the tidal influence and rainfall effect on the Marua River, it could take up to three hours to reach the station. 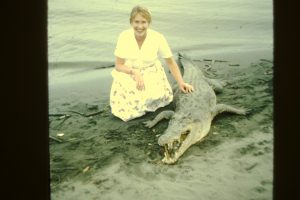 Gillian meets her first crocodile on the beach at Kerema

On one occasion, having entered the river, the outboard motor noise suddenly stopped. I looked around from where I was sitting in a camp chair to see that our motor had disappeared. A slow paddle to the Murua station wharf followed. Arrangements were made next day at low tide to locate and attempt to recover the motor with a congo-line of local villagers wading down the river. The search was called off when a healthy sized crocodile was sighted on the river bank.

The latter part of October and most of November was spent away from Kerema, patrolling and reporting on village activities and supervising the Murua developments. All tropical cash crops were in the mix. Traditionally copra production as well as cocoa, peanuts, lowland coffee and rubber.

Sailing through the lowland flood plains and waterways between Kerema and Kikori was a fascinating experience; somewhat like being a paid tourist. The workboat facilities were basic however there were cold showers, toilets and bunks to sleep in! One of the culinary delights of these trips was the abundant supply of mudcrabs generally purchased with twist tobacco. The crabs were restrained with tropical twine and delivered alongside our workboat. Any oversupply were placed overnight in the shower recess to be kept wet and cool. One morning when I opened the shower door I was confronted by a dozen or so angry, clawing mudcrabs that had broken free of their constraints. There is a technique to restraining large crabs. I had to call for expert assistance, John Fowke, at the time, was Officer in Charge at BEARA, the BAIMURU sub-district headquarters. Following a day visit to several of the villages on the BAROI River, the evening was spent with John at his “residence”. We were about to settle down for the night after a couple of “cold teas” – Negrita rum and water – when the house rats came out to play. John, irritated by their presence, got out his service pistol, loaded it with a several rounds declaring he would put paid to the scampering rats. One of the offenders ran under his bed sail. John lay prostrate on the limbom (sago palm) flooring and fired. Not one but several shots. There was a muffled, weak “pop pop” from under the bed. Humidity had got the better of John’s ammunition! We slept with the rats that night.

John’s recollections of Baimuru – Una Voce No.2 June 2017 – brought back great memories of The Palace Flophouse so named by my predecessor at Kerema – Francis Xavier Ryan. Aircraft continued to be part of my New Guinea experience. No less in Papua. The infamous and unreliable Otter amphibian was operated by TAA. Port Moresby, Yule Island, Kerema Baimuru, Kikori route. The landing wheels were recessed into the floats and hydraulically operated. To ensure they were fully extended (and locked!) when landing, the passenger sitting next to, and on the right hand side of the pilot, would be asked to manually crank the handle to ensure the wheels were down and locked. To the embarrassment of one TAA pilot landing at Baimuru, on the moss covered marsden matting ‘strip, the wheels were not fully extended and locked and he skidded to a halt on the aircraft floats. No serious damage was done.

My friend from college days, Gillian Marks arranged to visit TPNG in late December “to check the place out”. Prior to coming to Kerema Gillian flew to Samarai and travelled by workboat to Esa’Ala in the Normanby Group of islands for a week stay with another college friend, John Gosbell, then working for the Department of Agriculture. Having heard no word of Gillian’s departure for Kerema, I radioed, “please advise the whereabouts of Gillian Marks”? The telegraphic reply was almost instant, “no Otter we’ve got her”

Five years of my descriptive writing to Gillian and her brief initiation to the country was the catalyst for her to say “yes” when I proposed on New Year Eve 1960. Gillian returned to Australia in mid -January with a wedding planned later in the year. Her departure from Kerema was not without drama. Several aircraft bookings were made South from Port Moresby. Initially the Otter was unserviceable and with the second attempt it was en-route Kerema when it made a forced landing at Morobe. Finally our goodbyes and too, to her parents relief to know their daughter was on her way home.

Recreation leave was due and bookings made for early February. I was asked to defer this and design and prepare an exhibit for the Netherland’s Nieuw Guinea HOLLANDIA Show, Trade Fair and the opening of the 1st Netherlands New Guinea Council – the Nieuw Guinea Raad – 5th April 1961.
HOLLANDIA – April 1961.

An official visit to Netherlands New Guinea was a rewarding conclusion to the five and a half years in the Territory of Papua New Guinea. (TPNG) Hollandia had been visited previously to play tenni when I had been posted to Aitape on the south west coast of the New Guinea mainland.

The Dutch Administrator had invited the Department of Agriculture Stock and Fisheries, Extension Division to prepare a display for the 1961 Netherlands Nieuw1 Guinea Show and Trade Fair and to attend the opening of the 1st Netherlands NEW Guinea Council – the New Guinea Raad – on 5th April. Several days after my departure from Kerema, were spent in designing and acquiring material for the exhibition and arranging its dispatch to Hollandia. Our presentation was located at the Hollandia Fair grounds and was to be ready by 4th April. We didn’t realise that no work was done between 2 pm and 5 pm. We adjusted to this and our display was completed on time.

An unbelievable number of activities had been programmed to celebrate the inauguration of the Council and entertain some 135 official delegates and the many thousands of West Papuan people who had made their way to Hollandia.

Accommodation had been arranged on the vessel MV Kasimbar. A number of relaxed meals were shared with the ship’s Master, T van der Molan a welcome change after bachelor and patrol camp cooking. During one of the luncheons a Petty Officer walked up to the table, saluted, and passed to the Master a piece of paper. T van der Molan studied the paper, thanked the message bearer and said to those at the lunch: “the Indonesian Air Force was planning a bombing raid 1200 hrs today”. “It is now 1300 hrs they are always running late”. With that we all enjoyed our lunch. Up to 1961 and into 1962 the Indonesians had been intimidating but there was no aggression.

The speech by Nicholas Jouwe, Vice President of the Netherlands New Guinea Council at the Council opening was passionate and decisive expressing a wish to see the country evolve into an independent democratic nation. On that day His Excellency the State Secretary for Home Affairs, Dr TH Bot’s opening remarks said: “For the people of Netherlands New Guinea this day is an important landmark on the road to self-determination” and further into his speech, “The Netherlands will continue to assist in the process of your speedy independence, the fighting of poverty and ignorance – the bringing of peace, quiet and order where these did not exist before”

As I listened to the speeches I felt confident that Papua would move forward. A ten year plan was agreed!
History has recorded the events of 1962 – just one year later and the people of West Papua have had to live with the transition of its country; its people; its independence; to no longer own their culture and their way of life.

Forward to the Weekend Australian June 3-4 2017 and an extract from Hugh Grant’s book “Subtle Moments” on the occasion he met Dean Acheson the (then) US Secretary of State. Acheson tells him he had asked the Dutch if they really wanted to hang on to West Irian. They did not. “Well if I could get the Australians to take it was that alright?” Acheson wondered. It sure was and the sooner the better the Dutch replied. After consulting President John F. Kennedy, Acheson rang “that fat fraud Bob Menzies”. He declined saying they had enough trouble with their own half of New Guinea. So West Irian only went to Indonesia after you wouldn’t have it”

If what Grant has written is factually correct it is a terrible indictment of process and the United Nation’s role. Bruce Grant was a former High Commissioner, an advisor To Gough Whitlam and a consultant to Gareth Evans – a former foreign minister.

The visit to Hollandia and the celebrations were of part of history in the making. To recall that visit and those times a “table” display will be presented at the Christmas luncheon on 3rd of December 2017.