After being at ASOPA from 1961–62 I taught at four high schools in Papua New Guinea (PNG)—Malabunga, Goroka, Karkar and Brandi—from 1963 to 1977.  It is often hard to judge our impact as teachers. We cross our fingers and hope our efforts have left a lasting legacy, something that has significantly improved our students’ lives. Sometimes there is tangible evidence of our students achieving great success. But this is not always the case. Many achievements go unobserved by us. 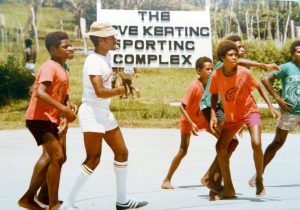 So, it has always delighted me that I was able to measure at least one level of my involvement in education—in concrete! Tangible blocks of concrete! Wherever I went during my time in PNG, I worked with staff and students to leave a concrete legacy in the form of basketball and tennis courts! We built facilities for the local community and created venues for competitions to take place. Hundreds of students gained great pleasure in using these facilities for basketball, tennis, volleyball, netball, etc.

But this was easier said than done. I arrived in Papua New Guinea (PNG) with no handyman skills. But there were lots of things going my way to achieve this lasting legacy.

Firstly, there were the helpful manual arts teachers in the schools, who provided invaluable expert advice, and enabled us to combine the curriculum with practical experience producing a product that could be used by all students and the local community.

There was a lot of construction going on in PNG at that time. This resulted in bountiful supplies of arc-mesh, and seemingly endless supplies of cement. Funding was available for sporting facilities. And, fortunately, we had a plentiful supply of labour, in the guise of willing students who assisted during school hours, and in the after-school ‘work parade’. 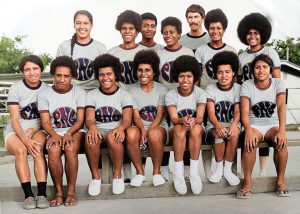 I cannot remember how many personal hours I spent mixing metres of cement by hand, with spades, in the absence of any mechanised turning equipment. Each court was laid down in smaller blocks, with ten to twelve blocks making up a basketball court.

The physical labour was hard in the tropical conditions. Although high humidity meant we didn’t have problems with the concrete drying out too fast, it meant the heavy work was exhausting. Carting sand, stones, cement, water, and then mixing all these was extremely tiring … but enormously satisfying.

The environment also delivered its own surprises. There was always the fear of a sudden tropical downpour. We had 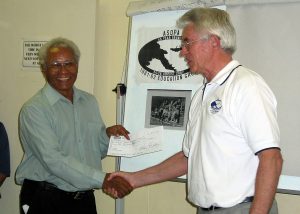 that event ‘covered’ literally. Tarps were ever-present, with schoolboys rostered to stand by, ensuring the tarps were secured, so as not to allow water to seep onto the newly-laid concrete.

But this kind of activity was a sign of those times. We teachers were often a long way from the major centres. If we just sat back then nothing would have happened. So, we just got on, and did it! It’s how we approached our ‘career with a challenge’. We were thrown in ‘at the deep end’ and found a way to do constructive things.

I shudder when I look back, realising our lack of health and safety awareness. In the early days, we worked barefoot, in the harsh sun, with no sun- screen, and no hats. Twice-yearly I now visit my skin specialist to have sun cancers burned off or cut out. This is another long-term outcome of my enthusiasm for leaving a concrete legacy!

I revisited Malabunga Secondary School and Karkar Secondary School in 2008. I was most pleasantly surprised to see the courts still in use some forty years later. In fact, at Malabunga, the courts had been provided with a roof and now doubled as an assembly/performance area.