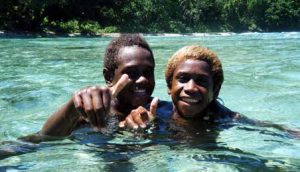 After less than a year at Keravat I was transferred to Utu (Kavieng), a place that brings a tear to my eye when I think about it.  I had to take stock, order fresh supplies, take delivery and delegate students their tasks for the day at morning parade (cooking duties, malaria spraying, grass cutting, etc).   Collecting old coral from the beach, burning it in a pit on the beach and then collecting the left-over calcium oxide, selling some to the local beetle-nut chewers as ‘kamdan’ and turning the rest into whitewash to paint the school walls was a six-monthly event. Any student not fit for duties was to report sick and was attended to by yours truly.

Having attended a Plantation Manager’s Medical course, I had been supplied with vials of procaine penicillin, syringes and two boxes of No 20 needles with the instructions “if they become blunt sharpen them with sandpaper and sterilise them in boiling water and methylated spirits”. The kit included sulphadimidine, sulphaguanidine and chloroquine tablets, magnoplasm, scarlet red ointment, bottles of eusol, etc. and the usual anti-malarial tablets with instructions on how to make magnoplasm if you run out (magnesium sulphate and glycerine).

For obvious reasons procaine penicillin vials had to be kept in the fridge (kerosene fridge, by the way) and when retrieved cold had the viscosity of honey. Prior to use one needed to warm these up in one’s pocket or one had no chance of getting it into the syringe and giving the intramuscular injection. However, apart from malaria the biggest problem was tropical ulcers (TUs); these are quite nasty and extremely painful, don’t heal by themselves, keep expanding by eating away good flesh, and could cost you a leg if you had an untreated TU on your shinbone.

Filling a TU crater with gunpowder and setting it alight, the treatment given to our POWs on the Burma Railway due to lack of medicine, makes one shudder. As a 24-year old I was probably the youngest headmaster of a secondary boarding school in TPNG, but I was not the only one. Many teachers, patrol officers, plantation managers, didimen, etc. were in their early twenties with duties and responsibilities normally associated with people in Australia of a much senior age. Yet, in spite of their young age, they performed admirably under the most difficult circumstances with excellent results and few complaints.

To keep the expertise of traditional canoe building alive, I had the students select a tree from the forest and, using traditional tools, build a native canoe from scratch, having ‘old hands’ supervise to ensure it was done in accordance with tradition. Then, after some months, the canoe was ready, launched and used thereafter to catch fish for the school communal kitchen.

Utu High School would have made a good venue as a Marine College as it had everything; various coral growths, shellfish (including the Gloria Mans), fish, turtles, etc., were close at hand for study. The classroom aquariums were continually filled with a change of fresh live fish from the reef which the students caught during their morning swims. The boys also caught larger fish from the rock pools by stunning them with some bush roots which were pounded and then tossed in the pool. The stunned fish floated to the top and, before they recovered and swam away, were grabbed and barbecued on the spot. Bush craft again.