A RECORD OF A DIFFERENT LIFE

I was thirty-five with a very stable position as a senior clerk in a chartered accountant’s office when I made the decision that being an accountant was not for me, and that I needed a more productive life which would be exciting as well.

The opportunity came in a most unusual way. It was about three o’clock in the morning, I had just arrived home from a heavy night out with friends. As usual, I turned on the radio to listen to the late-night jazz program before sleeping. About five minutes into the program an advertisement from AVA Australian Volunteers Abroad (AVA) requesting applications from young, and not so young, Australians to travel overseas and assist in less developed countries.  ‘This is just what the doctor ordered’ I thought as I wrote the telephone number on the wall next to my bed.

The next morning when I awoke the phone number on the wall reminded me of what I needed to do. Later in the day I called AVA and registered my interest in volunteering. This was the commencement of a forty-year career in Papua New Guinea.

About a week later, when I was still trying to remove the telephone number from my bedroom wall, I received a package of forms from AVA for application into the volunteer crew. This was about June 1978. I duly completed these forms, returned them and began making preparations for whatever they had in store for me.

Firstly, I put my resignation into the firm that had been my employer since leaving school. This resignation highlighted an event which would influence the rest of my life, I kissed the girl who would later become my wife and lifelong partner.

After some to-ing and fro-ing of documents I was eventually accepted into the group destined to travel in November 1978. In preparation to the commencement of my adventure I had to travel to Melbourne for an orientation and briefing on my posting. I had been advised that it was possible I would be posted to Rabaul, so I had gathered all the information I could on the people of East New Britain and was excited at the prospect of assisting the Provincial Government in their transition to independence which had been granted in 1975.

On my arrival to Melbourne, I was met at the airport by an AVA official and taken to the Melbourne University’s campus where I took a week’s orientation course and learnt my destination. Two days into the course I was informed that I would no longer be going to Rabaul, but instead I had been assigned to the Gulf Provincial Government as their Provincial Financial Advisor, to be stationed in Kerema, the Provincial Capital. All that study on the people and customs of the people of East New Britain went for nothing.

My travel to Port Moresby I remember well. We left Melbourne at 1.00 am and arrived in Port Moresby just as the sun was rising. From the airport we were transported to the Outrigger Motel. On arrival at the motel, we were told to wait in the lounge for our room allocations. While waiting, I kept hearing what sounded like a bird chirping but, despite my looking, could not locate the source of the noise. I later was informed this noise was the sound of geckos. These were something I had not come across in Australia, although I have since found out they are many in Australia.  During our sightseeing we visited the local market at Koki and went up the hill behind the village to get a better look at the town. Half way up the hill we discovered that it was used by the people of Koki as their latrine and we had to be very careful where we walked. 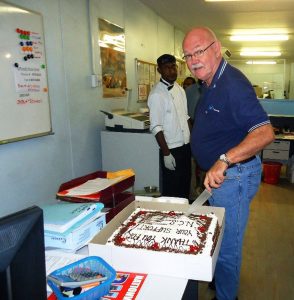 Cutting a cake at the Hidden Valley Mine’s mess congratulating our joint venture partner, NCS, for their assistance and support

On Independence the Papua New Guinea Government recognised that the provinces should have some income-producing avenues other than straight out taxes so each province was given half-a-million Kina to set up a business arm. This was an interesting exercise as some were extremely successful while others died very quickly.

A week later I was still in Port Moresby learning about Gulf Province, the fishing industry in the Gulf of Papua, the rubber plantations and other products being produced. This assimilation was conducted by the Business Development section of the then Department of Commerce. It was, while in Port Moresby, I found out that the Gulf Province, through its business arm, was intending investing in a fishing venture with a Japanese company which was harvesting prawns and lobster in the Gulf of Papua.

Eventually I was in Kerema boarded with the local doctor and his wife. Accommodation was at a premium and the only way I was able to finally secure a house was to team up with another volunteer, the provincial nutritionist.

Some years before Independence the government had set up a series of cooperatives throughout the country and had a support group monitoring and assisting their operation and performance. Generally, most of the cooperatives in Gulf were not operating because the government was no longer operating the support group. Therefore, one of my jobs was to wind up these groups. This involved extensive travel throughout the province. As we had very little travel funds in the budget, we went on joint patrols. My main companion on these patrols was another volunteer who was doing a PHD on dinosaurs, and using the crocodile farms in his study. I was shown the information he required and while I was advising the farmers on their financial requirements, I also gathered feeding and growth information.

During my two-year contract in Kerema I had a trip to Tokyo with our joint-venture partners to understand the seafood market in Japan. I travelled with my understudy (General Manager designate) in the joint venture, and on the way back we detoured to Manila where we met up with the PNG delegate to the Asian Development Bank, who took us on a tour of the bank and detailed all the projects the bank was funding in PNG.

Towards the end of my contract, the investment arm purchased the local hotel and it fell to me to locate and appoint a manager. After several months and much searching I managed to locate a manager. The only problem was he would not be available for several months, so it was up to me to operate the hotel until he was available. Six months later he turned up.

As my contract was coming to an end, I was offered a position with a third-level airline operating out of Port Moresby. I accepted this position and joined Douglas Airways in 1980. Employment in PNG at this time provided accommodation and when I arrived in POM from Kerema I was escorted to my new two-bedroom accommodation, which included a fully stocked refrigerator and housekeeper/cook. I was going to enjoy working in POM. This position enabled me to travel to most stations on the mainland of PNG.

After two years with the airline, I decided I needed to see a bit of the world, so I left for England via Singapore. As I was able to retain my airline credentials, I was travelling on IATA discounts. Though having big discounts, when purchasing tickets it had no preference, in fact it had the opposite effect and you had no preference at all. After two weeks in Singapore, I finished up purchasing a ticket to London via Moscow at about the same price as my discount tickets!

When I returned from Europe to Brisbane three months later, I started looking for a job and went to the local employment agency where, sitting on the notice board was advertised a position for an accountant in PNG; fate! That afternoon I rang about the position and was invited for an interview in Mt Hagen. A month later I was back in PNG with a position monitoring a group of stores in the Western Highlands Province.

Several years later found me in charge of the Accounting and Finance Department of the Agricultural Bank of PNG. A major change in the middle management caused me to resign and return to Australia. I caught up with the girl I had left behind ten years previously and we married.

After working for an old client, I found that I no longer had a lot in common with the people I worked with in Australia and, as if to support this, we got a new neighbour who, like me, had worked overseas for many years and was suffering severely from an inability to settle down. We both decided that we should become expatriates again. He went to Africa and I to PNG to join the mining industry.

This period with the mining industry enabled me to work closely with the local landowners and assist in partaking in spinoff business generated by the mines.

Finally, after working in Porgera, Misima and Hidden Valley I got the opportunity to set up a landowner group into a company which provided several and varied services to the Hidden Valley mine. It took six years to get the group on a sound financial footing and paying dividends.

This done I retired to the Sunshine Coast of Queensland with the knowledge that my forty years in Papua New Guinea had made a difference.