In Part 1 of this story schoolboys re-enacting an army patrol on the banks of the Buso River had called for a helicopter to evacuate a wounded ‘soldier’. 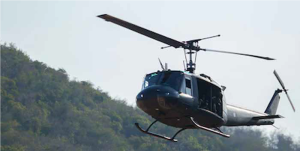 … and as the platoon anxiously waited, we could hear in the distance the sound of a helicopter approaching. As the sound got louder and louder, there were smiles all around and Wayakwa, our radioman, was given some praise for his efforts in getting a helicopter to come so soon to pick up the casualty.

But after a while, the sound of the helicopter’s engine faded and we could tell that it was no longer headed in our direction, but it was headed for the headwaters of the Buso River. ‘Maybe the helicopter had missed our location, but it would come back if Wayakwa got back on the radio and pointed out our exact position to Igam Army Barracks,’ somebody said.

Yes, most of the troopers agreed that Wayakwa should get back on the radio and call Igam Army Barracks again to pinpoint our exact location and get the helicopter pilot to turn around and head downstream to where we were. Enthusiastically, Wayakwa got back on the radio and called the barracks again, ‘This is Alpha 1 calling Bravo 2. Over. Bravo 2, do you read me? Over. Please inform the helicopter pilot to head downstream. Over. We are located some three miles downstream from Wagangluhu village, and some five miles from the sea, do you read me? Over.’

And when the helicopter finally landed, some 30 metres away from where we were, somebody shouted, ‘The white men are going to steal us and take us to Australia.’

At that instant every trooper fled in every direction into the thick jungle behind the riverbank. Although barefoot, we did not care about rattan spikes or any other mishaps that may be in our way. We had to flee as fast as we could and as far away as we could from the riverbank.

In the next few minutes, it was a case of every man for himself- for the platoon commander, his subordinates and the troopers. It was ‘abandon ship’. It was chaos and nobody could tell where the other one was going as we disappeared into the thick jungle.

For the next few moments everyone went his own way, and all one could see was the path in front of him as each kid made his way through the jungle without knowing what his final destination was.

And as kids, this was a terrifying experience, especially when there was a helicopter with white men inside that had just landed on the riverbank behind us. The thought of these white man catching up with us and taking us to Australia drove our adrenaline levels so high that running through the thick jungle was just like running a 100-metre race on a grassy athletic field.

We came upon a new garden and there was Uyac’, one of the two subordinates to the platoon commander. He was with some of the troopers and was making a head count as I and the other troopers arrived on the scene. Geding, the other subordinate to the platoon commander, was not present. As the troopers arrived on the scene one by one or in groups, we would burst out in laughter over the incident we just encountered along the banks of Buso River.

As each group sat around in circles in the garden and chatted about what happened, there was laughter everywhere. Some people could not hold back tears as each story unfolded, and people were literally lying on the ground and holding onto their stomachs as they laughed off what they just heard.

As we waited and laughed at the stories that were told by each trooper, Geding and the platoon commander, Namun, arrived on the scene. There was laughter all around again as these two senior officers arrived on the scene. After they told of their stories and everybody had another laugh, the platoon commander wanted another head count to ensure no soldier had gone missing in action.

‘Do a thorough head count for us to see if anybody is missing in action. Uyac’, Geding, my two subordinates, please get all troopers in line and do a head count,’ Namun ordered.

After a thorough head count the two subordinates informed the platoon that everybody was present except our radioman. Wayakwa was missing, and nobody knew about his whereabouts. ‘He was still on the radio as we all fled into the jungle when the helicopter landed on the riverbed,’ somebody asserted. ‘Yes, that’s true, Wayakwa was still on the radio calling the barracks when we all fled into the jungle,’ somebody else interjected.

There was silence, and everybody was anxious as to what had happened. The absence of our radioman was a big concern to the commanders and the troopers as our little minds endeavoured to fathom the events that led to our escape into the jungle and his disappearance. However, somebody suggested that we should call out again to attract our radioman’s attention. Maybe he was still in the jungle, but he was scared and did not want to come out.

‘Yes, let us all call out for the radioman,’ our platoon commander suggested, ‘maybe he has gone too far and could not hear us or he has met some people from the village and has accompanied them back to the village.’

Then everybody started calling out for our radioman, ‘Wayakwa, come back, we are here in the garden. The helicopter has gone, and there is nothing to fear. Please come out, we have to go home now. Please come quickly, we are waiting for you.’ The callings went on for a while, but there was no return call from Wayakwa. We could hear the birds singing in the trees, but we could not hear any human beings returning our calls.

It was Wayakwa all right. He had heard our calls in the jungle and had come to find us.

As Wayakwa came onto the scene, we all were relieved that he had finally found us. We were all happy that he had not been taken away to Australia by the white men and, surely, we would not be in trouble with his old mother or the village people when we returned to the village that day. It was a joyous moment for the troopers and our commanders. We were all present, and no soldier was missing in action.

As Wayakwa took his seat in the garden, every trooper went up to him and hugged him. It was as if he had come back from a faraway place after being away for many years. As soon as Wayakwa had taken a good breather and had regained his composure, everybody wanted to know what happened to him after the helicopter landed on the riverbed. At that instant, Wayakwa burst out in laughter as every trooper and commander joined in. The laughter went for a while and then there was silence.

Even before Wayakwa had completed his story, some of the troopers and commanders were lying on the ground holding onto their stomachs as they laughed off their heads. Some of the troopers literally had tears in their eyes as they laughed at Wayakwa’s story. After all the laughter, Wayakwa completed his story. It was a long story, and every time it hit a funny part, there was laughter everywhere. His story was the climax of the army patrol that went wrong that very day.

Wayakwa was commended by the commanders and troopers for being a good radioman. In fact, his frantic calls had really brought a real-life helicopter to land on the riverbed in real time as anticipated by the platoon.

This was a children’s military game that we played out in the jungles beside the Buso River many years ago. But it became a reality when our radioman’s call for a helicopter actually landed one right beside us in real time as we had anticipated.

It was a day like no other and an army patrol like no other. It was an experience we would cherish for the rest of our lives.

Nalau Bingeding is one of the troopers and the author of this story. He is a former public servant, now a private citizen living in Port Moresby.
Wayakwa Aimak, the radioman, is now living in the village. He is currently the chairman of the Law and Order Committee for Wagangluhu village.
Namun Awaka, the platoon commander, is now a common villager living in Wagangluhu village.

Geding Tiaga, one of the subordinates to the platoon commander, is now living in the village. He is currently the Peace Officer for Wagangluhu village.

Uyac’ Dhao, another of the subordinates to the platoon commander, is now living in the village. He is currently the Deacon of a local Pentecostal Church in Wagangluhu village.