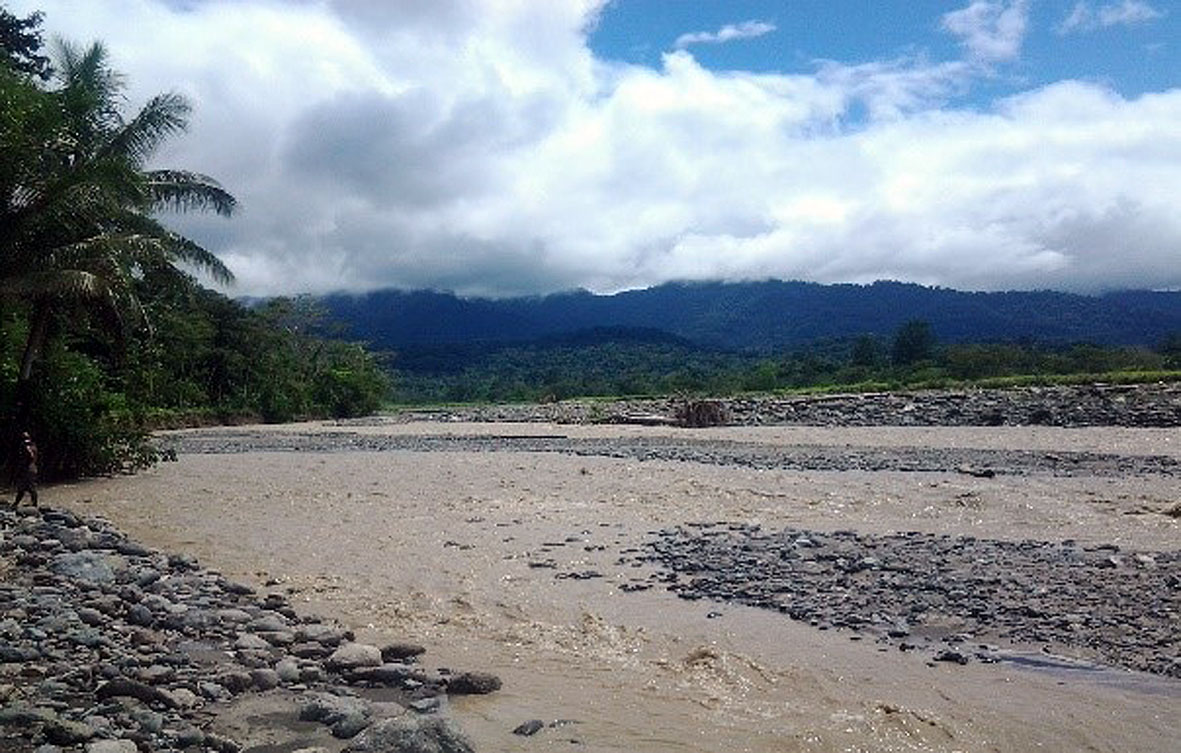 Moreover, annually, the Papua New Guinea and Australian defence forces used the banks of the Buso River for joint military drills, and the excitement of watching these drills after school was a bonus for my peers and me. The sound of machine guns, bazookas, M16s and army helicopters drove our little minds crazy, and all we could think of doing the next day was to come again and watch these epic military drills.

Although we were just third and fourth graders in our local primary school, we knew the names of most of the military equipment used and the types of actions taken by the soldiers in the drills. We also knew the role of the radioman and we learned by heart the words he spoke during the drills.

After the drills were over and the soldiers left, my peers and I usually struggled to fit back into our routine village and school lives. And if you saw three or four heads clustering in one corner of the school yard during lunch break or after school, you can be sure the discussion was about the latest military drill along the banks of the Buso River.

But to really get the hangovers of the latest military drills out of our systems, we would gather at the river after school and act them out using whatever resources we could find in the nearby bush. And to top it off, we would take army patrols along the banks of the river in the direction of the sea, and if dusk set in we would abandon the patrols and return home. Acting out the drills after school would go on for some time until the military madness was flushed out of our systems and life in the village or at our local school returned to normality.

But of all the military enactments my peers and I had during our childhood days, I have not forgotten one of our regular army patrols along the banks of the Buso River. What happened on that fateful day is implanted forever in the back of my mind, and every time I run into my childhood friends I am reminded of the army patrol that went wrong.

It was a Friday and we were let off at 10 am after completing work parade at school because our teachers needed to go into Lae City to collect their pay cheques.

The school bell rang and it was time to head home, but we all knew where we would meet and what we would do that day. A certain spot along the banks of the Buso River was where we would meet that very day for our next military patrol. This meet was special because the fifth graders had heard our stories and were enthusiastic about joining us, the third and fourth graders.

When we were all gathered at the appointed place at the river, everyone went about preparing for a patrol down the banks of the Buso River. Wild banana stumps, sticks, vines, stems of giant ginger species, known as golgol, were plucked out of the nearby bushes to make replicas of machine guns, bazookas, M16 guns and a wireless radio.

At first there was some excitement, but it soon died down and there was silence as every kid in the platoon wanted to make the best gun he could possibly think out. As each individual crafted his gun, he would glance at the others around him to ensure his gun was better than theirs. Everyone in the platoon was making a gun except one person, his name was Wayakwa, and he was tasked by our platoon commander to make a wireless radio.

Wayakwa was one of the kids who was usually picked on by others at school for trivial matters, and most of the time you would not find him mingling with other kids after school. But that very day Wayakwa came to join the platoon and, somehow, he was appointed to be our radioman and was accorded some respect.

I had crafted an M16 gun for myself, but the quality of my gun was not at par with that of the other kids. And as I took a glance at the other kids and their guns, I could not comprehend why they were so serious in crafting guns that were perfect replicas of real M16 guns, bazookas and machine guns.

There was something special about this particular patrol so the preparations were meticulous, but I could not work out what it was. I had a hunch something big was going to happen that very day, but I could not tell whether it would turn out to be a good or bad thing for the platoon.

As the preparations progressed, all eyes were now fixed on the radioman and his wireless radio. Everyone wanted the radio to be a perfect replica of a real radio, and once in a while somebody would comment on what had been left out or what needed to be amended to improve its quality. When the radio was completed, Wayakwa was standing beside this replica made out of wild banana stumps, sticks, vines and stems of golgol. I could tell that it would have been in excess of 20 kg.

For third graders like Wayakwa and myself 20 kg was usually beyond our carrying capacity, but I could tell that Wayakwa was not bothered by the radio’s weight. He had the special task of being our radio man, and it was his responsibility to carry the radio despite its heavy weight, and to earn the respect of the platoon.

Finally, everything was in order and the platoon was ready to head downstream. Everyone had their faces painted with charcoal and their heads covered in banana leaves or some grass species, and their weapons were in their arms or on their shoulders.

Our radio man was already raring to go, but his twenty kg load of wireless radio was still on the ground as he gazed at it with a smiling face.

Then the platoon commander and his sub-ordinates gathered some ten metres from where we were and discussed the patrol plan while we waited anxiously for their instructions. The plan was that the platoon commander, Namun, was to take the lead of the patrol and his subordinates, Geding and Uyac’, were to strategically position themselves in the patrol line to give necessary instruction should we encounter enemy patrols. The radioman, Wayakwa, was to be the last person in the patrol line so that he could call for a helicopter from Igam Army Barracks in Lae City if there were any casualties along the way. 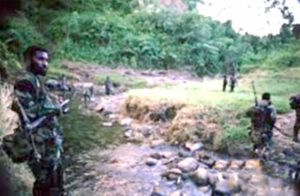 Slowly, the platoon headed downstream. There was silence as the troopers cautiously scanned the surrounding bushes for signs of enemy patrols, and, once in a while, the platoon commander would turn around and signal for us to sit down in the bushes and wait for some villagers to pass by on their way to our village.

The platoon had travelled for two miles and the patrol seemed to be progressing smoothly with no casualties, and the presence of the platoon had not been compromised so far. Villagers who were returning from their gardens or fishing trips to the sea did not spot us, and we were anticipating a successful patrol if the commander would call off the mission in the next one or two miles.

All was going well as the platoon headed further downstream, but suddenly there was a scream from the front line and the platoon came to a halt. Then the troopers in front whispered to each other and passed the word down the line so that all platoon members were aware of the situation.

The platoon commander, Namun, was hurt. He had stepped on some rattan spikes and his foot was bleeding heavily.

As the rest of the platoon waited patiently, some of our medics began work on the casualty. The rattan spikes were removed from Namun’s foot, the wounds were cleaned with some clear sap extracted from some nearby vines, and juice from the leaves of the piper plant was squeezed into the wound to dry up the blood.

While this was going on, some troopers began preparing a stretcher using sticks and vines to carry the injured person to the riverside for the helicopter to come and whizz him off to Igam Army Barracks for further treatment.

At the same time the radioman had begun making frantic calls to Igam Army Barracks for a helicopter to be sent immediately.

From the back of the line we could hear Wayakwa frantically calling Igam Army Barracks for help. ‘This is Alpha 1 calling Bravo 2, Over; Bravo 2, do you read me? Over. This is Alpha 1. Please send a helicopter to Buso River; Over. We have a casualty; the platoon commander for Alpha Company is injured; Over.’

Then we hear Wayakwa changing the tone of his voice and answers himself as if Igam Army Barracks was responding to his calls. ‘Roger, this is Bravo 2 calling Alpha 1; Over. Message copied; do you read me? Over.’

While the medics were preparing the casualty for evacuation and Wayakwa was calling for help, the rest of the platoon was on alert in case an enemy patrol crossed our path. The troopers were vigorously scanning the riverbank and the nearby bushes for signs of an enemy patrol approaching.

It was all thumbs up for the platoon, and you could see smiles all around as we waited patiently for the helicopter to arrive.

But after some thirty minutes or so, there was no sign of a helicopter coming to pick up the casualty.

The platoon commander, Namun, was already placed on a stretcher, and he was impatient and wanted to know if the helicopter was really coming.

‘This is Alpha 1 calling Bravo 2; Over. Bravo 2, do you read me? Over. This is Alpha 1. Please send a helicopter to Buso River. Over. We have a casualty; the platoon commander for Alpha Company is injured. Over.’

As Wayakwa repeatedly called Igam Army Barracks using his wireless radio, the platoon listened intently. Then Wayakwa turned around and enthusiastically informed the platoon that a helicopter had been dispatched and would soon land on the river-bed of the Buso River to pick up the casualty.

Editor’s Note: This story and its second part to be published in the next issue were originally published on the writers’ blog Ples Singsing: HERE