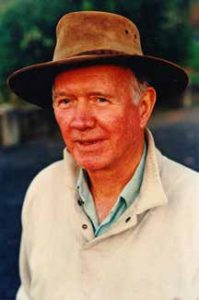 Peter was born in Samarai, PNG, in 1926 to Rhoda and Philip Coote. After a few years in Samarai the family moved to Rabaul where Philip became Company Manager of Burns Philp. Peter’s older brother, Dion, was born in Port Moresby in 1919 and his younger sister, Diana, born in 1930 in Rabaul.

The family lived in an old German house named Haus Rakaia overlooking Rabaul, and Peter attended the local European Primary School. Just before he turned 11, Peter was sent to boarding school at Knox Grammar in Sydney, entering in Grade 5. Travelling by ship each way and stopping off at various ports in PNG and Australia meant that there was only one trip home a year – a boatload of school children! Other school holidays were spent with friends in country NSW, which he much enjoyed. Peter grew into a tall, handsome lad over 6 feet and was a good runner and rugby player.

The same year that he went to boarding school, in May – 80 years ago now – there was a twin volcanic eruption in Rabaul and their home, situated within a couple of kilometres of Tavurvur volcano, was smothered in volcanic dust and ash. A new house was built on a beach several kilometres out of Rabaul at Tavui. Little did they know that it was on the edge of a massive underwater volcano which was only discovered about 15 years ago.

At the end of 1941 Peter was advised not to return home for the Christmas holidays. A decision to evacuate civilian European women and children was made and on the 22 December 1941 his mother, sister Diana, and Hannah Hildebrandt were evacuated with others from Rabaul to Australia, given only a few hours’ notice and allowed only a 30-pound suitcase each. Boys 16 years and over were not evacuated and, as Peter was nearly 16, it was unlikely he would have survived. Two of his close friends were in Rabaul and were killed. He always remembered them.

The Japanese began aerial reconnaissance over Rabaul the day after Pearl Harbour and in early January 1942 started their ‘softening up’. Peter’s father, Philip, was lucky to survive the bombing of their Tavui Point home on 20 Janaury 1942 three days before the invasion. The Japanese must have learned that the Australian Army wanted to use it as their Officers’ Recreation home.

The most appalling and sickening part of Australian WWII history in the Pacific then occurred when the few men that escaped Rabaul told of mass murders and barbaric executions by the Japanese invaders. Philip, was not heard of again. Over 1,000 men from the New Guinea Islands and the Australian Army simply disappeared.

After the end of WWII, nearly four years later, the family were told that Philip was taken prisoner by the Japanese along with other civilian European men in Rabaul and the majority of the Australian administration there.

At the same time, in late October 1945, the family was officially notified that Philip was presumed to be on the Japanese hellship MV Montevideo Maru and that the ship was torpedoed nearly three and a half years earlier by a US submarine on 1 July 1942 off the coast of the Philippines. The family were devastated.

A young man in PNG

After gaining his Intermediate Certificate, Peter joined Burns Philp for a year in Sydney. Then, as soon as he had turned 18 in 1944, he joined the Army and was sent to Cowra for basic infantry training. When the break-out occurred, Peter was sent to guard POWs who were still in their compound. Peter was offered a position in Intelligence but instead, he joined the Australian New Guinea Administrative Unit, ANGAU, and went to New Guinea. This suited as he then had a chance of getting back to Rabaul.

As an 18 year-old with ANGAU, Peter would go on patrol in the New Guinea Highlands often the only Australian with a long line of carriers and police bois. He patrolled the Boana area, east of Nadzab (up the Markham Valley area), spending time in Mt Hagen and Wabag, and Gembogle, at the foot of Mt Wilhelm, PNG’s tallest mountain. It was at Hagen that Peter was in line to receive a commission when war ended. Peter often commented that all the Australians in that situation owed their lives to the police bois who were deserving of greater recognition than what they were given.

At war’s end he was posted over to New Britain and Gasmata. Despite still being with the army his position was now Cadet Patrol Officer. Gasmata and surrounding area had been under Japanese occupation and devastated. The aim was to get the local economy back to normal as soon as possible.

Eventually Peter was sent to Sydney for discharge but, being low on points, was sent to the Italian pow camp at Myanbat in the Hunter Valley. On discharge, he rejoined Burns Philp and requested a transfer to Rabaul where he ran the Qantas agency.

Then, when another war widow decided to sell her plantation 25 miles out of Rabaul, Peter’s mother was keen to return to PNG to live, and decided to buy it, sight unseen. Peter, at 24 years old, went out on his own to inspect it. It had been terribly neglected during the war and was very overgrown with tall kunai grass and lucaena glauca trees. After his mother and sister returned to Rabaul in 1949, Peter resigned from Burns Philp and the three of them took over Vunapau Plantation, which was only planted 30% with cocoa at the time. There was a native-material house with a corrugated iron roof over the kitchen which provided the only water supply after rain. When they ran out of water they would go down to a creek running through a gully a distance from the house and collect water in buckets. It was sometime before the cocoa plantation was properly producing so Peter eventually took work on another plantation, Rainau, whilst supporting the family.

In 1952, Langu Plantation in the remote Witu Islands, 200 miles from Rabaul, was purchased. Peter and a friend, Reg Harris, sailed out there in the Burns Philp ship Katika. The plantation was overgrown with vine and bush and all they had was a 3 tonne ex-Army truck they found in the middle of the plantation which they managed to get going again and a malthoid – tar paper – house built on the old German foundations. The skipper of the ship told them they’d be lucky to survive six weeks.

Peter had met Margaret whilst working at Burns Philp in Sydney and they married in 1954. She had bravely agreed to go and live on this coconut plantation in the middle of the Bismarck Sea, a very brave move for a Sydney girl! What an adventure they shared together. A ship would bring supplies every couple of months, sometimes with longer gaps. There was no electricity, telephone or television. Their contact with the outside world was via 2-way short wave radio participating in the small ships sked to see when copra and food boats would arrive. They traded trochus shell with the locals and invested in a Ceylon hot air copra dryer from the UK. Peter’s boating skills were honed when they bought the 38ft workboat, MV Langu, and he would have to negotiate the endless reefs of the Bismarck Sea to recruit labourers from New Britain. During this period on Langu Plantation, Andrea and Victoria were born.

Peter’s careful management of the plantation ensured its success. Managing these outlying plantations included managing the food source for a large line of labourers (about 120) as well as attend to all their medical problems in the little hospital – from someone falling out of a coconut tree, to dreadful tropical ulcers and tropical skin conditions to malaria and colds!
After a number of years living in this isolated but beautiful spot Peter and Margaret moved to Rabaul by 1960, where Robert was born.

Peter supervised the various Langu Plantation managers throughout his years in Rabaul. Dick Doyle remained for many years as manager, purchasing the plantation with others in 1985 and later, outright. Having extensive knowledge of copra, cocoa and agriculture generally, Peter set up Elvee Trading Pty Ltd in Rabaul, an agricultural supply store with a twist – Margaret’s interest in sewing meant that the store also became the PNG Bernina centre for Swiss sewing machines. Peter and Margaret spent many hours working in and enjoying the magnificent garden in their Rabaul home, growing all colours of bougainvillea, ixoras, frangipani, hibiscus and, after Peter’s trip to Malaysia/Thailand, growing the most exquisite tropical orchids.

For a time Peter took an interest in lapidary. He fostered an interest in stamps and as a family, we benefited with all the First Day Covers of the beautiful PNG stamps. A day sailer was bought from the UK and many years were spent racing Muntreste on Rabaul Harbour. On weekends the family would drive to outlying plantations where there were with beautiful coral reefs to explore and nice white sandy beaches, contrasting with the black volcanic beaches closer to Rabaul.

Peter and the family remained in PNG after its Independence in 1975, with Peter and Margaret finally leaving in 1985. In September 1983, the earthquakes increased in Rabaul and a Stage Two Alert was announced, meaning an eruption was expected within days to weeks. Preparations were made to evacuate at short notice, including setting up a food dump and ensuring there was a reliable water supply on the plantation 30 miles out, packing up the house and shipping the contents to Australia whilst keeping only basic items that could be lost.

Peter, with Margaret, spent 25 years at Rosebank in Northern NSW where they grew avocadoes, limes, custard apples, Nagami cumquats, coffee, and macadamia nuts – and bee hives produced honey. Many school holidays were spent there. One day Peter was showing his grandchildren how to use his rifle. ‘Aim for the rain guage’ he suggested, thinking they would miss. But that was the end of the rain guage at Rosebank!

Peter never ever complained about anything. Even when he was diagnosed with macular degeneration which eventually made reading, something he always enjoyed, impossible. He was later diagnosed with Parkinsons Disease. He would listen to CDs and radio; loving classical and easy listening music. Peter was a great source of news from the radio and could speak on a wide range of subjects. Being born in Samarai, then an Australian territory, later serving in WWII, and later on holding an Australian passport, it was a surprise at 84 years, to receive a Commonwealth letter asking him to prove his Australian citizenship.

Peter always had an unfailing ability to be a gentleman – to pull out the chair for Margaret, to open doors, to ensure his family was safe. When people said, which they often did ‘Your father is such a gentleman’ it was clear that his integrity shone through.

Peter was always so grateful for everything anyone did around him. He was kind, dignified, humble, generous, hardworking, much respected, eternally patient, responsible and had a dry sense of humour. The family could always depend on him – and his sense of fun. He was a true gentleman and gentle man in every sense. He would always listen – and then make a thoughtful and sensitive reply. He never had a bad word to say about anyone.

Peter was a wonderful and much loved father and grandfather and through him many extraordinary experiences were shared by the family.
He is survived by his wife Margaret, by his children Andrea, Victoria, and Robert and by his grandchildren Katie, Leilani, Chris and Rebekah.