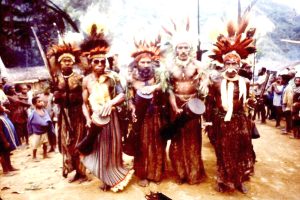 Vincent Kumura, whose fire dancers were on the front cover of the September issue of PNG Kundu, and I became Facebook friends several years ago. Having Gende (Bundi) friends in common, I was aware of Vincent’s tourist business (Eco-Lodge) but, in visiting the Gende over forty years to do anthropological research, I neither saw nor heard of the Imuri fire dancers. 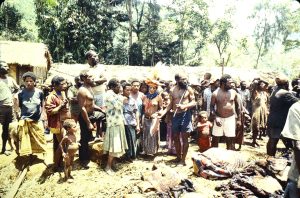 Gende Big Man Ruge Angiva giving away one of his daughters in marriage during the Poi Nomu festivities in Yandera village, 1982

I do know Imuri. It is a tiny settlement on the ‘road’ between Karasokara and Yandera villages that I passed on treks to and from Yandera. I am also familiar with Snow Pass (snopas), a village high in the clouds that I passed by on my way in and out of the Gende area via the Chimbu route. I spent four weeks there in 2009 with a team of assistants carrying out a census/social impact study funded by Marengo Mining when they thought they might have found a valuable copper deposit in addition to one closer to Yandera village.

When Marengo’s board of advisors dropped in, a local man dressed in Mavi (dog) costume greeted them along with other dancers. Traditionally, Gende male initiates called themselves Mavi in honour of wild dogs living in the vast forests in the area. While traditional male initiations are no longer carried out and haven’t been since the early years I was in Yandera in 1982-83 and while I taught at UPNG in 1986 throughout 1989, young and not so young men continue to call one another mavi in 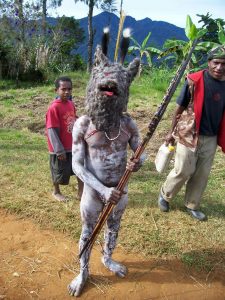 friendly camaraderie. This was the case during my eleven visits between 1994 and 2016 to places like Ramu Nickel, Yandera and many other Gende villages.

Big events for tourists were rare, although the two mining companies in the area financed the occasional circle of women dressed in traditional garb meeting company personnel.

Tourist operations such as Kumura’s and Betty Higgin’s lodge up on nearby Mt Wilhelm provide work for local people as well as opportunities for traditions to be revived—and revised. After the COVID-19 pandemic settles down, I look forward to returning to PNG, seeing friends like Betty Higgins (whose father was a Big Man in Yandera who took me under his wing), and hopefully the fire dancers. Over the years, my work has focused on economic change and inequality and their political and social impacts on Gende society. The revival and transformation of old customs in the modern tourist industry would make an interesting study. 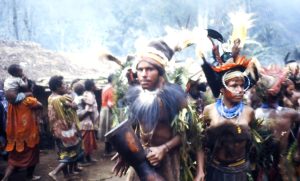 When I first worked with the Gende I witnessed two large exchange events (Poi Nomu) that included the whole Gende community but none of these recent dances. The events went on for weeks with multiple singsings and various ceremonies. Hundreds of pigs and thousands of Kina were exchanged. None of it was for tourism. It was for their own social and political ends. I am looking forward to getting back to PNG. Perhaps I will get to see and learn more about these and other new enterprises of Kumura and Betty.