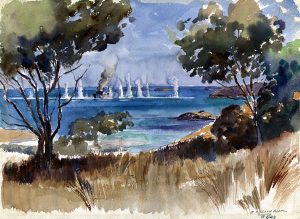 Painting by Richard Ashton, showing Japanese bombs exploding around the MV Macdhui, in the first bombing attack on the vessel at Port Moresby

With thanks to the PNG Ports Corporation who posted the following 80th Anniversary Tribute to the MV Macdhui on Remembrance Day, 23 July, this year in PNG.

Towards the west of Fairfax Harbour, near the Port Moresby Technical College at Kanudi, lies the wreck of a vessel with a colourful history. Lying almost completely under water, MV Macdhui has been there for 80 years and is a common landmark of Port Moresby, but its history is unknown to many oblivious travellers. Macdhui is the ship that brought explorers, missionaries, kiaps, and colonisers to Papua New Guinea before WWII, assisted to evacuate them during the war, and brought in medical supplies and Australian troops to fight the war in PNG.

Macdhui — named after the Scottish mountain Ben Macdhui — a passenger and cargo ship of 4,480 tons, was built by Barclay Curle & Company in Scotland for Burns, Philp & Co., and launched on

The ship could carry 167 first-class passengers and had a music room, smoking room, a large deck area that could cater for a game of cricket, and a dining room that could hold all the passengers in one sitting.

Her maiden voyage took place in March 1931, when she sailed for Suva, Fiji, via the Azores, Jamaica, and the Panama Canal, carrying coal.

Later, Macdhui became a name synonymous with PNG, travelling to most ports there, and made round trips from Sydney, Bougainville and PNG. These round trips were popular and sometimes the ship was fully booked before departure.

In the 1930s, while exploration and colonisation progressed in PNG, Macdhui was the only regular link between PNG and Australia.

Kiaps like Jim Taylor and many missionaries and explorers sailed to PNG on Macdhui. These included the famous Leahy brothers, the gold prospectors and explorers whose legacy, families and businesses still thrive in PNG today.

However, her most critical role came during WWII, when Macdhui was used to evacuate civilians from PNG, then carry Australian troops and medical supplies back to Port Moresby. 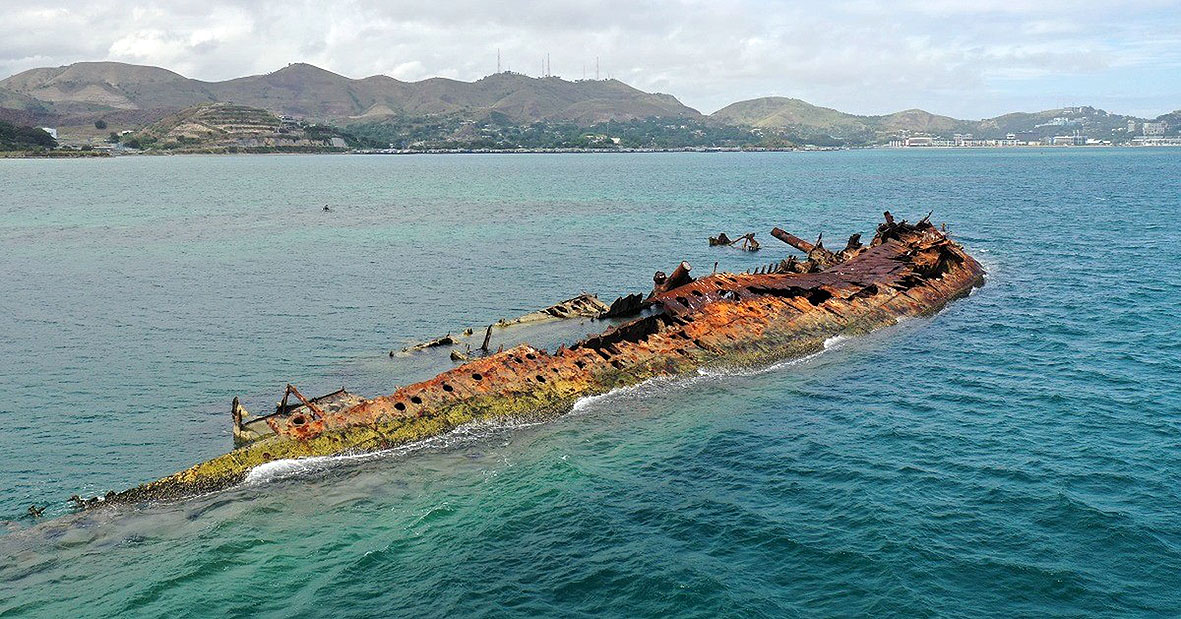 The remains of MV Macdhui in Port Moresby Harbour; 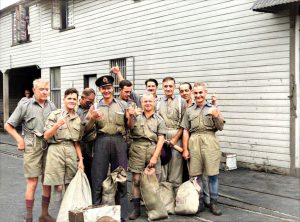 A group of survivors from the Macdhui, sunk in Port Moresby

On 17 June 1942 there was a Japanese air raid over Fairfax Harbour and Port Moresby, led by Navy Lt Renpei Egawa who was based at Vunakanau in Rabaul. Macdhui had arrived from Brisbane on the evening of 12 June 1942, and was docked at Fairfax Harbour after unloading aviation fuel stored in 44-gallon drums. Like all other vessels there, Macdhui avoided bombs from the surprise attack by moving around Fairfax Harbour. The next day, the bombers returned, and while Macdhui’s commander, Capt. J Campbell, was again missing bombs by more skilful manoeuvres, she was hit directly amidships, and lost rudder control.

Of the 68 bombs dropped that day, four hit Macdhui, whereupon she reportedly hit the reef central in the harbour, and rolled on her side, about 750 m offshore. Her captain was killed in the attack, along with ten of the 77 crew, and five Australian gunners. The rest escaped on lifeboats and went ashore with the help of three RAAF medical officers and locals who had been watching the attack from the shore.

Macdhui’s main mast was salvaged in the 1960s and serves as a flag mast at the Royal Papua Yacht Club as well as a memorial to those who died. The Yacht Club also named its restaurant after the MV Macdhui. One of the ship’s bells was removed in the late 60s and is being used at the St John’s Anglican Church in Port Moresby, overlooking Ela Beach.

Like Macdhui, there are countless war wrecks and relics that lie on the sea floors of the harbours which surround the declared ports and harbours from which PNG Ports Corporation Ltd (PNG Ports) operates its 15 ports. In fact, PNG Ports was built upon the scars of both wars.

The foundations of the ports were laid by weary soldiers, and its harbours are the graveyards of countless heroes declared ‘missing in action’.

On Remembrance Day (23 July), PNG Ports remembers these selfless soldiers, fallen in the cause of the free, on another man’s land, each with their own stories, untold.

We also remember our very own, the ‘Fuzzy Wuzzy Angels’, without whom the war with Japan could never have been won.

In the words of Czeslaw Milosz, one of the greatest poets of the 20th Century: ‘The living owe it to those who no longer can speak to tell their story for them.’

We don’t know them all, but we owe them all. Forever shall we remember them.