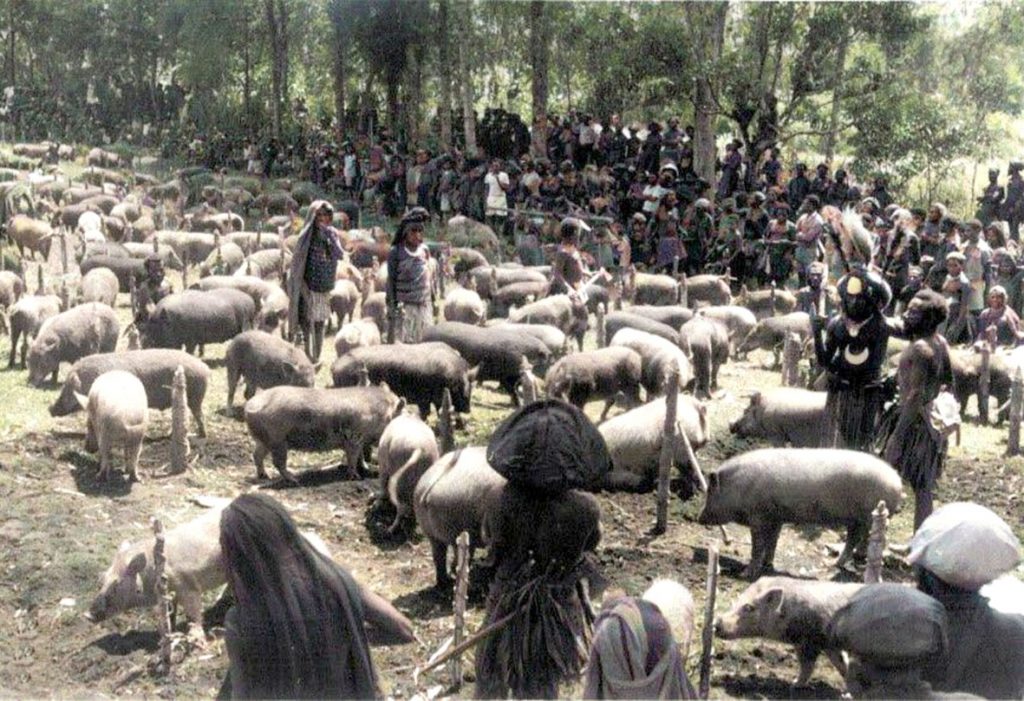 Assembly of pigs for killing

Pigs are widely distributed throughout PNG, although it is not clear how long they have been in the country. However, they have been there long enough to be incorporated into the social and cultural practices of the people. This is especially so in the Highlands where pigs are still used for paying debts, settling disputes and buying brides.

Pigs were owned by men but cared for by women. A characteristic of the husbandry practised in these pig-owning communities was that they were rarely used as a normal part of the diet—rather there were feasts of pig meat held at intervals of three to seven years. These feasts were not only a celebration of pig ownership and the status of their owners, but they also had a role in cementing relationships between groups or in the settlement of long running disputes. Hundreds of pigs could be assembled and killed, and all the body parts subsequently eaten by people whose diet was usually without much protein. 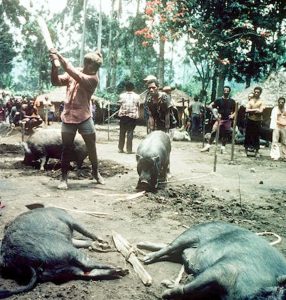 The killing of the pigs

While these pig feasts were times of celebration, they also had some dire consequences. The severe inflammation of the small intestine suffered by some participants often resulted in death. Lajos Roth, a surgeon from Hungary, recognised this disease when working at Goroka Hospital in the early 1960s. He saved the lives of some of these patients by removing affected parts of the intestine and the investigation of the cause of the disease began almost immediately. None of the bacteria or other agents usually associated with gastro-intestinal disease were found in tests done at Goroka Hospital. It seemed to be a new disease and its association with pig feasts was not initially recognised.

Tim Murrell, a recently graduated doctor from Adelaide, was appointed as Government Medical Officer, Goroka in 1960. Apart from his normal duties he began the search for the cause of the ‘new’ disease. His patrols in the Eastern Highlands coincided with a series of pig feasts and following these he encountered deaths and illness, especially in children. Because he was able to carry out limited autopsies on two of the fatal cases, he realised that the deaths were due to the disease described by Roth and therefore recognised the close association with a recent pig feast.

Samples from some of these cases were sent to the School of Tropical Medicine at the University of Sydney but no specific agent of disease could be recognised. Because of its association with pigs and feasting on pigs, the veterinary laboratory of the Department of Agriculture, Stock and Fisheries at Kila Kila was asked to assist the investigation. Tissue samples from surgical and medical cases were sent on ice from Goroka to the laboratory. From some of these samples, John Egerton and his colleagues, Anita Rampling and Patricia Abbott, were able to recover a variety of bacterium known to cause fatal diseases of the gut in sheep, pigs and chickens, but previously unrecognised in humans. These bacteria were sent to specialists in the UK for confirmation of their identity. The only record of something like them and their association with human disease was from a series of cases in Germany shortly after the Second World War. The New Guinea germs were sufficiently different from these, however, to justify their description as a geographic (i.e. New Guinea) variant. 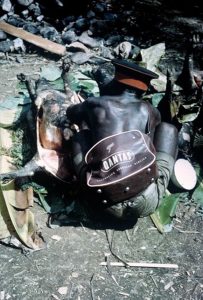 Butcher at work—note the Qantas flight bag, in widespread use in the 1960s

The search now began to find this bacterium in pigs and/or pig meat. A joint medical and veterinary team attended a major pig-kill and feast at Wapenamunda near Wabag in 1963. Samples were collected from pigs before and after slaughter and from the body parts after the completion of the ritual cooking process. The team noted the details of the whole process and saw the many opportunities there were for contamination of meat by the gut content of pigs. There was a degree of skill in the preparation of carcases for cooking in the stone lined pits in the earth—the women carefully washed out the content of the intestines before adding them, with the other organs, to the prepared carcases. Local herbs were added along with kau kau and other vegetables. The temperatures achieved in the cooking process were also recorded by the investigatory team.

These early investigations failed to find any evidence of the bacterium found in the diseased intestine of patients. Although that was a disappointment, the evidence for it being responsible was sufficient to justify the preparation, testing and use of a vaccine to be used against one of the major toxins produced by the bug. Antiserum prepared against a major toxin made by the bacterium was used successfully in treating acute cases of the disease that continued to occur throughout the highlands. The vaccine was later used to protect children against pig bel, as the disease had been named.

The credit for the name pig bel is given to Tei Abal who worked as an orderly in Goroka Hospital—he later became the member for Enga Province in the National Parliament and was subsequently knighted. 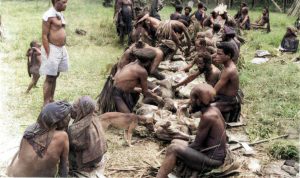 Research into pig bel continued. The people at Wellcome Research Laboratories in London developed a special test for the identification of the pig bel organism. With this test it was easy to show that the culprit was widely distributed in pigs,

in highlanders, and even in a few Europeans. Testing of the vaccine developed by Peter Walker of Wellcome was done by Gregor Lawrence and Frank Shann working from Goroka. Lawrence continued his interest in pig bel after returning to his research institute in Brisbane. Here he developed strong evidence that the humble kau kau has a role in the development of pig bel. He showed in experiments with guinea pigs that kau kau has an inhibitor that prevents inactivation of the toxin of the pig bel bacterium by intestinal protease. (Protease is an enzyme that causes the breakdown of proteins into smaller components). This natural protection occurs in people with normal levels of intestinal protease. The kau kau protease inhibitor resists heat and so survives the cooking process. The investigations at Wabag showed that temperatures reached in the earth ovens were not particularly high and not high enough to kill the spores of bacteria or inactivate the protease inhibitor of kau kau. 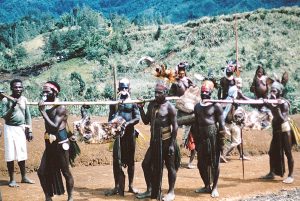 Carcase leftovers on the way home

As information was gathered about pig bel it became clear that most of the severe cases were in children and that many deaths resulted before the vaccine was introduced. In a series of 542 cases operated on at Goroka, 75% were in children under fifteen. Before vaccination was introduced, pig bel was the fourth most frequent cause of death in Highland children after pneumonia, diarrhoea and meningitis. Adults were apparently more resistant and blood tests of normal people later showed evidence of previous experience with the disease.

Several factors have together resulted in a marked decrease in the number of pig bel cases in the Highlands in recent times. The most important of these is awareness of the problem resulting from all the work done by Tim Murrell and his colleagues. The introduction and practice of improved hygiene at slaughter has also helped. Perhaps of greater importance are the cultural and socio-economic changes that have occurred and the consequent decreased frequency of pig feasting. Consequently, the vaccine that was made and used in the twentieth century is no longer available. 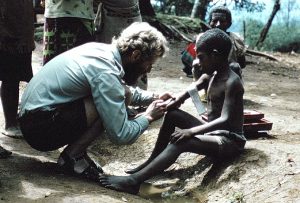 Although there are still occasional reports of pig bel in hospitals in the Highlands, it is no longer a major health problem. When it was first recognised it was thought to be associated only with pig feasting, however more recently it has been found in Thailand and Vietnam. The cases seen by Greg Lawrence in Vietnam were among people who had sweet potato (kau kau) as a staple in their diet. Other sporadic cases have been seen where proteins other than pig meat seem to be involved.

As was the case with the disease ‘Kuru’, the reporting of pig bel created international interest in PNG, its people, and their diseases. As a result of this interest all the information needed to control and effectively eliminate it was acquired and applied in about twenty years.