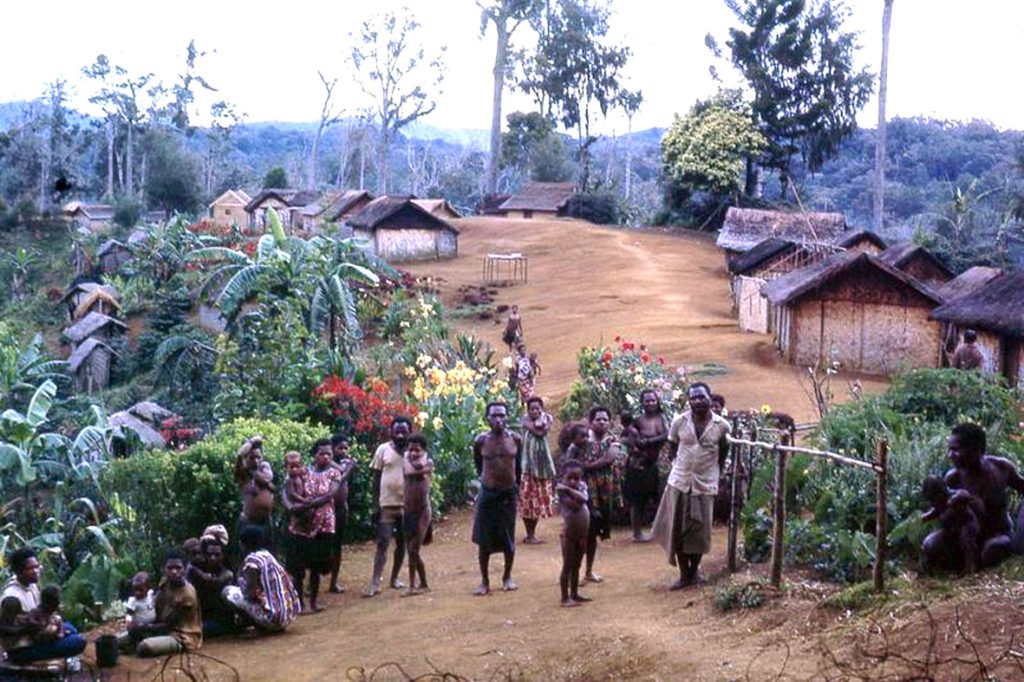 My reason for writing the following is that both the June 2021 and September 2021 issues of PNG Kundu had references to Kuru and Carleton Gajdusek. I never met him as he had departed Okapa in the Eastern Highlands before I arrived. Later when he was in Holland we swapped some correspondence about his traverses around the country. He was pleased to hear of our discovery of his tree blaze.

I worked for Jascar, a Kainantu trading company, in 1967–69 mainly in the Okapa area and then Ralph Trivett and I set up Okapa Trading Company in 1969–70. Our business premises were past the Kuru hospital built by the Lutherans. I remember seeing villagers lined up for census with virtually no females as they had been taken by Kuru. Also, any wetlands had people stricken with Kuru poking around trying to find the packages responsible for their Kuru they believed the sorcerers had buried there.

June 1970, Kainantu was all atwitter about Lawrie Cremin having navigated a dinghy from the Ramu to the Sepik via the inland route. Lots of people were planning similar trips including my boss, Mike Collins, who wanted to do Kainantu to Madang overland.

Ralph Trivett and I decided that we would try for Gimi Valley to Baimuru when the coffee season quietened down. We went to Goroka and spoke to Jim Leahy who told us it would take at least three months.

In late July in 1970 Ralph and I, in the company of John White of New Tribes Mission and the compass from a BBQ sauce bottle, we set off. The promised carriers didn’t show up so we marched off into the bush without them until some locals, feeling embarrassed, picked up our one patrol box and followed.

There was only one village in the lower Gimi that we passed and then it was up and down mountains often on all fours. Fortunately, for every long uphill there was a longer downhill as we headed for the lowlands. There were no sights to be seen as we were continually in dense jungle. Sometimes I could discern a slight difference in the vegetation so we may have been on an old trade route. I noticed that our carriers all plucked leaves as they walked along and this may have been how they marked the trail in days past.

We came at one point to the flimsiest and longest suspension bridge I have ever seen. No sign of population but I think it may have been the Lemari River. The footing was two canes wide and the very low side canes were only one. It was difficult to get our patrol box across.

After this the faint trail petered out and we started hacking our way along creek banks and if it got too steep felling a tree to cross to the other side. No signs of any habitation—just endless square miles of jungle. Our BBQ sauce compass assured us we were heading south which was the right direction.

We now seemed to have reached the lowlands and we started letting off salvos of gunfire to see if it would attract anybody. On day five some Papuan nomads located us and they told us that a Kuru doctor and a kiap had passed through some years ago. They showed us a tree blazed with initials one of which I recognised as CG, Carleton Gajdusek.

The nomads have an interesting lifestyle. Finding a good patch of mature sago trees they make a temporary camp, process the sago, eat it then move on.

These nomads were unknown to the government and a patrol was sent down to ‘discover’ them when we got back and reported their presence. The men had had some contact with the outside world in that oil exploration teams had been up the big river in the fifties. So, they had old style everything including a transistor radio that must have been the first ever off the National brand assembly line. They had very old clothes on when we met them but when they realised we were not official they wore nothing.

One of the biggest banes of our travels were the leeches. They were there in their thousands. They managed to suck through our canvas jungle boots and socks. I counted thirty on one boot. In the morning when we were fresh we took great pains to brush them off but in the afternoon, when tired, we tended to forget about them. Come evening and the boots removed we saw lots of blood—they inject an anti-coagulant and the wounds keep bleeding.

So there we were, our two discoverers took us on a two-day walk to where there was a long house. The men were on one end and separated by a midway wall from the women at the other end. I inquired where they co-habited and they told me ‘in the jungle’. There must have been some hilarious village stories about this custom considering the abounding leeches.

We never saw a woman as they were on the other side of the wall and food was passed across. This was mainly sago in bamboo tubes which is like eating sponge rubber. Speaking of food, I shot a hornbill bird and the old saying of put a stone in the pot and when the stone softens throw away the bird and eat the stone was certainly true in this case.

This settlement was on the banks of a fairly big stream. We sent word downstream that we needed canoes and two days later two showed up. It was a very hairy ride in single dugouts over rapids until reaching the calm Purari River. Here we ditched one canoe and lashed bamboo on both sides of the other and with a couple of locals and three or four Okapaians set off downriver.

Being half starved we gorged on semi-green bananas and pawpaws on reaching the first permanent village. This had the effect of all of us being sick at both ends.

Through the Purari delta country by night, with loud ominous splashing, we eventually reached Kapuna United Mission Hospital where the New Zealand doctors, husband and wife, took care of us all. The New Tribes missionary with us was a guy from Hounslow near London airport. He and his wife had a small operation in the Gimi Valley. There was a bit of an undercurrent of friction when the United Mission doctors at Kapuna discovered that he was a competing missionary.

There was an MAF amphibian there that flew Ralph and me the twelve miles to Baimuru and the Okapa men and John White back to Tarabo near Okapa. This is where I feel all my film went missing. Kodak film was in plastic tubes which were much desired as a lime container for betel-nut chewing. So the only photos that survive are a couple of Polaroids.

Staying in the Baimuru hotel was an experience. There was no air conditioning in those days and hot as hell. My room had a wall mural of an alpine snow scene painted by some character who couldn’t pay his bill and did murals to cover his costs. Lying there in a lather of sweat looking at an alpine scene was unforgettable. Baimuru had maybe a mile of road and a couple of government Land Cruisers but it had maybe thousands of miles of waterways and no government boat.

After a couple of days there I went onto the MV Koki for the voyage to Port Moresby. As it was the south-east season the boat did not travel at night and we anchored off shore at Kerema and at Kairuku on Yule Island. Yule island I remember well as it is the only place I have ever been that in the evening you could not see your bare arm as it was so densely covered by mosquitoes.

I flew back to Lae and then got a lift to Kainantu by Jascar truck—three weeks to the day after we left we were back where we started.